There has been a strong market since 2007 for Uncanceled Mexican bonds. This very speculative demand is unprecedented. It has become obvious that the usual factors that spur demand do not apply in this category. History and graphics are normally important but clearly take a backseat in this very different Uncanceled bond business.

We sell these popular Mexican stocks and bonds as collectibles and as historical documents. It also stressed and clearly stated that they are not negotiable. The most popular types of these stocks and bonds in chronological order include the following 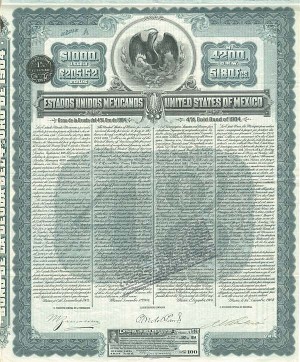