It is fair to say that many of our favorite foreign bonds are the Chinese bonds dating from the late 19th Century to the 1940s. They are appealing for their fascinating history as well as their impressive graphics. Of course, there has also been much speculation in these bonds due to the hope or anticipation that China would someday pay these old debts. There is no question that prices have risen rather dramatically and excitement in this field has grown. The Chinese have become more and more interested in their heritage in the form of coins, paper money, and recently in stocks and bonds. Such new interest as well as other speculation is likely to cause prices to escalate further. We now have a very large inventory of Chinese bonds of the most popular types including the following..

It is interesting to note that we are constantly asked for histories of ownership of bearer bonds. In all our 34 years of buying uncanceled bonds, such histories have never been available. It is extremely rare that owners would ever save receipts of purchases of bonds dated in the late 19th Century to the 1940s. It is important to stress that all these bonds are BEARER bonds, not Registered Bonds. There is no official records that could verify the ownership history of bonds. One could compare a BEARER bond to a $20 bill in ones pocket. It would be rather absurd to ask for a history of ownership of such a piece of paper money. Such demands of histories only encourage legitimate owners of bonds to simply make up histories which cannot be proven or disproven.

Much of the following was taken from the new book Historic Foreign Bonds of China by John M. Thomson published in 2012.

Bearer bonds were unregistered negotiable financial instruments up which interest and principal were payable to the holder of the bond. As the ownership of a bearer bond was not registered with any financial institution, interest and principal would be paid to the holder of the bond regardless of who originally purchased the bond.

Coupons were attached to each bond, and individual coupons represented a single interest payment. The holder of the bearer bond would submit a coupon on a specific date to the issuer of the bond or a designated paying agent, such as a bank, to receive the interest payment. Payment due dates were normally detailed on the bond certificate and it was the usual practice that interest would be at six month intervals.

Bearer bonds were advantageous to certain investors who perhaps wished to shield their finances from the clutches of the tax authorities as owners details would not appear on any financial records.

Bearer bonds were easily negotiated between parties as the owner was not required to register any transfer of ownership.

Nearly all the bonds that we are selling are External Loan Bonds which the Chinese Government negotiated with foreigners. The various bonds that we deal with are of particular interest to collectors for several reasons as follows:

The language of the text on the bond certificates relating to external loans is at least partially in a western language. This allows a small insight into events that took place in China and provides a documentary record of thos events. By contrast, the bond certificates from internal loans were usually written in Chinese characters and it is difficult for a foreigner to translate and understand the text.

China bonds have an inherent historical appeal as some of the loans were related to very specific historical incidents or political situations which occurred in China.

Many China bonds are attractive documents which are aesthetically pleasing, larger and more ornate than most other foreign bonds coupled with quality printing makes them almost works of art.

There were a limited number of Chinese external loans and most are affordable. The possibility of forming a complete collection is quite possible.

Some investors hope that China bonds relating to loans which are in default by trhe Chinese Government, might at some time in the future be redeemed with re-payment of principal and with substantial compensation for lost interest.
In the unlikely event that the current Chinese Government did decide to honour the outstanding debts from the previous Chinese administrations of the turbulent period during the early part of the last century, then the unredeemed bearer bonds may have substantial value. 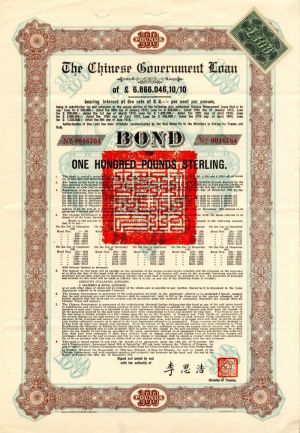