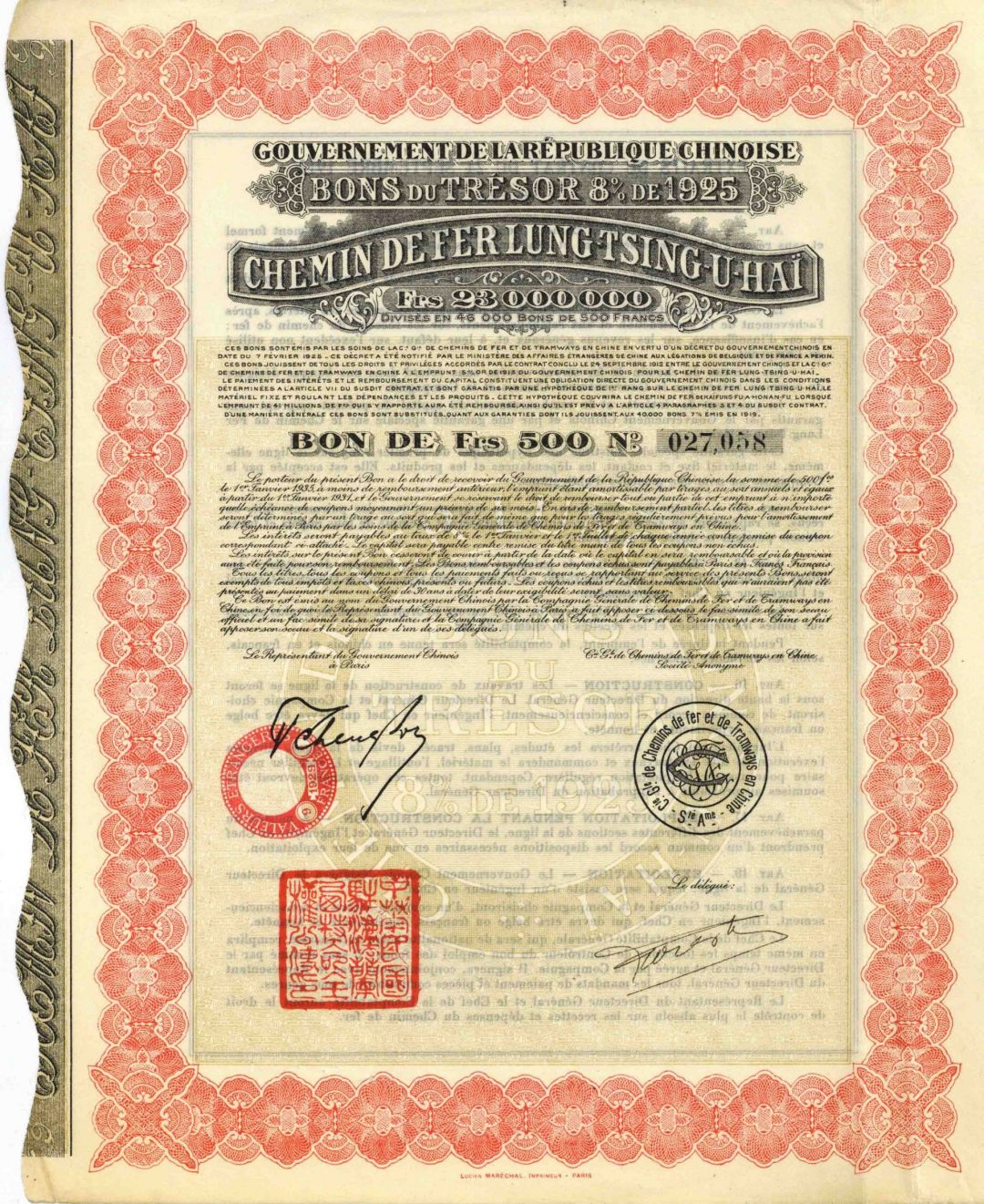 Construction for this railway was from Lanzhou to Lianyungang.

Lanzhou (UK: /lænˈdʒoʊ/, US: /lɒn-/; simplified Chinese: 兰州; traditional Chinese: 蘭州; pinyin: Lánzhōu) is the capital and largest city of Gansu Province in Northwest China. Located on the banks of the Yellow River, it is a key regional transportation hub, connecting areas further west by rail to the eastern half of the country. Historically, it has been a major link on the Northern Silk Road and it stands to become a major hub on the New Eurasian Land Bridge. The city is also a center for heavy industry and petrochemical industry.

In 81 BC, under the Han dynasty (206 BCAD 220), it was taken from the Huns' Huandi Chanyu and made the seat of Jincheng commandery (jùn), and later of the Jincheng (Golden City) county (xiàn), later renamed Yunwu. From at least the first millennium BC it was a major link on the ancient Northern Silk Road, and also an important historic Yellow River crossing site. To protect the city, the Great Wall of China was extended as far as Yumen. Parts of the Great Wall still exist within the built-up area.

After the fall of the Han dynasty, Lanzhou became the capital of a succession of tribal states. In the 4th century it was briefly the capital of the independent state of Liang. The Northern Wei dynasty (386534) reestablished Jincheng commandery, renaming the county Jincheng (金城 'Gold city'). Mixed with different cultural heritages, the area at present-day Gansu province, from the 5th to the 11th century, became a center for Buddhist study. Under the Sui Dynasty (581618) the city became the seat of Lanzhou prefecture for the first time, retaining this name under the Tang dynasty (618907). In 763 the area was overrun by the Tibetan Empire and in 843 was conquered by the Tang. Later it fell into the hands of the Western Xia dynasty (which flourished in Qinghai from the 11th to 13th century) and was subsequently absorbed by the Song dynasty (9601126) in 1081. The name Lanzhou was reestablished, and the county renamed Lanzhuan.

After 1127 it fell into the hands of the Jin dynasty, and after 1235 it came into the possession of the Mongol Empire.

Under the Ming dynasty (13681644) the prefecture was demoted to a county and placed under the administration of Lintao superior prefecture, but in 1477 Lanzhou was reestablished as a political unit.

The city acquired its current name in 1656, during the Qing dynasty. When Gansu was made a separate province in 1666, Lanzhou became its capital.

In 1739 the seat of Lintao was transferred to Lanzhou, which was later made a superior prefecture called Lanzhou.

Lanzhou was badly damaged during the Dungan revolt in 18641875. In the 1920s and 1930s it became a center of Soviet influence in northwestern China.

During the Second Sino-Japanese War (19371945) Lanzhou, linked with Xi'an by highway in 1935, became the terminus of the 3,200 km (2,000 mi) ChineseSoviet highway, used as a route for Soviet supplies destined for the Xi'an area. This highway remained the primary traffic route of northwestern China until the completion of the railway from Lanzhou to Ürümqi, Xinjiang.

Lanzhou's old Donggang Airport, located near the city centre, was the primary entry point for combat aircraft provided to China under the Sino-Soviet Non-Aggression Pact, and along with other targets around Lanzhou, including civilian centers, were heavily bombed by the Imperial Japanese Army Air Force and Navy Air Force. Many air battles were fought between the Chinese Air Force and the Imperial Japanese air forces over Lanzhou and surrounding regions from 1937 to 1945, particularly from 1938 to 1941 when the influx of Soviet war materials formed the primary support in China's War of Resistance against the Imperial Japanese invasion. Instances of major air-battles include an IJAAF raid consisting of 30 BR.20 and Ki-21 bombers against civilian targets in Lanzhou on 20 February 1939; 17th PS, 5th PG commander Capt. Cen Zeliu and his deputy commander Capt. Ma Guolian (Ma Kwok-Lim), a Canadian-Chinese volunteer for the Chinese Air Force, shot down the first two bombers in the battle, followed by two more downed as Capt. Cen led another attack on the third formation. They would be joined by pilots of the Soviet Volunteer Group led by Nikolay Garilov and the 15th PS led by Li Debiao, whom would all shoot down five more of the Japanese bombers; the northern Chinese air-raid early-warning net headquarters in Xi'an observed 21 of the original 30 IJAAF bombers returning from Lanzhou.

As the Imperial Japanese forces were preparing for Operation Z against the United States and other allies in Southeast Asia and the Pacific by mid-1941, the IJANF were busy training new aircrews in live combat action across China for the upcoming war in the Pacific; on 22 May 1941, Lt. Gao Youxin of the 21st PS, 4th PG engaged an IJNAF raid on Lanzhou in an I-16 fighter aircraft, while avoiding confrontation against the Zero fighters, he shot down a Mitsubishi G3M bomber north of Lanzhou. On the ground, the KMT Muslim Generals Ma Hongkui and Ma Bufang protected Lanzhou with their cavalry troops, putting up such resistance that the Japanese never captured Lanzhou.

The city is the seat of a currently vacant Roman Catholic diocese and was previously the center of a vicariate apostolic (Vicariate Apostolic of Northern Kan-Su).

Lianyungang (simplified Chinese: 连云港; traditional Chinese: 連雲港; pinyin: Liányúngǎng) is a prefecture-level city in northeastern Jiangsu province, China. It borders Yancheng to its southeast, Huai'an and Suqian to its south, Xuzhou to its southwest, and the province of Shandong to its north. Its name derives from Lian Island, the largest island in Jiangsu which lies off its coastline, and Yuntai Mountain, the highest peak in Jiangsu, a few miles from the city center, and the fact that it is a port. The name can be literally translated as the Port Connecting the Clouds.

Lianyungang was home to 4,599,360 inhabitants as of the 2020 census whom 1,210,767 lived in the built-up (or metro) area made of Haizhou and Lianyun counties. Lianyungang was known in the West as Haichow (Postal romanization), which means the City of Sea. Haichow was opened to foreign trade by the Qing imperial government in 1905.

The Longhai railway (simplified Chinese: 陇海铁路; traditional Chinese: 隴海鐵路; pinyin: Lǒnghǎi Tiělù), formerly romanized as the Lunghai railway, is a major arterial eastwest railway in China. It runs from Lianyungang, Jiangsu on the Yellow Sea to Lanzhou, Gansu through the provinces of Jiangsu, Anhui, Henan, Shaanxi, and Gansu, covering a total length of 1,759 kilometres. The line is named after Gansu, also known as Long (陇) in Chinese and Lianyungang's previous name, Haizhou. The Longhai Line is one of the busiest Chinese railways. It has dual tracks throughout the whole line, and the lines between Xuzhou, Jiangsu and Lanzhou, Gansu has been electrified.

The Longhai railway was built over the course of half a century by four different governments of China: the Qing Dynasty, Beiyang Government, Nationalist Republican government and the Communist government of the People's Republic.

The first section of the railway, entirely within Henan, from Kaifeng to Luoyang was built from 1905 to 1909 by a venture between the Qing Dynasty and a Belgian joint-stock company backed by France and Russia. This line, known as the BianliangLuoyang railway, began operation on January 1, 1910.

The line was extended eastward to Xuzhou in 1916 and to Haizhou in 1923 with Dutch financing. In the west, the line was extended to Lingbao, Henan in 1927 with Belgian financing. After the Northern Expedition, the Nanjing-based Republican government took control of construction and extended the line further west to Tongguan, Shaanxi in 1931, to Xi'an in 1934, to Baoji, Shaanxi in 1936 and Tianshui, Gansu in 1945.

The railway was the centerpiece of Japanese operations in Henan during the Second Sino-Japanese War, with the Imperial Japanese Army repeatedly attempting to seize the railway in 1938 in the Battle of Northern and Eastern Henan and later during Operation Ichi-go.

Construction of the Tianshui to Lanzhou section, entirely within Gansu, broke ground in May 1946 but was halted by Chinese Civil War, then resumed under the People's Republic in April 1950 and was completed in July 1953. At this time, the entire Longhai railway entered into operation.

In the late 1950s through early 1960s, new railways were built from Lanzhou to the west: the Lanxin railway to Xinjiang (later connected to Kazakhstan) and the Lanqing railway to Qinghai (later extended to Tibet).

From 1956 to 1970, the section between Zhengzhou, Henan to Baoji, Shaanxi was upgraded to the dual-track line. During the same time, in Henan the line near Sanmenxia was re-routed due to the Sanmenxia Reservoir Project. Zhengzhou to Shangqiu section was converted to dual-track in 1980.

The railway is a central section in the New Eurasian Land Bridge.

Cities and rail junctions along route