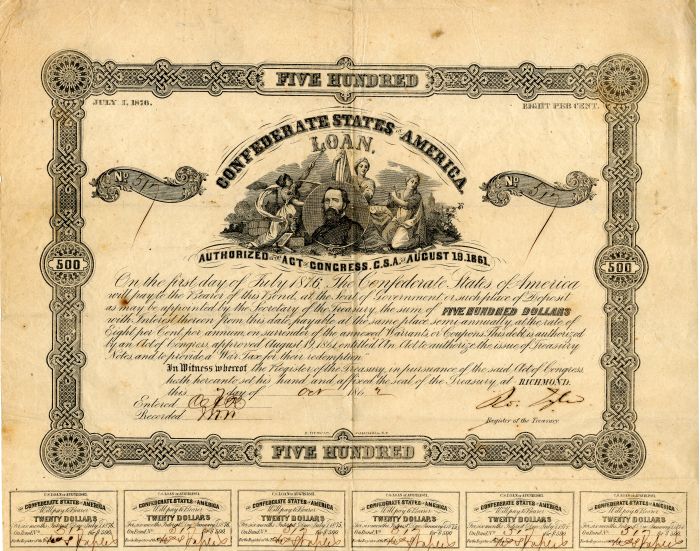 The Confederacy was established by the Montgomery Convention in February 1861 by seven states (South Carolina, Mississippi, Alabama, Florida, Georgia, Louisiana, adding Texas in March before Lincoln's inauguration), expanded in MayJuly 1861 (with Virginia, Arkansas, Tennessee, North Carolina), and disintegrated in AprilMay 1865. It was formed by delegations from seven slave states of the Lower South that had proclaimed their secession from the Union. After the fighting began in April, four additional slave states seceded and were admitted. Later, two slave states (Missouri and Kentucky) and two territories were given seats in the Confederate Congress.

Southern nationalism was rising and pride supported the new founding. Confederate nationalism prepared men to fight for "The Southern Cause". For the duration of its existence, the Confederacy underwent trial by war. The Southern Cause transcended the ideology of states' rights, tariff policy, and internal improvements. This "Cause" supported, or derived from, cultural and financial dependence on the South's slavery-based economy. The convergence of race and slavery, politics, and economics raised almost all South-related policy questions to the status of moral questions over way of life, merging love of things Southern and hatred of things Northern. Not only did political parties split, but national churches and interstate families as well divided along sectional lines as the war approached. According to historian John M. Coski,

The statesmen who led the secession movement were unashamed to explicitly cite the defense of slavery as their prime motive ... Acknowledging the centrality of slavery to the Confederacy is essential for understanding the Confederate.

Southern Democrats had chosen John Breckinridge as their candidate during the U.S. presidential election of 1860, but in no Southern state (other than South Carolina, where the legislature chose the electors) was support for him unanimous, as all of the other states recorded at least some popular votes for one or more of the other three candidates (Abraham Lincoln, Stephen A. Douglas and John Bell). Support for these candidates, collectively, ranged from significant to an outright majority, with extremes running from 25% in Texas to 81% in Missouri. There were minority views everywhere, especially in the upland and plateau areas of the South, being particularly concentrated in western Virginia and eastern Tennessee.

Following South Carolina's unanimous 1860 secession vote, no other Southern states considered the question until 1861, and when they did none had a unanimous vote. All had residents who cast significant numbers of Unionist votes in either the legislature, conventions, popular referendums, or in all three. Voting to remain in the Union did not necessarily mean that individuals were sympathizers with the North. Once fighting began, many of these who voted to remain in the Union, particularly in the Deep South, accepted the majority decision, and supported the Confederacy.

Many writers have evaluated the Civil War as an American tragedya "Brothers' War", pitting "brother against brother, father against son, kin against kin of every degree".