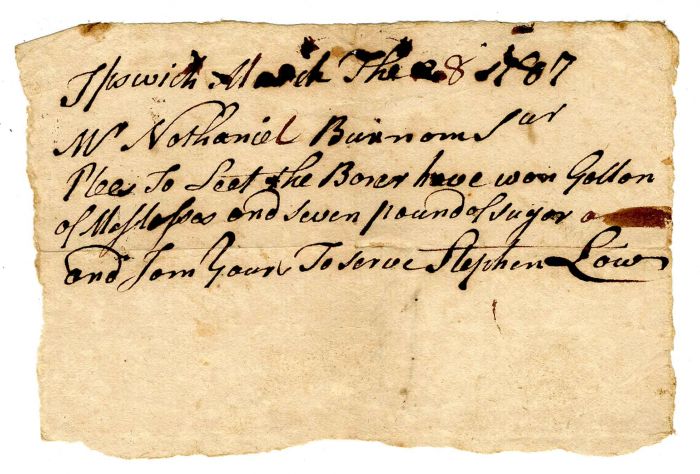 Ipswich is a coastal town in Essex County, Massachusetts, United States. The population was 13,785 at the 2020 census. Home to Willowdale State Forest and Sandy Point State Reservation, Ipswich includes the southern part of Plum Island. A residential community with a vibrant tourism industry, the town is famous for its clams, celebrated annually at the Ipswich Chowderfest, and for Crane Beach, a barrier beach near the Crane estate. Ipswich was incorporated as a town in 1634.

Ipswich was founded by John Winthrop the Younger, son of John Winthrop, one of the founders of the Massachusetts Bay Colony in 1630 and its first governor, elected in England in 1629. Several hundred colonists sailed from England in 1630 in a fleet of 11 ships, including Winthrop's flagship, the Arbella. Investigating the region of Salem and Cape Ann, they entertained aboard the Arbella for a day, June 12, 1630, a native chief of the lands to the north, Chief Masconomet. The event was recorded in Winthrop's journal on the 13th, but Winthrop did not say how they overcame the language barrier. The name they heard from Masconomet concerning the country over which he ruled has been reconstructed as Wonnesquamsauke, which the English promptly rendered into the anglicized "Agawam". The colonists, however, sailed to the south where some buildings had already been prepared for them at a place newly named Charlestown.

That winter they lost a few hundred colonists from malnutrition and disease. They also experienced their first nor'easter, which cost them some fingers and toes, as well as houses destroyed by the fires they kept burning day and night. Just as Winthrop was handing out the last handful of grain, the supply ship Lyon entered Boston Harbor. John now sent for his family in England, but his then wife, Margaret, her children, and his eldest son, John, whose mother was the elder John's first wife, Mary Forth, did not arrive until November, on the Lyon.

John the Younger resided with his father and stepmother until 1633, when he resolved to settle in Agawam, with the permission of the General Court of Massachusetts. Captain John Smith had written about the Angoam or Aggawom region in 1614, referring to it as "an excellent habitation, being a good and safe harbour."

John the Younger and 12 men aboard a shallop sailed into Ipswich harbor and took up residence there. Two men continued up the river (now River Road) to a large meadow, which they called New Meadows, now Topsfield. Agawam was incorporated on August 5, 1634, as Ipswich, after Ipswich in the county of Suffolk, England. The name "Ipswich" was taken "in acknowledgment of the great honor and kindness done to our people which took shipping there." Nathaniel Ward, an assistant pastor in town from 1634 to 1636, wrote the first code of laws for Massachusetts and later published the religious/political work, The Simple Cobbler of Aggawam in America in England.

In 1638, Masconomet entered into a contract with John Winthrop the Younger for the purchase of Ipswich for "wampampeage, & other things: and ... also for the sume [sic] of twenty pounds." There is no record of any native resistance to the colonization either at Charlestown or at Agawam, though there is documentation of devastating virgin soil epidemics among indigenous people in the area around 1617 and again in 1633, and contemporary reports attest to ghost towns encountered by early English settlers.

Pioneers would become farmers, fishermen, shipbuilders or traders. The tidal Ipswich River provided water power for mills, and salt marshes supplied hay for livestock. A cottage industry in lace-making developed. Ipswich Lace is a unique style, and the only known hand-made bobbin lace to be produced commercially in America. But in 1687, Ipswich residents, led by the Reverend John Wise, protested a tax imposed by the governor, Sir Edmund Andros. As Englishmen, they argued, taxation without representation was unacceptable. Citizens were jailed, but then Andros was recalled to England in 1689, and the new British sovereigns, William III and Mary II, issued colonists another charter. The rebellion is the reason the town calls itself the "Birthplace of American Independence".

Great clipper ships of the 19th century, however, bypassed Ipswich in favor of the deep-water seaports at Salem, Newburyport, Quincy, and Boston. The town remained primarily a fishing and farming community, its residents living in older homes they could not afford to replaceleaving Ipswich with a considerable inventory of early architecture. In 1822, a stocking manufacturing machine which had been smuggled out of England arrived at Ipswich, violating a British ban on exporting such technology, and the community developed as a mill town. In 1828, the Ipswich Female Seminary was founded. In 1868, Amos A. Lawrence established the Ipswich Hosiery Mills beside the river. It would expand into the largest stocking mill in the country by the turn of the 20th century. What may be the last witchcraft trial in North America was held in Ipswich in 1878. In the Ipswich witchcraft trial, a member of the Christian Science religion was accused of using his mental powers to harm others, including a spinster living in the town.

In 1910, Richard T. Crane Jr. of Chicago, the business magnate owner of Crane Plumbing, bought Castle Hill, a drumlin on Ipswich Bay. He hired Olmsted Brothers, successors to Frederick Law Olmsted, to landscape his 3,500-acre (14 km2) estate, and engaged the Boston architectural firm of Shepley, Rutan & Coolidge to design an Italian Renaissance-Revival style villa on the summit. A grande allée, 160 feet (49 m) wide and lined with statuary, would run the half mile from house to sea. But his wife, Florence, loathed the building. Crane promised that if she still didn't like it in 10 years, he would replace it. True enough, in 1928 a new 59-room mansion designed by Chicago architect David Adler in the English Stuart style stood in its place, called the Great House. At Mrs. Crane's death in 1949, the entire property was bequeathed to The Trustees of Reservations, which uses it as a venue for concerts and weddings.

The town government was reformed in 1950 with the acceptance of the Town Manager Charter. This charter was rescinded by the voters, regained, lost again, and the present Town Manager-Selectmen Charter was adopted by the voters in 1967. In 2012 Ipswich hired its first female Town Manager, Robin Crosbie, who served until her retirement in 2018.

Condition: Good
Item ordered may not be exact piece shown. All original and authentic.
OUT OF STOCK
Request re-stock notice?
Email this to a friend
Request Info
Previous Item (City of Philadelphia - $100)    (Civil War Discharge Papers) Next Item