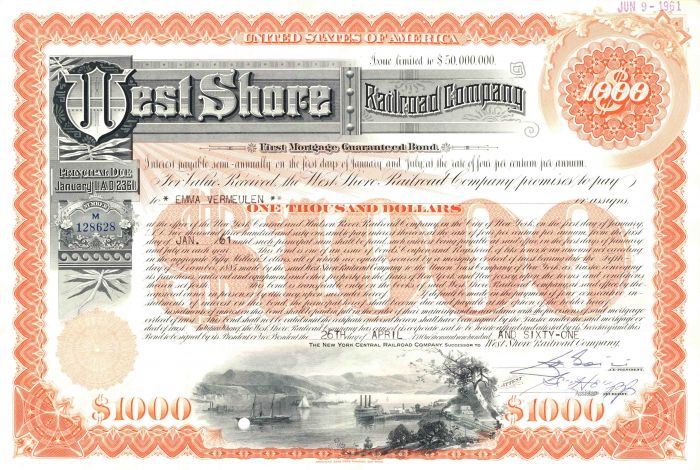 The West Shore Railroad was the final name of a railroad that ran from Weehawken, New Jersey, which is across the Hudson River from New York City, north along the west shore of the river to Albany, New York, and then west to Buffalo. It was organized as a competitor to the New York Central and Hudson River Railroad, but was soon taken over by that company.

The first part of the line was built as the Saratoga and Hudson River Railroad, incorporated April 16, 1864, and opened in Spring 1866. After only about a year of independent operation, the line served as a branch of the New York Central Railroad (NYC), splitting at Athens Junction near Schenectady and running southeast and south along the west side of the Hudson River to Athens, New York. Early plans included acquiring the Saratoga and Schenectady Railroad as a northern extension. The Saratoga and Hudson River was bought and merged into the New York Central as their Athens Branch on September 9, 1867.

The terminal at Athens was destroyed by fire in 1876. The line ran intermittently from then into the 1880s, with its tracks being torn up for good in 1888. It had been called the "White Elephant" Railroad for most of its existence because it quickly outlived whatever usefulness it may have had. Today a row of brick houses known as the Brick Row Historic District which was built in 1850 for the workers of the failed railroad stand in Athens as the only remaining structure related to the "White Elephant" Railroad project.

The line first opened in 1872 as a spur of the New Jersey Midland Railway, which had built the section south of Ridgefield Park. At that time, the northern terminus was at Tappan; the extension north to Haverstraw, New York, opened in 1879.

Bankruptcy struck soon, and the New York section of the line was sold on September 28, 1877, and reorganized October 12, 1878, as the Jersey City and Albany Railway. The part in New Jersey was sold August 17, 1878, and reorganized with the same name, and the two companies merged in January 1879 to form a consolidated Jersey City and Albany Railway.

In 1883, the newly formed company inaugurated service from Newburgh and Jersey City at the Pennsylvania Railroad Depot, where passengers transferred to ferries across the river.

A new alignment was built along the east side of the New York, Susquehanna and Western Railway (formerly the New Jersey Midland) to North Bergen. By 1886, service operated to Weehawken Terminal through a tunnel under Bergen Hill that had been built in the three preceding years.

The company leased the Athens Branch of the New York Central and Hudson River Railroad, the old Saratoga and Hudson River Railroad, and incorporated it into their main line between Coxsackie and Fullers. At Ravena, along the Athens Branch, the main line turned northwest towards Schenectady, while a new branch continued north to Kenwood Junction on the Albany and Susquehanna Railroad in Albany. This full line formed an immediate threat to the NYC monopoly.

The West Shore also had relations with the Boston, Hoosac Tunnel and Western Railway (BHT&W), which would have run from the Hoosac Tunnel in Massachusetts west to Buffalo. Instead the BHT&W built only to Rotterdam Junction west of Schenectady; it was later taken over by the Fitchburg Railroad.

In 1881, the WS had been planned as a link in a new cross-country line from New York to San Francisco, using the Nickel Plate Road, Chicago, Milwaukee and St. Paul Railway, Northern Pacific Railroad and Oregon Navigation Company. However, William Henry Vanderbilt of the NYC had bought the Nickel Plate in 1882, killing that plan. The NYC then proceeded to drive the New York, West Shore and Buffalo into bankruptcy.

In many sections, the WS ran on a straighter path than the NYC, and was thus used for through freight. For instance, between Oneida and Utica, the WS followed the general line of the never-built Syracuse and Utica Direct Railroad, which had been merged into the NYC.

Passenger service on the line ended to Albany in 1958 and to West Haverstraw in 1959, ending direct New York Central train service on the west side of the Hudson River. The line became part of Penn Central in 1968, and passed to Conrail in 1976 after Penn Central's bankruptcy. When Conrail was divided between CSX Transportation and Norfolk Southern, the West Shore Railroad, along with most of the old New York Central lines, became part of CSX.

It became CSX's River Subdivision, which begins west of the Hudson Palisades at North Bergen Yard in Hudson County, New Jersey. Proceeding north it passes through Bergen County and Rockland County, New York, and up the west side of the Hudson River to Selkirk Yard, from which there are connections to points west and east. South of North Bergen Yard it connects to the Northern Running Track, part of Conrail. The tunnel under the Palisades is part of the Hudson Bergen Light Rail which emerges at the Hudson Waterfront at Weehawken Port Imperial.

Throughout the late 1980s and early 1990s, New Jersey Transit, the main provider of contemporary rail and bus service in the locale, expressed interest in potentially restoring passenger service to the line due to ever-increasing ridership on the local bus lines.

In 1997, a $3.97 million grant was given to New Jersey Transit by the Federal Transit Administration. At the time, many towns along the line supported the idea, and went as far as conducting zoning procedures to allow room for the new additions the railroad would bring. Considering the current line is not under proprietorship of New Jersey Transit, a new right-of-way would be installed parallel to the existing freight line.

However, funding remained an issue, as did disagreement with CSX. Ultimately, focus on the project was dropped in favor of progress on the Northern Branch Corridor Project and Meadowlands Rail Line (completed in 2009). An official status on the project has not since been noted.

Item ordered may not be exact piece shown. All original and authentic.
Email this to a friend
Request Info
Previous Item (Union Pacific Corporation - Bond)    (A Complete Collection of "America's Great Railroads") Next Item