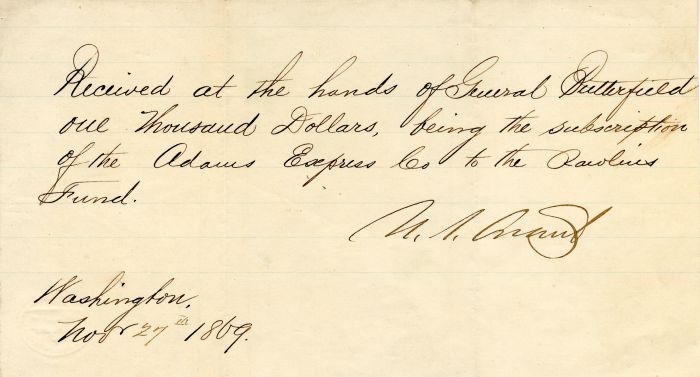 Receipt signed by U.S. Grant and written entirely in his hand while in his 1st year of his presidency!

Ulysses S. Grant (born Hiram Ulysses Grant; April 27, 1822  July 23, 1885) was an American soldier and politician who served as the 18th president of the United States from 1869 to 1877. Before his presidency, Grant led the Union Army as Commanding General of the United States Army in winning the American Civil War. As president, Grant worked with the Radical Republicans in the Reconstruction of the Union while having to deal with corruption in his administration.

Raised in Ohio, young Grant possessed an exceptional ability with horses, which served him well through his military career. He was admitted to West Point and graduated from the U.S. military academy in 1843. Grant served with distinction in the MexicanAmerican War. In 1848, he married Julia Dent, and together they had four children. Grant abruptly resigned his army commission in 1854 and returned to his family, but lived in poverty for seven years. During the Civil War, he joined the Union Army in 1861, and led the Vicksburg campaign, which gained control of the Mississippi River in 1863. After Grant's victory at Chattanooga, President Abraham Lincoln promoted Grant to Lieutenant General. For thirteen months, Grant fought Robert E. Lee during the high casualty Overland Campaign and at Petersburg. On April 9, 1865, Lee surrendered to Grant at Appomattox. A week later, Lincoln was assassinated, and was succeeded by President Andrew Johnson, who promoted Grant to General of the Army in 1866. Later Grant openly broke with Johnson over Reconstruction policies; Grant used the reconstruction acts, which had been passed over Johnson's veto, to enforce civil rights for African freedmen.

A war hero but a reluctant politician, Grant was unanimously nominated by the Republican Party and was elected president in 1868. As president, Grant stabilized the post-war national economy, created the Department of Justice, and prosecuted the Ku Klux Klan. He appointed African-Americans and Jewish-Americans to prominent federal offices. In 1871, he created the first Civil Service Commission. The Liberal Republicans and Democrats united behind Grant's opponent in the presidential election of 1872, but Grant was handily re-elected. Grant's Native American policy had both successes and failures. In foreign affairs, the Grant administration peacefully resolved the Alabama claims against Great Britain, but the Senate rejected Grant's prized Caribbean Dominican Republic annexation. Corruption in the executive branch became notorious: several of Grant's cabinet members and other appointees were fired or had to resign. The Panic of 1873 plunged the nation into a severe economic depression, that allowed the Democrats to win the House majority. In the intensely disputed Presidential election of 1876, Grant facilitated the approval by Congress of a peaceful compromise.

In his retirement, Grant was the first president to circumnavigate the world on his tour meeting with many foreign leaders. In 1880, Grant was unsuccessful in obtaining the Republican presidential nomination for a third term. In the final year of his life, facing severe financial reversals and dying of throat cancer, he wrote his memoirs, which proved to be a major critical and financial success. At the time of his death, he was memorialized as a symbol of national unity.

Historians have recognized Grant's military genius, and his modern strategies of warfare are featured in military history textbooks. Historical assessments of Grant's presidency have improved over time. Grant was ranked 38th in 1994 and 1996, but ranked 21st in 2018. Historians have emphasized Grant's presidential accomplishments including the Alabama Claims settlement, protection of Blacks and Indians, and the first Civil Service Commission.