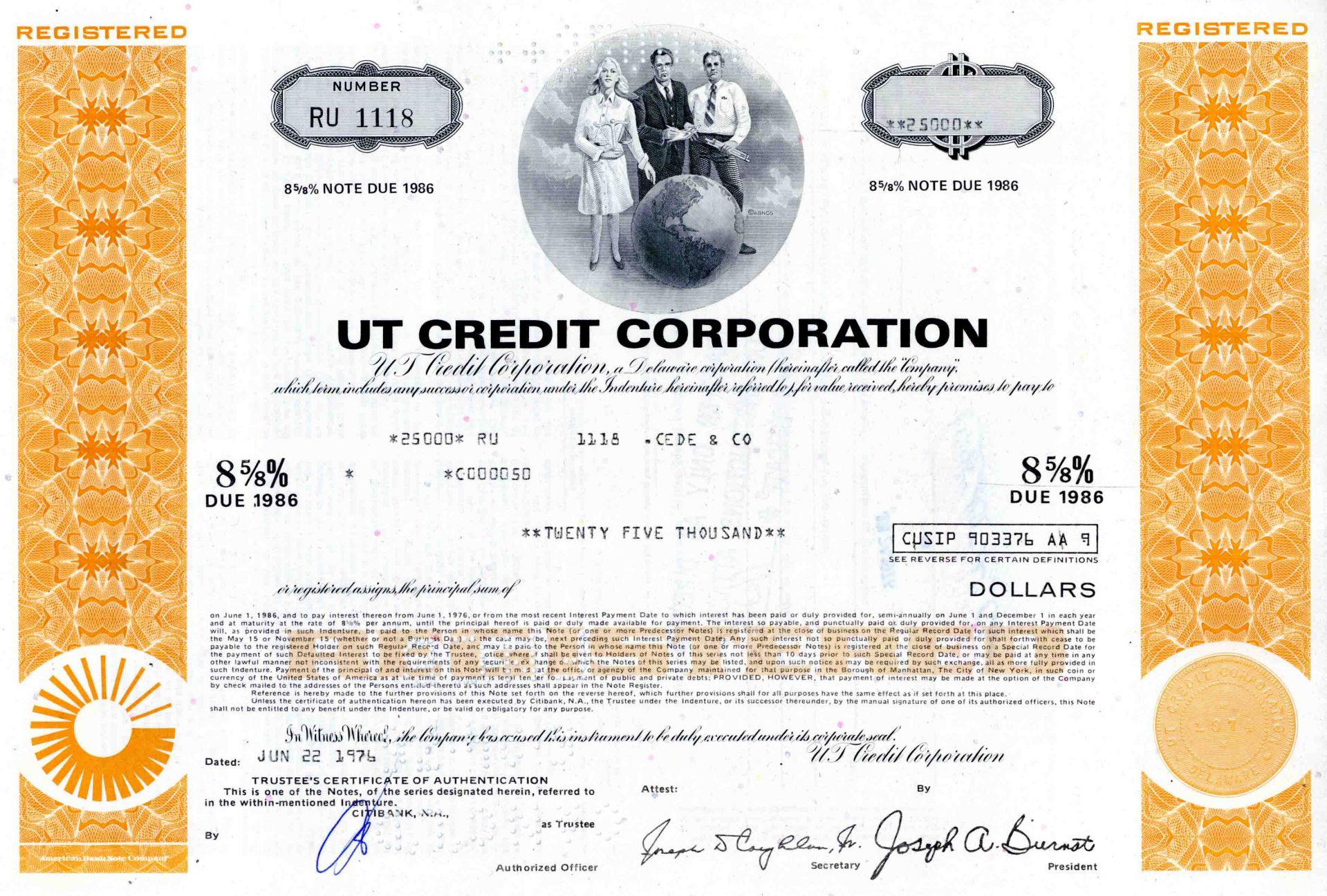 United Technologies Corporation (UTC) was an American multinational conglomerate headquartered in Farmington, Connecticut. It merged with the Raytheon Company in April 2020 to form Raytheon Technologies. It researched, developed, and manufactured products in numerous areas, including aircraft engines, aerospace systems, HVAC, elevators and escalators, fire and security, building automation, and industrial products, among others. UTC was also a large military contractor, getting about 10% of its revenue from the U.S. government. Gregory J. Hayes was the CEO and chairman.

In 1974, Harry Gray left Litton Industries to become the CEO of United Aircraft. He pursued a strategy of growth and diversification, changing the parent corporation's name to United Technologies Corporation (UTC) in 1975 to reflect the intent to diversify into numerous high tech fields beyond aerospace. (The change became official on May 1, 1975.) The diversification was partially to balance civilian business against any overreliance on military business. UTC became a mergers and acquisitions (M&A)focused organization, with various forced takeovers of unwilling smaller corporations. The next year (1976), UTC forcibly acquired Otis Elevator. In 1979, Carrier Refrigeration and Mostek were acquired; the Carrier deal was forcible, while the Mostek deal was a white knight move against hostile takeover designs by Gould.

At one point, the military portion of UTC's business, whose sensitivity to "excess profits" and boom/bust demand drove UTC to diversify away from it, actually carried the weight of losses incurred by the commercial M&A side of the business. Although M&A activity was not new to United Aircraft, the M&A activity of the 1970s and 1980s was higher-stakes and arguably unfocused. Rather than aviation being the central theme of UTC businesses, high tech (of any type) was the new theme. Some Wall Street watchers questioned the true value of M&A at almost any price, seemingly for its own sake.

Mostek was sold in 1985 to the French electronics company Thomson.

In 2003, UTC entered the fire and security business by purchasing Chubb Security.

In 2004, UTC acquired the Schweizer Aircraft Corporation which planned to operate as a wholly owned subsidiary under their Sikorsky Aircraft division.

In March 2008, UTC made a $2.63 billion bid to acquire Diebold, a Canton, Ohio based manufacturer of banking and voting machines. Diebold rejected the buyout bid as inadequate.

In December 2009, it was announced that UTC would acquire a 49.5% stake in Clipper Windpower for $206 million.

In April 2010, UTC announced that it was investing 15 million ($20 million) to set up the United Technologies Research Centre Ireland at University College Corks Tyndall National Institute which will carry out research on energy and security systems.

In October 2010, UTC agreed with Clipper to acquire the rest of the company.

Also in 2010, UTC conducted its largest acquisition up to this year, General Electric's security equipment business for US$1.8 billion, a move to support UTC's Fire & Security unit.

In June 2012, it was discovered that UTC sold military technology to the Chinese. For pleading guilty to violating the Arms Export Control Act and making false statements, United Technologies and its subsidiaries were fined $75 million.

In July 2012, United Technologies acquired Goodrich and merged it with Hamilton Sundstrand; the resulting organization is UTC Aerospace Systems.

In February 2013, UTC Power was sold to ClearEdge Power.

In October 2014, Toshiba and United Technologies made a deal to expand their joint venture outside Japan.

In February 2016, UTC subsidiary Carrier Air Conditioner announced to employees at its Indianapolis and Huntington plants, that Carrier is moving manufacturing to Mexico: "The best way to stay competitive and protect the business for long-term is to move production from our facility in Indianapolis to Monterrey, Mexico. " In December, Carrier agreed to keep the Indianapolis plant open, keeping 700 jobs in Indianapolis. The plant in Huntington, Indiana would still close their doors, leaving 700 employees jobless.

On September 4, 2017, UTC proposed to acquire Rockwell Collins in cash and stock for $23 billion, $30 billion including Rockwell Collins' net debt, for $500+ million of synergies expected by year four.

On November 26, 2018, the company announced the Rockwell Collins deal had closed, and that it will split into three independent companies. Pratt and Whitney and the newly formed Collins Aerospace will remain under United Technologies, while Otis Elevator and UTC Climate, Controls & Security (doing business as Carrier) will be spun off as two independent companies.

In June 2019, United Technologies announced the intention to merge with defense contractor Raytheon to form Raytheon Technologies Corporation. The combined company, valued at more than $100 billion after planned spinoffs, would be the world's second-largest aerospace-and-defense company by sales behind Boeing. Although UTC will be the nominal survivor, the merged company will be headquartered in Waltham, Massachusetts, where Raytheon is based.

In March 2020, United Technologies Corporation announced the separations of Carrier and Otis.

In April 2008, Louis Chênevert succeeded George David as the company's chief executive officer (CEO). Chênevert served until 2014, when he was succeeded by Gregory Hayes.

The chief financial officer's (CFO) position was held by Gregory Hayes until 2014, when he succeeded Louis Chênevert as CEO.

The chairman of the board of directors (Chairperson) position went to Louis Chênevert, then the company's CEO, in January 2010, succeeding George David.

For the fiscal year 2017, United Technologies reported earnings of US$4.552 billion, with an annual revenue of US$59.837 billion, an increase of 4.5% over the previous fiscal cycle. United Technologies shares traded at over $114 per share, and its market capitalization was valued at US$98.6 billion in October 2018. UTC ranked No. 51 in the 2018 Fortune 500 list of the largest United States corporations by total revenue.

During the 2004 election cycle, UTC was the sixth largest defense industry donor to political campaigns, contributing a total of $789,561. Sixty-four percent of UTC's 2004 contributions went to Republicans. UTC was also the sixth largest donor to federal candidates and political parties in the 2006 election cycle. Thirty-five percent of those contributions went to Democrats; 53% of the funds were contributed to Republicans.

In 2005, United Technologies was among 53 entities that contributed the maximum of $250,000 to the second inauguration of President George W. Bush.

In 1981, a contribution from UTC made possible the exhibition "Paris/Magnum: Photographs 19351981", featuring photographs of Paris taken by photographers of Magnum Photos, the agency founded in 1947 by Robert Capa, George Rodger, Henri Cartier-Bresson, William Vandivert, and David Seymour. A volume of the same title, with text by Irwin Shaw and an introduction by Inge Morath, was also published in 1981.

UTC is the sponsor of the exhibition "Aphrodite and the Gods of Love" at Boston's Museum of Fine Arts that opened in fall 2011.

UTC and its subsidiaries are major contributors to museums such as the New England Air Museum.

In April 2015, UTC signed an education partnership agreement with the China Friendship Foundation for Peace and Development, a united front organization under the control of the Chinese People's Association for Friendship with Foreign Countries.

Researchers at the University of Massachusetts Amherst have identified UTC. as the 38th-largest corporate producer of air pollution in the United States as of 2008. UTC released roughly 110,000 pounds (50,000 kg) of toxic chemicals annually into the atmosphere including manganese, nickel, chromium and related compounds.

In the 2016 University of Massachusetts Amherst Toxic 100 Air Polluters Index, UTC was ranked 9th by a toxicity population exposure score. It was also reported they release 60,000 pounds (27,200 kg) of toxins into the air.