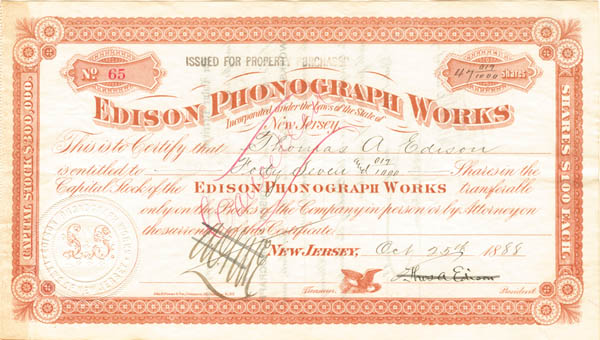 Thomas Alva Edison (1847-1931), considered the greatest Inventor in history. His formal education lasted only three months. He was home schooled by his Mother at the age of 9, she bought him a chemistry book. That began his interest in Chemistry and testing experiments. As a youth he sold newspapers and snacks on the Grand Trunk Railway. While aboard the train he conducted chemical experiments. In 1868 he worked as a telegrapher in Boston. His first invention, an electrographic vote recorder, was patented in 1869. He also took out patents for an improved stock ticker, a telegraph device used to report the price of gold to brokers' offices. In 1876 he moved his laboratory to Menlo Park, NJ. In 1879, he made commercially practicable the incandescent lamp, but did not invent it. Other inventions included the kinetoscope, ore-mill machinery, the storage battery, and dictating machine. He invented the phonograph, his greatest single achievement from the viewpoint of inventive imagination. In 1888, he founded the Edison Phonograph Works. New Jersey stock dated 1888 signed at front with ink cancellation line, issued to Edison and beautifully signed at back. Very Rare! Exceptional example!