Thomas A. Edison, Charles A. Edison - Meetings of Meeting 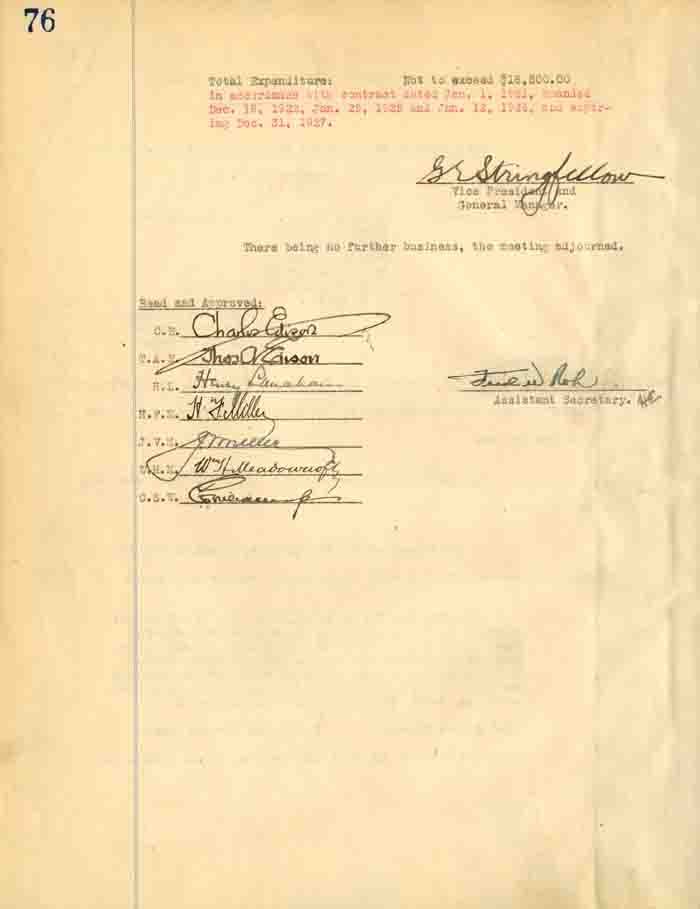 Years: 1910 or so
This page is the signature sheet of the minutes of the meeting of the Edison Storage Battery Company. Dates about 1910 or so. It is autographed by Thomas A. Edison, his son Charles Edison and his private secretary Harry F. Miller. All bold attractive signatures. Also available for the Edison Manufacturing Company signed by both Charles and Thos. A. Edison and others dated 1926 for $1,400. Exceptional Condition. Please specify variety.

Thomas A. Edison (1847-1931) Edison had a late start in his schooling due to childhood illness. His mind often wandered which soon ended Edisons three months of formal schooling. His mother had been a school teacher in Canada and happily took over the job of schooling her son. She encouraged and taught him to read and experiment. He recalled later, "My mother was the making of me.  Partially deaf since adolescence, he became a telegraph operator through a friends father. Edison's deafness aided him as it blocked out noises and prevented Edison from hearing the telegrapher sitting next to him.

One of his mentors during those early years was a fellow telegrapher and inventor named Franklin Leonard Pope, who allowed the then impoverished youth to live and work in the basement of his NJ home. Edison applied for his first patent, the electric vote recorder, on October 28, 1868.

Thomas Edison began his career as an inventor in Newark, NJ with the automatic repeater and other improved telegraphic devices, but the invention which first gained Edison fame was the phonograph in 1877. It was so unexpected by the public at large as to appear almost magical.

An example of different inventions among his 1,093 are the many types of printing telegraphs, galvanic batteries, stencil and perforating pens, phonographs, electricitiy, the light bulb, telephones, electric motors, preserving fruit, vacuum apparatus, electric and locomotive railways, apparatus for exhibiting moving figures, film for moving picture machines, automobiles, and the list goes on and on. At the time of his death he was working on an alternative supply of rubber for the making of tires for his  friend, Henry Ford.

Edison's major innovation was the Menlo Park research lab in New Jersey. It was the first institution set up with the specific purpose of producing constant technological innovation and improvement.

Charles Edison (1890-1969) Charles Edison, son of Thomas Edison, was a businessman, Assistant and then United States Secretary of the Navy, and served as the 42nd Governor of New Jersey.

Born at his parents' home, Glenmont, in West Orange, New Jersey, he attended the Hotchkiss School in Lakeville, Connecticut. In 1915-1916 he operated the one hundred seat "Little Thimble Theater" with Greenwich Village figure Guido Bruno. There they played the works of Shaw and Strindberg while Charles contributed verse to "Bruno's Weekly" under the pseudonym "Tom Sleeper". These avant-garde activities came to a halt when his father put him to work. He married his college sweetheart Carolyn Hawkins on March 27, 1918. They had no children. For a number of years Charles Edison ran Edison Records. Charles became president of his father's company Thomas A. Edison, Inc. in 1927, and ran it until it was sold in 1957, when it merged with the McGraw Electric Company to form the McGraw-Edison Electric Company. Edison was board chairman of the merged company until he retired in 1961.

On January 18, 1937, President Roosevelt appointed Charles Edison as Assistant Secretary of the Navy, then as Secretary on January 2, 1940, Claude A. Swanson having died several months previously. Edison himself only kept the job until June 24, resigning to run his gubernatorial campaign. During his time in the Navy department, he advocated construction of the large Iowa-class battleships, and that one of them be built at the Philadelphia Navy Yard, which secured votes for Roosevelt in Pennsylvania and New Jersey in the 1940 presidential election; in return, Roosevelt had BB-62 named the USS New Jersey.

In 1940, he won election as Governor of New Jersey, running in reaction to the political machine run by Frank Hague, but broke with family tradition by declaring himself a Democrat. As governor, he proposed updating the New Jersey State Constitution. Although it failed in a referendum and nothing was changed during his tenure, state legislators did reform the constitution later. In 1948, he established a charitable foundation, originally called "The Brook Foundation", now the Charles Edison Fund.

Between 1951 and 1969, he lived in the Waldorf-Astoria Hotel, where he struck up a friendship with Herbert Hoover, who also lived there. In 1962, Edison was one of the founders of the Conservative Party of New York State.

In 1967, Edison hosted a meeting at the Waldorf-Astoria in New York that led to the founding of the Charles Edison Youth Fund, later the Charles Edison Memorial Youth Fund. Attending the meeting were Rep. Walter Judd (R-Mn), author William F. Buckley, organizer David Jones, and Edison's political advisor Marvin Liebman. The name of the organization was changed in 1985 to The Fund for American Studies, in keeping with Edison's request to drop his name after 20 years of use.

His personal mascot was the owl, and he collected objects depicting owls. Charles Edison died on July 31, 1969 in New York City. He is buried in Rosedale Cemetery in Orange, New Jersey.