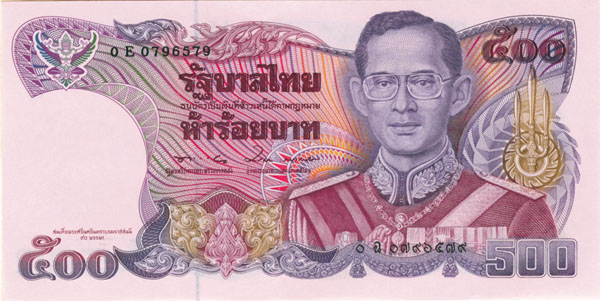 The baht (/bɑːt/; Thai: บาท, pronounced [bàːt]; sign: ฿; code: THB) is the official currency of Thailand. It is divided into 100 satang (สตางค์). The issuance of currency is the responsibility of the Bank of Thailand.

According to Bloomberg, the Thai baht was the world's best performing currency in 2018. The SWIFT, as of January 2019, ranked the Thai baht as the 10th most frequently used world payment currency.

The Thai baht, like the pound, originated from a traditional unit of mass. Its currency value was originally expressed as that of silver of corresponding weight (now defined as 15 grams), and was in use probably as early as the Sukhothai period in the form of bullet coins known in Thai as phot duang. These were pieces of solid silver cast to various weights corresponding to a traditional system of units related by simple fractions and multiples, one of which is the baht. These are listed in the following table:

That system was in use up until 1897, when the decimal system devised by Prince Jayanta Mongkol, in which one baht = 100 satang, was introduced by his half-brother King Chulalongkorn along with the demonetization of silver bullet coins on 28 October 1904 after the end of silver bullet coin production by the opening of Sitthikarn Royal Mint in 1857. However, coins denominated in the old units were issued until 1910, and the amount of 25 satang is still commonly referred to as a salueng, as is the 25-satang coin.

Until 27 November 1902, the baht was fixed on a purely silver basis, with 15 grams of silver to the baht. This caused the value of the currency to vary relative to currencies on a gold standard. In 1856 - 1864, the values of certain foreign silver coins were fixed by law, with the five baht = 3 Spanish dollar and five baht = seven Indian rupees along with the bulk rate of 100 Spanish dollar for 166 silver Baht. Before 1880 the exchange rate was fixed at eight baht per pound sterling, falling to 10 to the pound during the 1880s.

In 1902, the government began to increase the value of the baht by following all increases in the value of silver against gold but not reducing it when the silver price fell. Beginning at 21.75 baht = one pound sterling, the currency rose in value until, in 1908, a fixed peg to the British pound sterling was established of 13 baht = one pound. This was revised to 12 baht in 1919 and then, after a period of instability, to 11 baht in 1923. During World War II, the baht was fixed at a value of one Japanese yen on 22 April 1942 by setting the exchange rate of 1 Baht to 0.25974 grams of pure gold.

The baht was originally known to foreigners by the term tical, which was used in English language text on banknotes until the series 2 1925.