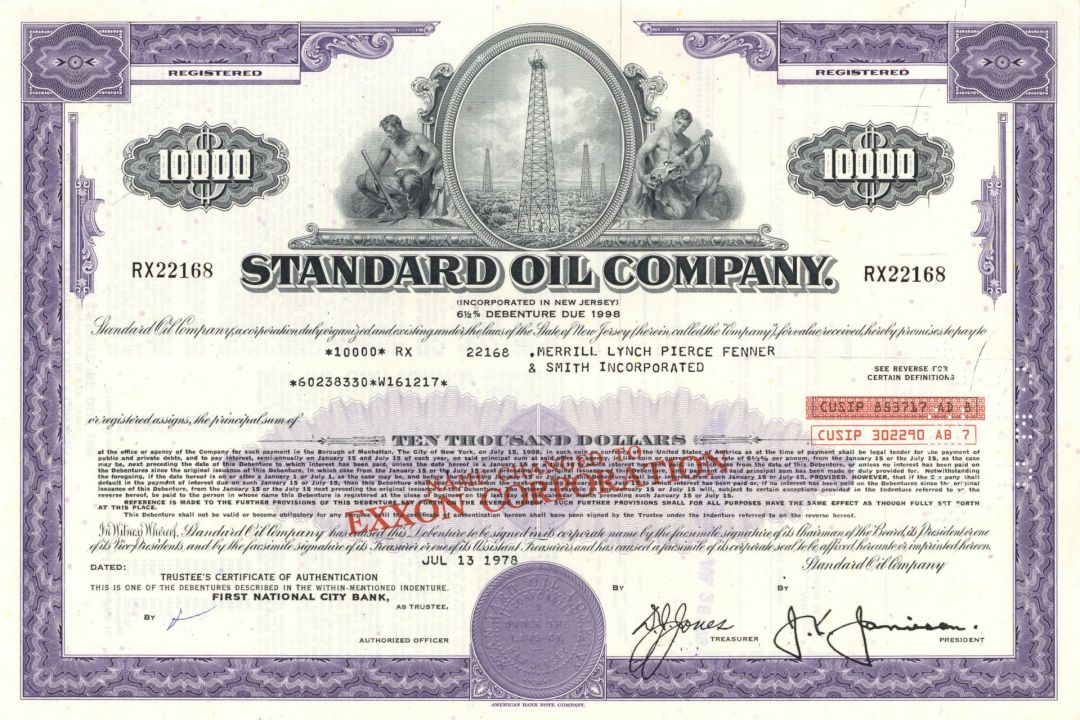 Over the next few decades, Jersey Standard grew significantly. John Duston Archbold was the first president of Jersey Standard. Archbold was followed by Walter C. Teagle in 1917, who made it the largest oil company in the world. In 1919, Jersey Standard acquired a 50% share in Humble Oil & Refining Co., a Texas oil producer. In 1920, it was listed on the New York Stock Exchange. In the following years it acquired or established Tropical Oil Company of Colombia (1920), Standard Oil Company of Venezuela (1921), and Creole Petroleum Company of Venezuela (1928).

In the Asia-Pacific region, Jersey Standard has established through its Dutch subsidiary an exploration and production company Nederlandsche Koloniale Petroleum Maatschappij in 1912. In 1922, it found oil in Indonesia and in 1927, it built a refinery in Sumatra. It had oil production and refineries but no marketing network.

Upon the merger of Socony and Vacuum Oil, some suggested that Jersey Standard and Standard Oil of California merge to maintain dominance in the oil industry, though no serious moves were ever made by either side.

In 1932, Jersey Standard acquired foreign assets of the Pan American Petroleum and Transport Company. In 1937, its assets in Bolivia were nationalized, followed by the nationalization of its assets in Mexico in 1938.

Since the 1911 Standard Oil Trust breakup, Jersey Standard used the trademark Esso, a phonetic pronunciation of the initials "S" and "O" in the name Standard Oil, as one of its primary brand names. However, several of the other Standard Oil spinoffs objected to the use of that name in their territories, and successfully got the U.S. federal courts in the 1930s to ban the Esso brand in those states. In those territories where the ban was in force, Jersey Standard instead marketed its products under the Enco or Humble names.

In 1947, Jersey Standard and Royal Dutch Shell formed the joint venture Nederlandse Aardolie Maatschappij BV for oil and gas exploration and production in the Netherlands. In 1948, Jersey Standard acquired interests in the Arab-American Oil Company (Aramco).

Humble Oil became a wholly-owned subsidiary of Jersey Standard and was reorganized into the United States marketing division of Jersey Standard in 1959. In 1967, Humble Oil purchased all remaining Signal stations from Standard Oil Company of California (today known as Chevron) In 1969, Humble Oil opened a refinery in Benicia, California, of which today is owned by Valero Energy.

In Libya, Jersey Standard made its first major oil discovery in 1959.

In 1955, when Fortune released its first Fortune 500 list, Jersey Standard both before and after it rebranded as Exxon was one of the top five companies on Fortune 500 between the first edition of the list and the year of its merger with Mobil and reaching the #1 spot on the list a few years between 1970 and 1995.

In 1965, Jersey Standard started to acquire coal assets through its affiliate Carter Oil (later renamed Exxon Coal, U.S.A.). For managing the Midwest and Eastern coal assets in the United States, the Monterey Coal Company was established in 1969. Carter Oil focused on the developing synthetic fuels from coal. In 1966, it started to develop the coal liquefaction process called the Exxon Donor Solvent Process. In April 1980, Exxon opened a 250-ton-per-day pilot plant in Baytown, Texas. The plant was closed and dismantled in 1982.

In late 1960s, Jersey Standard entered into the nuclear industry. In 1969, it created a subsidiary, Jersey Nuclear Company (later: Exxon Nuclear Company), for manufacturing and marketing of uranium fuel, which was to be fabricated from uranium concentrates mined by the mineral department of Humble Oil (later: Exxon Minerals Company). In 1970, Jersey Nuclear opened a nuclear fuel manufacturing facility, now owned by Framatome, in Richland, Washington. The company started surface mining of uranium ore in Converse County, Wyoming, in 1970, solution mining in 1972, and underground mining in 1977. Uranium ore processing started in 1972. The facility was closed in 1984.

Item ordered may not be exact piece shown. All original and authentic.
Email this to a friend
Request Info
Previous Item (Standard Oil Co. - Bond)    (State of Georgia - Bond) Next Item