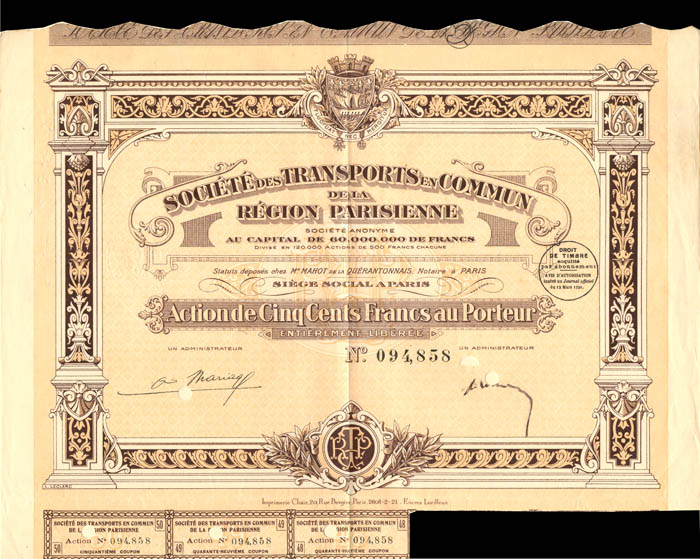 In relation to the RATP Group (French: Groupe RATP), best known as the RATP or Régie Autonome des Transports Parisiens (in English: Autonomous Parisian Transportation Administration), is a state-owned public transport operator and maintainer headquartered in Paris, France. Formed in 1949, it has its origins as the city's public transport operator. Its logo represents, in a stylised version, the Seine's meandering through the Paris area as the face of a person looking up.

Today, the RATP is still responsible for most of the public transport in the Greater Paris area, including the Paris Métro, Île-de-France tram and RATP Bus Network, as well as part of the regional express rail (RER) network. In the Île-de-France region, the RATP carries about 3.3 billion passengers per year.

While RATP's Paris-related activities are still a major part of its business, its operations have extended since 2002 to include business around the globe in various modes of urban and regional transportation. RATP Dev, the Group's international operations and maintenance subsidiairy, is present in 13 countries in Africa, Asia, Europe and North America.

In 2019, the Group's consolidated revenue was 5.704 billion euros; it employs 64,000 people. The company qualfies itself as the fourth largest actor in public transport.

Earlier, the CMP had absorbed the Société du Chemin de Fer Électrique Nord-Sud de Paris in 1930 and the Ligne de Sceaux in 1937, which extended commuter rail to the suburbs. The STCRP had been created on 1 January 1921 by the merger of about half a dozen independent bus and streetcar operators in the Paris area. By the time the STCRP was merged into the RATP, all of its streetcars had been replaced by bus routes.

In the early years of the 21st century, a partnership with the Transdev group resulted in RATP acquiring a minority shareholding in that group, with its many worldwide transport operations. However, in 2009, the Caisse des dépôts et consignations, the majority owner of the Transdev group, started negotiations with Veolia Environnement to merge Transdev with Veolia Transport. As part of the resulting agreement, made in May 2010, it was agreed that the RATP Group would take over ownership of some of Transdev's operations in lieu of cash payment for its holdings in Transdev. This had a considerable impact on RATP's international profile.

The current president and CEO of the RATP, Catherine Guillouard, was nominated on 2 August 2017. The previous RATP CEOs were Élisabeth Borne, Pierre Mongin and Anne-Marie Idrac.

In Paris, RATP operates, under its own name, on behalf of the Île-de-France Mobilités (IDFM), the Paris region transit authority. RATP's services constitute, in their own right, a multi-mode public transportation infrastructure, but also contribute to a larger multi-mode system extending out into the surrounding Île-de-France communities.

RATP Dev (Dev being a contraction of Développement, French for development), established in 2002 as a 100% subsidiary of the RATP Group, provides operations and maintenance of passenger transport services outside of the "historical" RATP network in the Greater Paris area although it also operates some specialised services within Paris. RATP Dev is present in 13 countries, namely Algeria, Egypt, China's special administrative region Hong Kong, France, Italy, Morocco, the Philippines, Qatar, Saudi Arabia, South Africa, Switzerland, the United Kingdom, and the United States. Wholly and partly owned operations include the following:

RATP Dev's presence in the United Kingdom is mainly concentrated in London with its portfolio of bus services on behalf of Transport for London. Through its three subsidiaries London United, Quality Line (acquired as Epsom Coaches in April 2012) and London Sovereign (acquired in April 2014), RATP Dev manages 1129 vehicles on 96 routes out of 10 garages, and has 3387 employees, as of 2020. Early 2021, RATP Dev announced that it is to close its Quality Line subsidiary and Epsom depot.

Outside of London, RATP Dev manages, since 2011, the Air Decker, a bus service connecting Bristol Airport with Bath.

RATP Dev manages touristic hop on hop off tour operations using double-decker buses: "Paris L'OpenTour" in Paris, The Original Tour in London (acquired in September 2014) and the Bath Bus Company in several cities in the United Kingdom (Bath, Cardiff, Eastbourne and Windsor. As of 2021 RATP Dev will add a hop on hop off circuit in Brussels, Belgium, to its network (as part of an eight-year concession granted by STIB, 12 electric vehicles).

Since 2013, RATP Dev, in a consortium with TPG and Pomagalski, manages the Salève cable car, in the French Alps. Ridership of the cable car has increased by 50% since 2013, notably after the introduction of shuttle buses from Annemasse and Saint-Julien-en-Genevois. The contract of the RATP Dev-led consortium has been renewed in 2019 for 12 additional years, until 2031.

RATP Dev established in 2018 a "regional office" in Singapore for Asia-Pacific albeit not having any operational activity in the city-state. In December 2020, RATP Dev and SBS Transit announced a partnership for future rail projects in Singapore, without referencing specific commercial targets.

In September 2020 RATP Dev announces a partnership with Getlink to jointly bid under the "Régionéo" brand name for regional rail services in France which will gradually opened to competitive tendering.