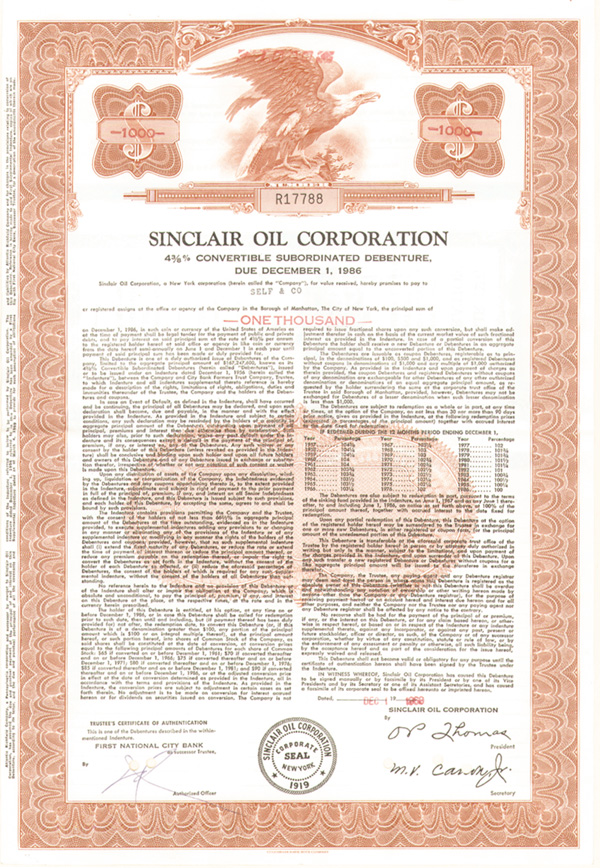 Sinclair Oil Corporation is an American petroleum corporation, founded by Harry F. Sinclair on May 1, 1916, as the Sinclair Oil and Refining Corporation by combining the assets of 11 small petroleum companies. Originally a New York corporation, Sinclair Oil reincorporated in Wyoming in 1976. The corporation's logo features the silhouette of a large green dinosaur, based on the then-common idea that oil deposits beneath the earth came from the dead bodies of dinosaurs. It is ranked on the list of largest privately owned American corporations. It owns and operates refineries, gas stations, hotels, a ski resort, and a cattle ranch.

Sinclair has long been a fixture on American roads with its dinosaur logo and mascot, a Brontosaurus.

Near the beginning of the Great Depression, Sinclair sold the remaining interest in its pipeline subsidiary to Standard Oil Company (Indiana) for US$72.5 million (Standard Oil had purchased a 50% interest in the pipeline subsidiary in 1921). With these funds, including an additional US$33.5 million from an additional common stock issue, Sinclair retired several promissory notes and prepared to weather the Depression with the remaining supply of cash.

Between 1921 and 1922, Sinclair leased oil production rights to Teapot Dome in Wyoming without competitive bidding. This led to the Teapot Dome scandal.

At that time, Sinclair Oil seemed to offer a viable alternative to the Italian fascist government, which was officially aiming to boost competition; in fact, most of the Italian oil market was controlled by the Italo-American Petroleum Society (SIAP), which in turn was fully dominated by Standard Oil. As the Teapot Dome scandal unfolded in the United States and reached the international press, Mussolini accelerated the negotiations, with a deal signed on 4 May 1924 (although without an official meeting, to avoid public outcry). In this regard, Sinclair Oil Company is known for having made "large payments to leading Fascistsall acting as intermediaries for Benito Mussoliniin return for an exclusive monopoly to drill for oil on Italian soil and in the Italian colonies". The deal was reported in a press release by the Head of Government (Mussolini) issued on the night of May 15, 1924 and published by most newspapers on the following day: the press release assured the public that Sinclair Oil had been awarded its contract on competitive basis and had provided guarantees it had no relations with the international oil trust. This case of corruption was discovered by the whistleblower and anti-fascist politician Giacomo Matteotti, who was later kidnapped and killed by Mussolini's newborn secret police, just before he could report his discoveries to the Parliament. In his posthumous article, published in the July issue of English Life (a magazine founded by Brendan Bracken), Matteotti accused Sinclair Oil of being a Pawn of Standard Oil, as well as revealing "grave irregularities concerning the concession." Matteotti's theses were echoed in the notes of Epifanio Pennetta, who contributed to the preliminary investigation on the murder: "To all appearances," companies like Nafta and Saper "were in competition with the Sinclair company, while in fact they were in cahoots with Sinclair" and added that Sinclair Oil was actually working "in concert" with Standard Oil.

During the Great Depression, Sinclair saved many other petroleum companies from receivership or bankruptcy and acquired others to expand its operations. In 1932, Sinclair purchased the assets of Prairie Oil and Gas' pipeline and producing companies in the southern United States, and the Rio Grande Oil Company in California. The purchase of Prairie also gave Sinclair a 65% interest in Producers and Refiners Corporation (or Parco), which Sinclair subsequently acquired when Parco entered receivership in 1934. Lastly, in 1936, Sinclair purchased the East Coast marketing subsidiary of Richfield Oil Company, which had operated in receivership for several years. Richfield then reorganized, resulting in the creation of the Richfield Oil Corporation. Sinclair was instrumental in transferring capital and managerial assets into Richfield. Thirty years later, Richfield merged with Atlantic Refining, located on the East Coast, forming Atlantic Richfield.

At the Chicago World's Fair of 19331934, Sinclair sponsored a dinosaur exhibit meant to play on the link between the formation of petroleum deposits and the time of dinosaurs, now a largely discredited misconception. The exhibit included a two-ton animated model of a brontosaurus. The exhibit proved so popular it inspired a promotional line of rubber brontosaurs at Sinclair stations, complete with wiggling heads and tails, and the eventual inclusion of the brontosaur logo. Later, inflatable dinosaurs were given as promotional items, and an anthropomorphic version appeared as a service-station attendant in advertisements. Some locations have a life-size model of the mascot straddling the building's entrance.

At the New York World's Fair of 19641965, Sinclair again sponsored a dinosaur exhibit, "Dinoland", featuring life-size replicas of nine different dinosaurs, including their signature brontosaurus. Souvenirs from the exhibit included a brochure ("Sinclair and the Exciting World of Dinosaurs") and molded plastic figurines of the dinosaurs featured. After the Fair closed, Dinoland remained as a traveling exhibit.

Two of the replicas (Tyrannosaurus and Brontosaurus) are still on display at Dinosaur Valley State Park near Glen Rose, Texas. Another, a model of a Trachodon, has been displayed at Brookfield Zoo outside Chicago, Illinois. A replica of a Triceratops is either owned by the Kentucky Science Center and was being stored outdoors at an industrial park in South Louisville, Kentucky in 2016 or was donated by Sinclair to the Smithsonian Institution and is on display as "Uncle Beazley" in the National Zoological Park in Washington, D.C.

In 1969, Sinclair was acquired by the Atlantic Richfield Company (ARCO). Federal antitrust provisions required the new entity to divest itself of certain Sinclair assets, and as a result, the East Coast operations of Sinclair were sold to BP (which has since purchased ARCO). After the acquisition by ARCO, the dinosaur was phased out, but at least one service station, in Winona, Minnesota, retained the original look through the 1980s. Many Sinclair stations in the Midwest continued to use the dinosaur logo, along with ARCO's "diamond spark" logo. At least some Sinclair stations partially retained the Sinclair brand for a time, using ARCO's blue rectangular logo, including the "spark" graphic, but with the word "Sinclair" substituted for ARCO.

In 1976, ARCO spun off Sinclair by selling certain assets to Robert (Earl) Holding. Sinclair has been owned by the Holdings since 1976. Assets divested in the spin-off included ARCO's retail operations in the region bounded by the Mississippi River and the Rocky Mountains, and the rights to the Sinclair brand and logo, resulting in many stations along Interstate 80 keeping the dinosaur logo. The ARCO stations in Texas, New Mexico, Illinois and some portions of Oklahoma were not affected by the divestiture, and they continued as part of ARCO until ARCO pulled out of those states in the 1980s.

Currently headquartered in Salt Lake City, Sinclair is the 75th-largest private company in the United States. There are 2,607 Sinclair filling stations in 20 states in the Western and Midwestern United States. As of 2010, the corporation operates two refineriesone in Casper, Wyoming, and one in Sinclair, Wyoming. Sinclair operated a third refinery in Tulsa, Oklahoma, until it was sold to Holly Corporation on December 1, 2009. Sinclair's other operations include 1,000 miles of pipeline.

In the mid-2010s, Sinclair fuel stations began actively spreading across southern California, including Los Angeles, San Diego, and Fresno with holders offering attractive deals for potential clients to make the switch from a private brand to the Sinclair name brand.

Sinclair continues to use the green dinosaur, affectionately called "Dino" and markets all its products under the logo. Sinclair patented the gasoline additive SG-2000. The high-octane fuel blend is called "Dino Supreme" and regular gas is "Dino", trade names used since 1961 when many oil companies still used trade names for their fuels instead of generic terms such as "regular," "premium," or "unleaded". Before that time, Sinclair's trade names for its gasoline products included "Power X" for high-octane fuel and "Sinclair H-C" for regular gas. Sinclair also has marketed products such as Dino, Dino Supreme, and Opaline motor oils.

The Brontosaurus logo is parodied in the Toy Story and Cars franchise films as being the "Dinoco" gas station chain, perhaps an allusion to gasoline and its origin as a fossil fuel, as well as a portmanteau between the "dinosaur" in Sinclair's logo and the suffixes of the "Amoco", "Conoco", and "Sunoco" franchises.

The TV series Dinosaurs featured several characters with names derived from fossil fuel companies. The main character and his family had the surname Sinclair.

Sinclair once had a service station in Montgomery, Alabama in the Cloverdale neighborhood that closed in the 1970s, which was remodeled in 1992 into a restaurant named Sinclair's in honor of the former neighborhood station. The ownership group also opened 2 other locations, one at Lake Martin and one eastside. The lake & Cloverdale locations were closed by 2018 while the eastside location has flourished for nearly 30 years as of 2021.