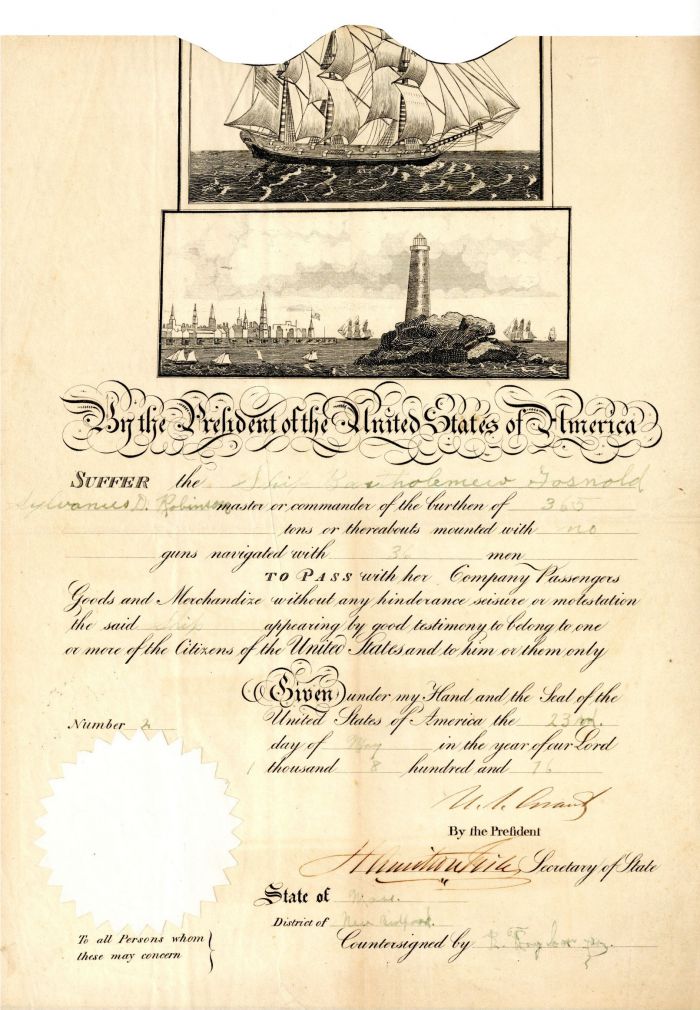 Shipping Pass signed by U.S. Grant as president and Hamilton Fish as Secretary of State. Rare!

Ulysses S. Grant (born Hiram Ulysses Grant; /ˈhaɪrəm juːˈlɪsiːz/ HY-rəm yoo-LIS-eez; April 27, 1822  July 23, 1885) was an American politician and military leader who served as the 18th president of the United States from 1869 to 1877. As president, Grant was an effective civil rights executive who created the Justice Department and worked with the Radical Republicans to protect African Americans during Reconstruction. As Commanding General, he led the Union Army to victory in the American Civil War in 1865 and thereafter briefly served as Secretary of War.

Raised in Ohio, Grant possessed an exceptional ability with horses, which served him well through his military career. He was admitted to West Point, graduated 21st in the class of 1843 and served with distinction in the MexicanAmerican War. In 1848, he married Julia Dent, and together they had four children. Grant abruptly resigned his army commission in 1854 and returned to his family, but lived in poverty for seven years. He joined the Union Army after the Civil Warbroke out in 1861 and rose to prominence after winning several early Union victories on the Western Theater. In 1863 he led the Vicksburg campaign, which gained control of the Mississippi River. President Abraham Lincoln promoted him to lieutenant general after his victory at Chattanooga. For thirteen months, Grant fought Robert E. Lee during the high-casualty Overland Campaign and at Petersburg. On April 9, 1865, Lee surrendered to Grant at Appomattox. A week later, Lincoln was assassinated and was succeeded by President Andrew Johnson, who promoted Grant to General of the Army in 1866. Later Grant openly broke with Johnson over Reconstruction policies; Grant used the Reconstruction Acts, which had been passed over Johnson's veto, to enforce civil rights for recently freed African Americans.

A war hero, drawn in by his sense of duty, Grant was unanimously nominated by the Republican Party and was elected president in 1868. As president, Grant stabilized the post-war national economy, supported ratification of the 15th Amendment, and crushed the Ku Klux Klan. He appointed African Americans and Jewish Americans to prominent federal offices. In 1871, Grant created the first Civil Service Commission, advancing civil service more than any prior president. The Liberal Republicans and Democrats united behind Grant's opponent in the presidential election of 1872, but Grant was handily re-elected. Grant's Native American policy was to assimilate Indians into the White culture; the Great Sioux War was fought during his term. Grant's foreign policy was mostly peaceful, without war, the Alabama Claims against Great Britain skillfully resolved, but his prized Caribbean Dominican Republic annexation was rejected by the Senate.

The Grant administration is traditionally known for prevalent scandals, but modern scholarship has better appreciated Grant's appointed reformers and prosecutions. Grant appointed John Brooks Henderson and David Dyer, who prosecuted the Whiskey Ring. Grant appointed Benjamin Bristow and Edwards Pierrepont, who served as Grant's anti-corruption team. Grant appointed Zachariah Chandler, who cleaned up corruption in the Interior. Grant prosecuted Mormon polygamists (1871), pornographers, and abortionists (18731877). The Panic of 1873 plunged the nation into a severe economic depression that allowed the Democrats to win the House majority. In the intensely disputed presidential election of 1876, Grant facilitated the approval by Congress of a peaceful compromise.

In his retirement, Grant was the first president to circumnavigate the world on his tour, dining with Queen Victoria and meeting many prominent foreign leaders. In 1880, Grant was unsuccessful in obtaining the Republican presidential nomination for a third term. In the final year of his life, facing severe financial reversals and dying of throat cancer, he wrote his memoirs, which proved to be a major critical and financial success. At the time of his death, he was memorialized as a symbol of national unity. Grant was a modern general and "a skillful leader who had a natural grasp of tactics and strategy". Historical assessments of Grant's presidency have ranked him low, 38th in 1994 and 1996, but Grant moved up to 21st in 2018 and 24th in 2021. Although critical of scandals and Grant's loyal defense of culprits, modern historians have emphasized his two-term presidential accomplishments. These included the prosecution of the Klan, treatment of blacks as both human and American, an innovative Native American policy, and the peaceful settlements of the Alabama Claims and controversial 1876 presidential election.

Hamilton Fish (August 3, 1808  September 7, 1893) was an American politician who served as the 16th Governor of New York from 1849 to 1850, a United States Senator from New York from 1851 to 1857 and the 26th United States Secretary of State from 1869 to 1877. Fish is recognized as the "pillar" of the presidency of Ulysses S. Grant and considered one of the best U.S. Secretaries of State by scholars, known for his judiciousness and efforts towards reform and diplomatic moderation. Fish settled the controversial Alabama Claims with Great Britain through his development of the concept of international arbitration.

Fish and Grant kept the United States out of war with Spain over Cuban independence by coolly handling the volatile Virginius Incident. In 1875, Fish initiated the process that would ultimately lead to Hawaiian statehood, by having negotiated a reciprocal trade treaty for the island nation's sugar production. He also organized a peace conference and treaty in Washington D.C. between South American countries and Spain. Fish worked with James Milton Turner, America's first African American consul, to settle the Liberian-Grebo war. President Grant said he trusted Fish the most for political advice.

Fish came from both prominence and wealth, his family being of Dutch Americans heritage long-established in New York City. He attended Columbia College, and later passed the bar. Initially working as New York's commissioner of deeds, he ran unsuccessfully for New York State Assembly as a Whig candidate in 1834. After marrying, he returned to politics and was elected to the U.S. House of Representatives in 1843. Fish ran for New York's Lieutenant Governor in 1846, falling to a Democratic Anti-Rent Party contender. When the office was vacated in 1847, Fish ran and was elected to the position. In 1848 he ran and was elected Governor of New York, serving one term. In 1851, he was elected U.S. Senator for the state of New York, serving one term. Fish gained valuable experience serving on the U.S. Senate Committee on Foreign Relations. During the 1850s he became a Republican after the Whig party dissolved. In terms of the slavery issue, Fish was a moderate, having disapproved of the KansasNebraska Act and the expansion of slavery.

After traveling to Europe, Fish returned to America and supported Abraham Lincoln as the Republican candidate for president in 1860. During the American Civil War, Fish raised money for the Union war effort and served on Lincoln's presidential commission that made successful arrangements for Union and Confederatetroop prisoner exchanges. Fish returned to his law practice after the Civil War, and was thought to have retired from political life. When Ulysses S. Grant was elected president in 1868, he appointed Fish as U.S. Secretary of State in 1869. Fish took on the State Department with vigor, reorganized the office, and established civil service reform. During his 8-year tenure, Fish had to contend with Cuban belligerency, the settlement of the Alabama claims, CanadaUS border disputes, and the Virginius incident. Fish implemented the new concept of international arbitration, where disputes between countries were settled by negotiations, rather than military conflicts. Fish was involved in a political feud between Senator Charles Sumner and President Grant in the latter's unsuccessful efforts to annex the Dominican Republic. Fish organized a naval expedition in an unsuccessful attempt to open trade with Korea in 1871. Leaving office and politics in 1877, Fish returned to private life and continued to serve on various historical associations. Fish died quietly of old age in his luxurious New York State home in 1893.

Historically, Fish has been praised for his calm demeanor under pressure, honesty, loyalty, modesty, and for his talented statesmanship during his tenure under President Grant, briefly serving under President Hayes. The hallmark of his career was the Treaty of Washington, peacefully settling the Alabama Claims. Fish also ably handled the Virginus incident, keeping the United States out of war with Spain. Fish's lesser known, but successful South American détente and armistice, has been forgotten by historians. Fish, while Secretary of State, lacked empathy for the plight of African Americans, and opposed annexation of Latin race countries. Fish has been traditionally viewed to be one of America's top ranked Secretaries of State by historians. Fish's male descendants would later serve in the U.S. House of Representatives for three generations.