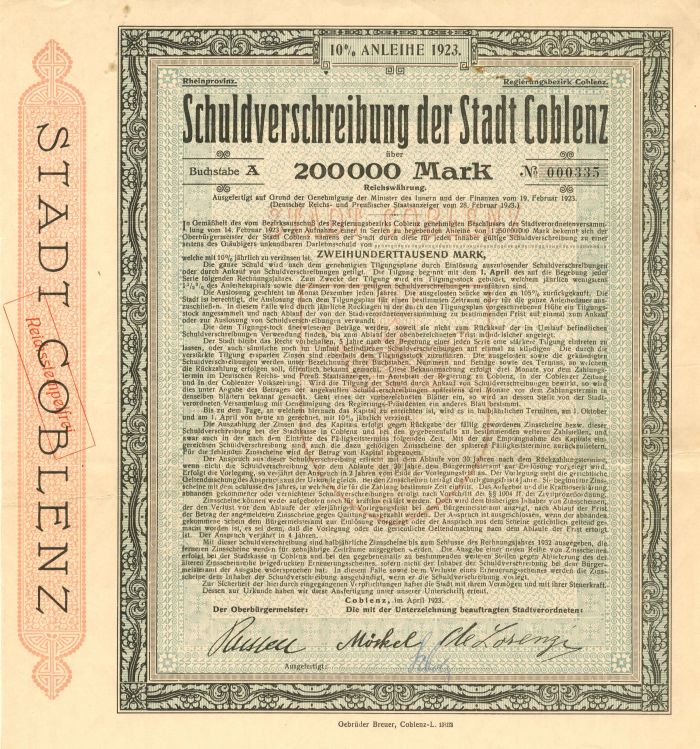 Koblenz, spelled Coblenz before 1926, is a German city on the banks of the Rhine and of the Moselle, a multi-nation tributary.

Koblenz was established as a Roman military post by Drusus around 8 B.C. Its name originates from the Latin (ad) cōnfluentēs, meaning "(at the) confluence". The actual confluence is today known as the "German Corner", a symbol of the unification of Germany that features an equestrian statue of Emperor William I. The city celebrated its 2000th anniversary in 1992.

It ranks in population behind Mainz and Ludwigshafen am Rhein to be the third-largest city in Rhineland-Palatinate. Its usual-residents' population is 112,000 (as at 2015). Koblenz lies in a narrow flood plain between high hill ranges, some reaching mountainous height, and is served by an express rail and autobahn network. It is part of the populous Rhineland.

Around 1000 BC, early fortifications were erected on the Festung Ehrenbreitstein hill on the opposite side of the Moselle. In 55 BC, Roman troops commanded by Julius Caesar reached the Rhine and built a bridge between Koblenz and Andernach. About 9 BC, the "Castellum apud Confluentes", was one of the military posts established by Drusus.

Remains of a large bridge built in 49 AD by the Romans are still visible. The Romans built two castles as protection for the bridge, one in 9 AD and another in the 2nd century, the latter being destroyed by the Franks in 259. North of Koblenz was a temple of Mercury and Rosmerta (a Gallo-Roman deity), which remained in use up to the 5th century.

With the fall of the Western Roman Empire, the city was conquered by the Franks and became a royal seat. After the division of Charlemagne's empire, it was included in the lands of his son Louis the Pious (814). In 837, it was assigned to Charles the Bald, and a few years later it was here that Carolingian heirs discussed what was to become the Treaty of Verdun (843), by which the city became part of Lotharingia under Lothair I. In 860 and 922, Koblenz was the scene of ecclesiastical synods. At the first synod, held in the Liebfrauenkirche, the reconciliation of Louis the German with his half-brother Charles the Bald took place. The city was sacked and destroyed by the Norsemen in 882. In the second, slavery was condemned, specifically it was decreed that any man that 'led away a Christian man and then sold him' should be considered guilty of homicide. In 925, it became part of the eastern German Kingdom, later the Holy Roman Empire.

In 1018, the city was given by the emperor Henry II to the archbishop-elector of Trier after receiving a charter. It remained in the possession of his successors until the end of the 18th century, having been their main residence since the 17th century. Emperor Conrad II was elected here in 1138. In 1198, the battle between Philip of Swabia and Otto IV took place nearby. In 1216, prince-bishop Theoderich von Wied donated part of the lands of the basilica and the hospital to the Teutonic Knights, which later became the Deutsches Eck.

In 12491254, Koblenz was given new walls by Archbishop Arnold II of Isenburg; and it was partly to overawe the turbulent citizens that successive archbishops built and strengthened the fortress of Ehrenbreitstein that still dominates the city.

When the French Revolution broke out, Koblenz became a popular hub of royalist emigres and escaping feudal lords who had fled France. It was sometime in mid-1791, after June but before October, that supporters of loyalty in Koblenz (as well as Worms and Brussels) were preparing an invasion of France that was to be supported by foreign armies, with conspirators regularly travel between Koblenz and Tuileries Palace, accepting encouragement and money from King Louis XVI, while secret committees were collecting arms and enrolling men and officers. Among the notable emigres living at Koblenz can be counted Charles X, ex-minister Charles Alexandre de Calonne, and Louis XVIII. Officers and men were recruited through the Gazette de Paris (sixty livres for each recruit), and the enrolled men were then sent to Metz and afterwards to Koblenz, and in a visit by Claude Allier to Koblenz in January, 1792, he stated that 60,000 men were armed and ready to take action.

On July 26, 1792, the Duke of Brunswick, who commanded one of the invading armies, composed of 70,000 Prussians and 68,000 Austrians, Hessians and émigrés, began to march upon Koblenz. He published a manifesto in which he threatened to set fire to the towns that dared to defend themselves, and to exterminate their inhabitants as rebels, including Koblenz. The city's fate was at hand. But, just as in World War 1, the torrential rains and difficult conditions of the Argonne forest halted the invaders, the roads "were liquid mud," and supplies began to run out due to weather impacting supply lines. The radical revolutionary Georges Danton negotiated with the Duke of Brunswick, under unknown conditions, for his retreat, which was carried out through Grand-Pré and Verdun, then across the Rhine, and the city of Koblenz was saved.

In 1793, the uprising of Catholic peasants at the Vendee aimed at the overthrow of the National Assembly, which began only after emissaries from Koblenz travelled there and brought with them papal bulls, royal decrees and gold. In escaping the watchful eye of French revolutionary forces, these emissaries were aided and protected by the middle classes, the ex-slave-traders of Nantes, and the anti-sans-culottes, pro-England merchants.

Due to their experience in the French Revolution, Peter Kropotkin had termed the phrase Koblenzian to describe the type of royalist emigres that lived in Koblenz.

The city was a member of the league of the Rhenish cities which rose in the 13th century. The Teutonic Knights founded the Bailiwick of Koblenz in or around 1231. Koblenz attained great prosperity and it continued to advance until the disaster of the Thirty Years' War brought about a rapid decline. After Philip Christopher, elector of Trier, surrendered Ehrenbreitstein to the French, the city received an imperial garrison in 1632. However, this force was soon expelled by the Swedes, who in their turn handed the city over again to the French. Imperial forces finally succeeded in retaking it by storm in 1636.

In 1688, Koblenz was besieged by the French under Marshal de Boufflers, but they only succeeded in bombing the Old City (Altstadt) into ruins, destroying among other buildings the Old Merchants' Hall (Kaufhaus), which was restored in its present form in 1725. The city was the residence of the archbishop-electors of Trier from 1690 to 1801.

In 1786, the last archbishop-elector of Trier, Clemens Wenceslaus of Saxony, greatly assisted the extension and improvement of the city, turning the Ehrenbreitstein into a magnificent baroque palace. After the fall of the Bastille in 1789, the city became, through the invitation of the archbishop-elector's chief minister, Ferdinand Freiherr von Duminique, one of the principal rendezvous points for French émigrés. The archbishop-elector approved of this because he was the uncle of the persecuted king of France, Louis XVI. Among the many royalist French refugees who flooded into the city were Louis XVI's two younger brothers, the Comte de Provence and the Comte d'Artois. In addition, Louis XVI's cousin, Prince Louis Joseph de Bourbon, prince de Condé, arrived and formed an army of young aristocrats willing to fight the French Revolution and restore the Ancien Régime. The Army of Condé joined with an allied army of Prussian and Austrian soldiers led by Duke Karl Wilhelm Ferdinand of Brunswick in an unsuccessful invasion of France in 1792. This drew down the wrath of the First French Republic on the archbishop-elector; in 1794, Coblenz was taken by the French Revolutionary army under Marceau (who was killed during the siege), and, after the signing of the Treaty of Lunéville (1801) it was made the capital of the new French départment of Rhin-et-Moselle. In 1814, it was occupied by the Russians. The Congress of Vienna assigned the city to Prussia, and in 1822, it was made the seat of government for the Prussian Rhine Province.

After World War I, France occupied the area once again. The city was the center of the American occupation force from 1919 - 1923. In defiance of the French, the German populace of the city insisted on using the more German spelling of Koblenz after 1926. During World War II it hosted the command of German Army Group B and, like many counterparts, was heavily bombed and rebuilt afterwards. From 16  19 March 1945, it was the scene of heavy fighting by the U.S. 87th Infantry Division in support of Operation Lumberjack. Between 1947 and 1950, it served as the seat of government of Rhineland-Palatinate.

The Rhine Gorge was declared a World Heritage Site in 2002, with Koblenz marking the northern end.

Item ordered may not be exact piece shown. All original and authentic.
OUT OF STOCK
Request re-stock notice?
Email this to a friend
Request Info
Previous Item (State of Bremen (Uncanceled))    (Konigreich Westphalen (Kingdom of Westphalia) - "Napoleon") Next Item