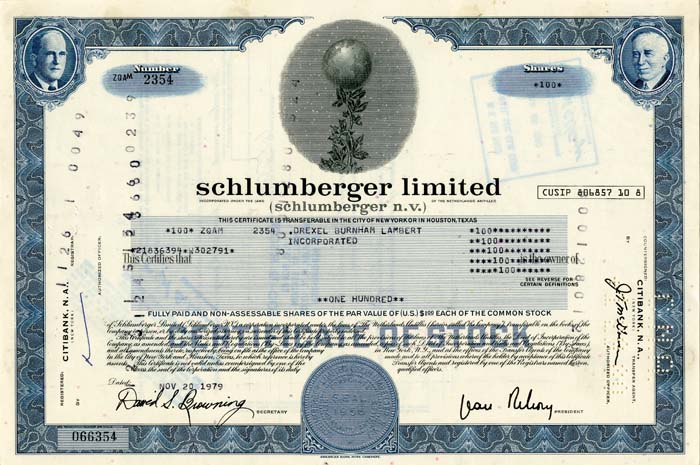 Schlumberger was founded in 1926 by two brothers Conrad and Marcel Schlumberger from the Alsace region in France as the Electric Prospecting Company (French: Société de prospection électrique). The company recorded the first-ever electrical resistivity well log in Merkwiller-Pechelbronn, France in 1927. Today, Schlumberger supplies the petroleum industry with services such as seismic data processing, formation evaluation, well testing and directional drilling, well cementing and stimulation, artificial lift, well completions, flow assurance and consulting, and software and information management. The company is also involved in the groundwater extraction and carbon capture and storage industries.

The Schlumberger brothers had experience conducting geophysical surveys in countries such as Romania, Canada, Serbia, South Africa, the Democratic Republic of the Congo and the United States. The new company sold electrical-measurement mapping services, and recorded the first-ever electrical resistivity well log in Merkwiller-Pechelbronn, France in 1927. The company quickly expanded, logging its first well in the U.S. in 1929, in Kern County, California. In 1935, the Schlumberger Well Surveying Corporation was founded in Houston, later evolving into Schlumberger Well Services, and finally Schlumberger Wireline and Testing. Schlumberger invested heavily in research, inaugurating the Schlumberger-Doll Research Center in Ridgefield, Connecticut in 1948, contributing to the development of a number of new logging tools. In 1956, Schlumberger Limited was incorporated as a holding company for all Schlumberger businesses, which by now included American testing and production company Johnston Testers.

Over the years, Schlumberger continued to expand its operations and acquisitions. In 1960, Dowell Schlumberger (50% Schlumberger, 50% Dow Chemical), which specialized in pumping services for the oil industry, was formed. In 1962, Schlumberger Limited became listed on the New York Stock Exchange. That same year, Schlumberger purchased Daystrom, an electronic instruments manufacturer in South Boston, Virginia which was making furniture by the time the division was sold to Sperry & Hutchinson in 1971. Schlumberger purchased 50% of Forex in 1964 and merged it with 50% of Languedocienne to create the Neptune Drilling Company. The first computerized reservoir analysis, SARABAND, was introduced in 1970. The remaining 50% of Forex was acquired the following year; Neptune was renamed Forex Neptune Drilling Company. In 1979, Fairchild Camera and Instrument (including Fairchild Semiconductor) became a subsidiary of Schlumberger Limited.

In 1981, Schlumberger established the first international data links with e-mail. In 1983, Schlumberger opened its Cambridge Research Center in Cambridge, England.

In 1984, the SEDCO drilling rig company and half of Dowell of North America were acquired, resulting in the creation of the Anadrill drilling segment, a combination of Dowell and The Analysts' drilling segments. Forex Neptune was merged with SEDCO to create the Sedco Forex Drilling Company the following year, when Schlumberger purchased Merlin and 50% of GECO.

In 1991, Schlumberger acquired PRAKLA-SEISMOS, and pioneered the use of geosteering to plan the drill path in horizontal wells.

In 1992, Schlumberger acquired software company GeoQuest Systems. With the purchase came the conversion of SINet to TCP/IP and thus internet capable. In the 1990s Schlumberger bought out the petroleum division, AEG meter, and ECLIPSE reservoir study team Intera Technologies Corp. A joint venture between Schlumberger and Cable & Wireless resulted with the creation of Omnes, which then handled all of Schlumberger's internal IT business. Oilphase and Camco International were also purchased.

In 1999, Schlumberger and Smith International created a joint venture, M-I L.L.C., the world's largest drilling fluids (mud) company. The company consists of 60% Smith International, and 40% Schlumberger. Since the joint venture was prohibited by a 1994 antitrust consent decree barring Smith from selling or combining their fluids business with certain other companies, including Schlumberger, the U.S. District Court in Washington, D.C. found Smith International Inc. and Schlumberger Ltd. guilty of criminal contempt and fined each company $750,000 and placed each company on five years probation. Both companies also agreed to pay a total of $13.1 million, representing a full disgorgement of all of the joint venture's profits during the time the companies were in contempt.

In 2000, the Geco-Prakla division was merged with Western Geophysical to create the seismic data acquisition and processing contracting company WesternGeco, of which Schlumberger held a 70% stake, the remaining 30% belonging to competitor Baker Hughes. Sedco Forex was spun off, and merged with Transocean Drilling company in 2000.

In 2001, Schlumberger acquired the IT consultancy company Sema plc for $5.2 billion. The company was an Athens 2004 Summer Olympics partner, but Schlumberger's venture into IT consultancy did not pay off, and divestiture of Sema to Atos Origin was completed that year for $1.5 billion. The cards division was divested through an IPO to form Axalto, which later merged with Gemplus to form Gemalto, and the Messaging Solutions unit was spun off and merged with Taral Networks to form Airwide Solutions. In 2003, the Automated Test Equipment group, part of the 1979 Fairchild Semiconductor acquisition, was spun off to NPTest Holding, which later sold it to Credence.

In 2004, Schlumberger Business Consulting was launched and a decade later was acquired by Accenture.

In 2005, Schlumberger purchased Waterloo Hydrogeologic, which was followed by several other groundwater industry related companies, such as Westbay Instruments, and Van Essen Instruments. Also that year, Schlumberger relocated its U.S. corporate offices from New York to Houston.

In 2006, Schlumberger purchased the remaining 30% of WesternGeco from Baker Hughes for US$2.4 billion. Also that year, the Schlumberger-Doll Research Center was relocated to a newly built research facility in Cambridge, Massachusetts to replace the Ridgefield, Connecticut research center. The facility joins the other research centers operated by the company in Cambridge, England; Moscow, Russia; Stavanger, Norway; and Dhahran, Saudi Arabia.

In 2010, the acquisition of Smith International in an all-stock deal valued at $11.3 billion was announced. The sale price is 45.84-a-share price was 37.5 percent higher than Smith closing price on 18 February 2010. The deal is the biggest acquisition in Schlumberger history. The merger was completed on August 27, 2010. Also announced in 2010 were Schlumberger plans to acquire Geoservices, a French-based company specializing in energy services, in a deal valued at $1.1 billion, including debt.

In 2014, Schlumberger announced the purchase of the remaining shares of SES Holdings Limited (Saxon), a Calgary-based provider of international land drilling services, from First Reserve and certain members of Saxon management. The transaction is subject to customary closing conditions, including the receipt of regulatory approvals. Schlumberger had a minority share in Saxon previously.

In 2015, Schlumberger was indicted by the US Department of Justice for sanction violations of conducting business in Iran and Sudan; the company was fined $233 million, amounting to the largest fine for sanctions to date.

In 2015, due to a downturn in the global oil and gas industry, Schlumberger announced 21,000 layoffs accounting for 15% of the company's total workforce.

In 2018, Schlumberger announced that WesternGeco would be exiting the seismic data acquisition business, both onshore and offshore, while retaining its multiclient data processing and interpretation segments. This decision followed the bankruptcy filings of several competitors in the seismic services sector.

The company has offices in the La Défense business district of Puteaux and in Paris.

Schlumberger maintains a 33-acre (13 ha) campus at the northeast corner of U.S. Highway 90A and Gillingham Lane in Sugar Land, Texas; as of 2017 Schlumberger is the third largest employer in the city. In 2015 Schlumberger announced that it was moving its U.S. corporate headquarters to the Sugar Land facility from its Houston office building. The company plans to build new buildings with a scheduled completion time of late 2017. They include a total of 250,000 square feet (23,000 m2) of Class A office space and an "amenities" building with 100,000 square feet (9,300 m2) of space.

In the 1930s, the North American headquarters were established in Houston. In the 1970s, the company's top executives in North America were relocated to New York City. By 2006, the head office had 50 executives and support staff. By that year the company was moving that office to a building near the Houston Galleria.

Schlumberger moved its Houston-area offices from 5000 Gulf Freeway in Houston to the Sugar Land campus in 1995.

In 2009, Newsweek released their "Green Rankings" a ranking of the 500 largest corporations on track records on a number of environmental issues. Schlumberger was ranked 118th out of 500 overall, and 3rd out of 31 in their industry. Newsweek remarked that to mitigate global warming Schlumberger has invested in carbon sequestration which involves long-term storage of CO2 and that the company's seismic survey ships are 20% to 25% more fuel-efficient than those of other seismic contractors from using fuels that emit less pollution and towing equipment that creates less drag on the vessels.

In 2006, a radioactive canister imported by Schlumberger was recovered in the Western Australian outback desert. The canister had been lost by the company's transport partner, when the improperly secured container fell off the trailer on which it was being transported.

In 2010, the Aberdeen Sheriff court fined Schlumberger Oilfield UK £300,000 for losing a radioactive source on the rig floor on the Ensco 101 mobile drilling rig in the North Sea for 4 hours.

In 2009, the Pennsylvania Department of Environmental Protection fined Chesapeake Appalachia LLC and Schlumberger Technology Corp. more than $15,500 each for a hydrochloric acid spill in February 2009 at Chesapeake's Chancellor natural gas well site in Asylum Township, Bradford County, Pennsylvania. Officials said the leak did not contaminate groundwater.

In 2006, as the current owner of a facility in Pickens, South Carolina, Schlumberger agreed to pay $11.8 million to federal and state agencies for a problem caused by the previous owner, Sangamo-Weston, a capacitor manufacturing plant. The cause of the problem was from polychlorinated biphenyls (PCB) released into the environment by Sangamo-Weston from 1955 to 1987. According to the Justice Department's Environment and Natural Resources Division, an additional agreement by Schlumberger to purchase and remove dams will directly improve the Twelvemile Creek, South Carolina ecosystem and provide significant environmental benefits for the affected communities.

In 2010, Schlumberger was contracted to perform wireline logging on the Deepwater Horizon oil rig in the Gulf of Mexico. On the day of the explosion, the Schlumberger crew was supposed to perform a cement evaluation test, but the test was cancelled and the crew was released by BP to leave the rig on the same day. The cost-cutting decision to cancel the test is dramatized in the subsequent film by Peter Berg.

In 2015, Schlumberger pled guilty to violating U.S. sanctions related to Iran and Sudan and agreed to pay a $237M penalty.

In 2020, a class action lawsuit was filed against Schlumberger, alleging a culture of sexual harassment, discrimination, and retaliation. According to the company's pay-gap report for 2018, women composed a mere 5.4% of field roles and 16.2% of roles in the full company. The lawsuit alleges that males regularly documented female co-workers and flaunted them on public forums. Male colleagues would also encourage other men to break into the plaintiff's room at night and stonewall her if she did not consent to sexual activity. The lawsuit also outlines instances of "sexist and hostile comments," and one instance in which the plaintiff was groped. Women who complain to HR are told it's all just "oil field talk" and are subsequently ignored. When the plaintiff kept complaining, Schlumberger allegedly terminated the plaintiff. Women who spoke with the Texas Observer describe a culture of silence, where women stay silent for fear of being fired in the high turnover company.