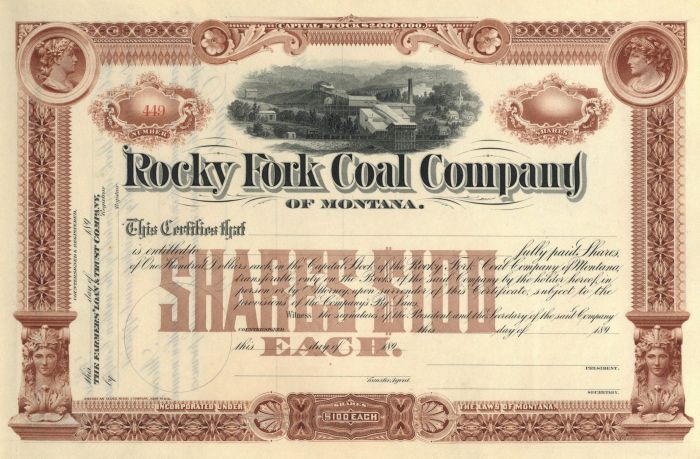 Red Lodge got its start in 1884 as a mere stagecoach stop nestled near the foot of the Beartooth Mountains, and began to bloom once coal was discovered.

The Rocky Fork Coal Company was developed by businessmen from Bozeman to extract the valuable coal from Red Lodge's circuit of mines. To make commerce even more efficient, the Northern Pacific Railroad extended its tracks to serve the booming coal industry in Red Lodge. Hundreds of immigrants miners were being brought in by train to work in Red Lodge. Finn, Scottish, Irish, Slavic, English, and Italian miners all came to earn a living. There were also many Native Americans living in Red Lodge at the time. By 1892 the population had reached 1,180. Red Lodge had rapidly become a town of strong-willed and sporty people. For the next two decades, the coal industry of Red Lodge continued to flourish.

By 1910, Carbon County became the leading coal producer in all of Montana, and by 1911, Red Lodge had grown to a population of 5,000. However, the financial success of Red Lodge was not felt by all its citizens. Racial prejudice and greed created terrible working conditions for the immigrant workers. Company officials were known to be openly hostile toward foreigners and gave special treatment to anyone who was born in America or who spoke English. To combat the powerful coal companies and their wealthy officials, the miners created unions. Several strikes shut down mine production until the miners were rewarded with increased wages, shorter working days, and safer mines.

However, the coal industry began to go downhill as a result of the extended strikes in 1919 and 1922. The railroads discovered they could get coal more cheaply elsewhere, and one by one the coal mines in Red Lodge were shut down. When the depression hit, many of the different ethnic groups were forced out of isolation. As everyone shared the same hardships and stood in the same bread lines, they began to learn about each other's different cultures. Soon, ethnic groups that were once rivals, began celebrating each other's festivals and holidays. Today, Red Lodge continues to celebrate its racial diversity with its annual Festival of Nations. With the fall of the coal empire, Red Lodge desperately needed a new industry. For a while, Red Lodge was a leading producer of moonshine liquor during prohibition. But it wasn't until the 1930s when J.C.F. Siegfriedt had the dream to build a highway over the Beartooth Mountains that connected Red Lodge to Cooke City.

With help from the passage of the Park Approach Act, which allocated funds for the building of roads leading to National Parks, the Beartooth Highway was approved and opened its gates in 1936. Today, Red Lodge has a flourishing tourist industry. As a gateway to Yellowstone National Park, and as an entrance to the Beartooth Highway, thousands of tourists visit Red Lodge each year. Despite the fact that the town hosts a lot of visitors, many hip artists have made their home in Red Lodge. Once in Red Lodge, you gain a sense of its coal mining history with its many turn-of-the-century homes and buildings. Much of downtown Red Lodge is listed on the National Register of Historic Places for its Classical Revival, Romanesque, Gothic, Colonial Revival, and Bungalow/Craftsman architecture.

Red Lodge is a city in and the county seat of Carbon County, Montana, United States. It is part of the Billings Metropolitan Statistical Area. The population was 2,257 at the United States Census, 2020.

On September 17, 1851, the United States government signed a treaty with the Crow Nation, ceding the area which now contains Red Lodge, MT to the Crow Indians. Rich coal deposits were found there in 1866, and gold was discovered nearby in 1870. An 1880 treaty between the U.S. government and the Crow allowed the area to be settled starting April 11, 1882.

The Red Lodge post office was established on Dec 9, 1884 with Postmaster Ezra L. Benton. A rail line was constructed into town, and coal shipments began in June 1889. The boundaries of the Crow Reservation were redrawn October 15, 1892, opening the whole area to settlement. From then until the 1930s, coal mining defined the town.

In the late 19th century, many new settlers came to Red Lodge, MT. The majority came from Italy, the British Isles, Finland, Norway, Sweden, Germany, and Austria-Hungary. By the mid-1880s, migrants were still outnumbered by large numbers of Native Americans. By 1892 the population reached 1,180.

Red Lodge suffered in the Great Depression, which forced many mines to close. To offset this downturn, the manufacture of illegal bootleg liquor, labeled syrup, became an economic mainstay and was sold as far away as Chicago and San Francisco.

In 1931 work began on the Beartooth Highway linking Red Lodge to Yellowstone National Park; it was officially opened in 1936.

The downtown has been redeveloped since the mid-1980s for historic and cultural tourism, as the Red Lodge Commercial Historic District. The buildings in downtown Red Lodge fell into disrepair in large part because population had dropped from its 1915 peak of 6,000 people to about 2,000.

As of 2006, an estimate suggests that the population of Red Lodge may increase from about 1,200 people in the winter to over 1,800 people during the summer tourist season, arriving via the Beartooth Highway.