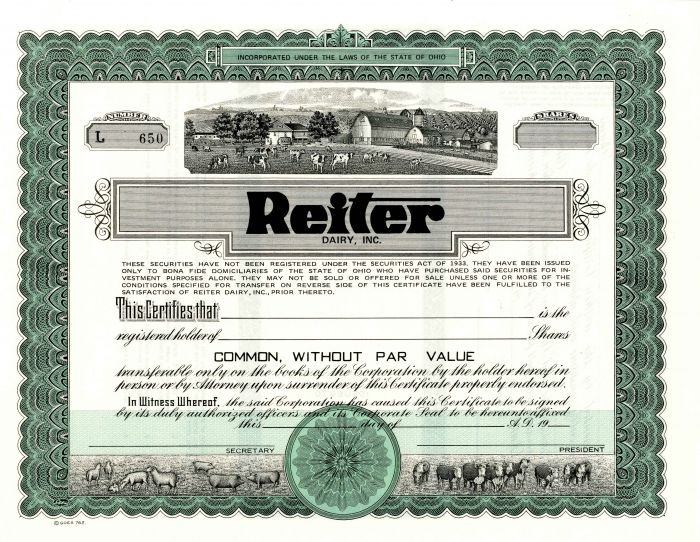 Dean Foods is an American food and beverage company and the largest dairy company in the United States. Headquartered in Dallas, Texas, the company maintains plants and distributors in the United States. Dean Foods has 66 manufacturing facilities in 32 U.S. states and distributes its products across all 50. Its 24 brands include DairyPure, TruMoo, Friendly's, Mayfield, Dean's, Meadow Gold, Tuscan, T.G.Lee and Alta Dena. In November 2019, the company filed for Chapter 11 bankruptcy citing the decline in consumption of cow's milk.

On May 1, 2020, Dean Foods was acquired by the Dairy Farmers of America.

Dean Foods was founded by Samuel E. Dean Sr., who owned an evaporated milk processing facility in Franklin Park, Illinois, in the 1920s. After purchasing other Illinois dairy plants Dean developed the enterprise "from a small regional dairy into a diversified food company".

In December 2001, the legacy brand of Dean Foods was acquired by the Dallas-based Suiza Foods Corporation, who later adopted the Dean Foods name. As part of the merger, 11 plants were divested under the name National Dairy to a group led by Dairy Farmers of America. In 2005, Dean Specialty Foods was spun off from Dean Foods as Bay Valley Foods, LLC, a division of TreeHouse Foods, Inc. In June 2005, TreeHouse Foods started trading on the New York Stock Exchange with a ticker of THS.

In March 2005, the Cornucopia Institute filed a complaint with the United States Department of Agriculture (USDA) alleging that their Horizon Organic subsidiary was violating "organic livestock management" standards.

In August 2006, Dean Foods acquired Jilbert's Dairy, a 70-year-old family business near Marquette, Michigan. Dean Food's TofuTown brand was acquired by the Hain Celestial Group in June 2007. In December, Dean Foods bought the Wells Dairy milk plant in Le Mars, Iowa. Dean Foods purchased Alpro in 2009 for an estimated US$455 million, making it a "global leader in soy beverages". This resulted in a restructuring of the company that included selling off a number of subsidiaries, including Rachel's Organic.

On May 12, 2008, the Cornucopia Institute filed a second complaint with the USDA again alleging that Deans Foods had violated federal organic regulations requiring access to pasture and fresh grass for their dairy cows.

Silk brand soy milk was made using organic soybeans until early 2009, when Dean Foods switched to conventional soybeans while maintaining the same UPC barcodes and prices on the Silk products and replacing the word organic with natural on the product's packaging, prompting the Cornucopia Institute to file complaints that the company had not properly notified retailers or consumers.

Foremost Farms USA, a cooperative of over 2,000 dairy farmers in several mid-western states, sold its Wisconsin milk processing plants to Dean Foods in 2009. In January 2010, the US Department of Justice and the state attorneys general's office of Wisconsin and Michigan, filed a lawsuit objecting to the purchase and alleged that it created a monopolizing provider. Dean Foods announced it was contesting the complaint.

In 2011, a class action suit was brought against Deans Foods over health claims made on the packaging of Horizon Organic Milk. In 2012, Dean Foods contributed $253,950 to fund opposition to California's ballot Proposition 37 which would require mandatory labeling of foods containing genetically modified ingredients.

Dean Foods spun off WhiteWave Foods, the maker of Horizon Organic and Silk Soymilk, as a standalone company in May 2013.

In May 2015 Dean Foods announced that they would introduce a national milk brand, DairyPure, which would appear alongside regional brands, in an attempt to boost sales.

In 2017, bettor and stock trader Billy Walters was convicted of insider trading in Dean shares in Federal court. Walters' source of non-public information was company director Thomas C. Davis employing a prepaid cell phone nicknamed "the Batphone" and, sometimes, the code words "Dallas Cowboys" for the company name. The case involved profits or avoided losses of $40 million from 2008 to 2014. The verdict was to be appealed according to Walters' lawyer.

Southern Foods Group, LLC d/b/a Dean Foods, and forty-two (42) affiliated companies filed for Chapter 11 bankruptcy in the United States District Court for the Southern District of Texas on November 12, 2019. The company cited their debt and pension obligations as the reason for their bankruptcy filing; they also suggested that they were working with potential buyers for the company's assets. A cited reason for the bankruptcy was changing demand for milk and milk-related products., a potential sale to the cooperative Dairy Farmers of America was mentioned.

Dean Foods products include milk, ice cream, dairy products, cheese, juice, and teas. It processes milk in the United States under a number of regional and national brands.