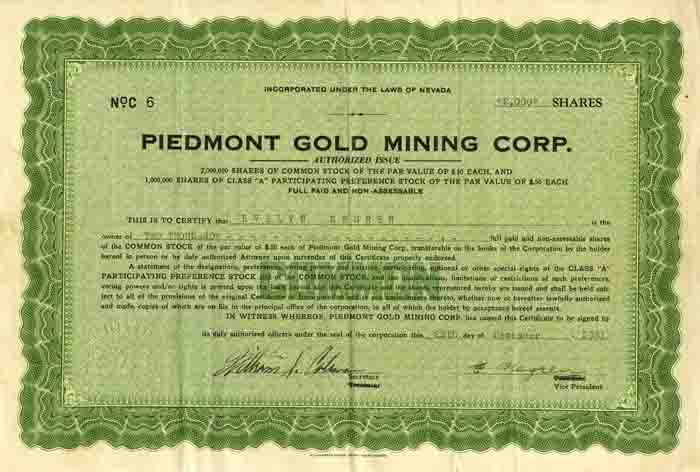 The Nevada mining industry supported an average 14,787 direct employees in 2018, with about 75,000 additional jobs related to providing goods and services needed by the mining industry. The average pay for mining industry employees during this time was $97,600 per year, the third highest average private employment sector in the state.

Major mining companies such as Newmont Goldcorp and Barrick Gold Corporation operate many of the state's gold mines. Active mines include those at Jerritt Canyon and the Carlin Trend.

Gold was discovered in the vicinity of Carlin in Eureka County in the 1870s, but production was small. Placer deposits were discovered in 1907, but the deposits were too small to cause much excitement. It was not until 1961 that Newmont Mining Corporation discovered the large low-grade gold deposit at Carlin that the mining industry began to take notice. The Carlin mine began producing gold in 1965, but at a gold price of US$35 per troy ounce, ore grades were still too low to cause a rush to northern Nevada. It was not until the gold price escalated in the 1970s that mining companies began to target similar deposits.

The Carlin Trend, part of what is also known as the Carlin Unconformity, is 5 miles (8 km) wide and 40 miles (60 km) long running northwestsoutheast, has since produced more gold than any other mining district in the United States. Production from the trend surpassed 50,000,000 troy ounces (1,600 t) of gold in 2002. The Carlin and other mines along the trend pioneered the method of open-pit mining with cyanide heap leach recovery that is today used at large low-grade gold mines worldwide.

New ore deposits are still being discovered and developed along the trend. The South Arturo deposit was discovered by Barrick Gold in 2005. The deposit contains an estimated 1,300,000 troy ounces (40 t) of gold.

Goldfield was discovered in 1902, and began major gold production in 1904. The ore occurs in altered shear zones in Tertiary dacite and andesite. Total gold production through 1959 was 4,200,000 troy ounces (130 t).

All mineral and gold production on public and private lands in Nevada is subject to a Net Royalty payable to the State. The gross proceeds from the sale of minerals minus allowable deductions determine the taxable net proceeds. If the net proceeds from sales by a mine in the taxable year total $4 million or more, the tax rate is 5%. For less profitable mines the tax rate is graduated down to 2%. Miners' net proceeds are also subject to federal corporate income tax of 21%.

Item ordered may not be exact piece shown. All original and authentic.
OUT OF STOCK
Request re-stock notice?
Email this to a friend
Request Info
Previous Item (New England Mining and Quarrying Co.)    (Crescent Mining Co. - Stock Certificate) Next Item