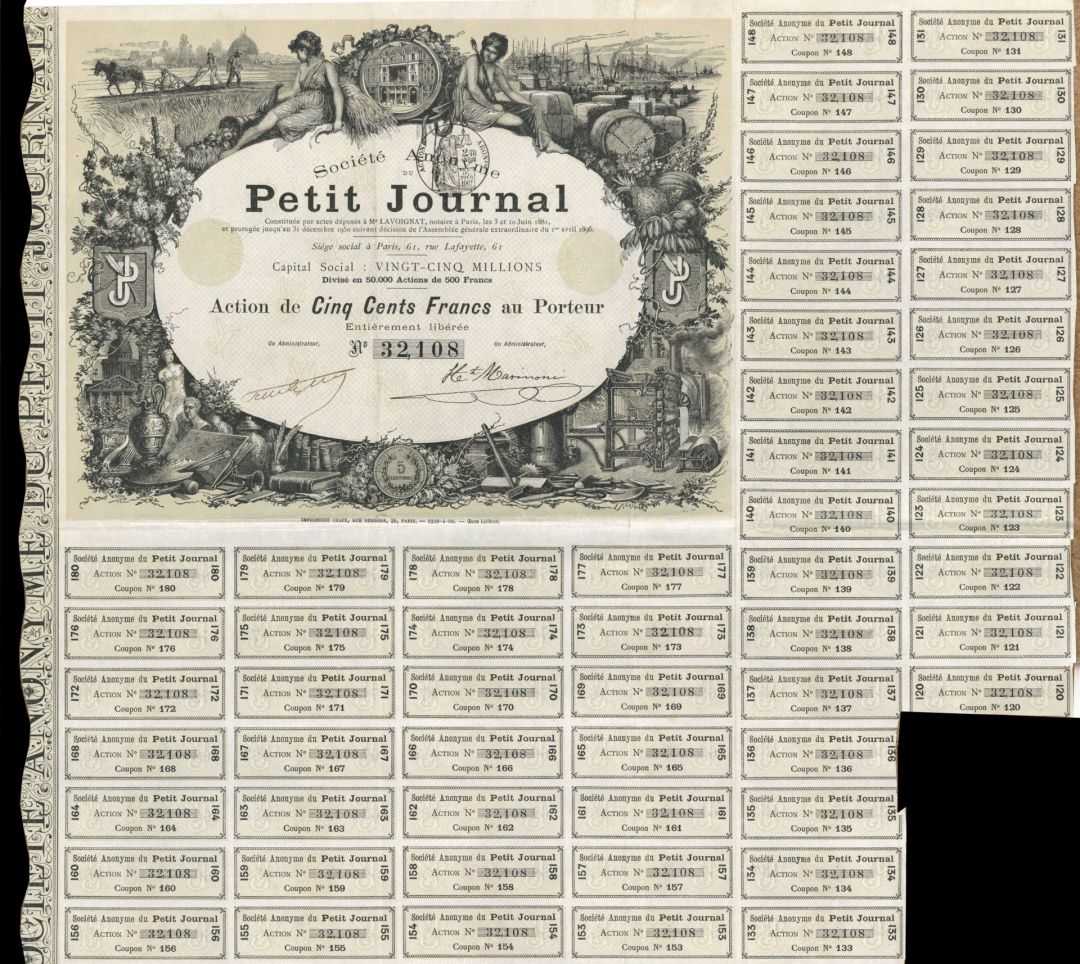 Le Petit Journal was a conservative daily Parisian newspaper founded by Moïse Polydore Millaud; published from 1863 to 1944. Together with Le Petit Parisien, Le Matin, and Le Journal, it was one of the four major French dailies. In 1890, during the Boulangiste crisis, its circulation first reached one million copies. Five years later, it had a circulation of two million copies, making it the world's largest newspaper.

The first issue of the Journal appeared on February 1, 1863 with a printing of 83,000 copies. Its founder, Millaud, was originally from Bordeaux and had begun as a publisher of financial and legal newsletters. For a few years, he was the owner of La Presse, an early penny paper. The first printing ran to 83,000 copies; a large printing compared to the other serious newspapers. For example, Le Siècle typically had a press run of 50,000 copies.

Within two years the Journal was printing 259,000 copies, making it the largest daily in Paris. By 1870, it had reached 340,000 copies; twice the figure for the other major dailies put together. Much of this progress was made possible by the rotary presses that had been designed by Hippolyte Auguste Marinoni in 1866 and installed at the Journal in 1872.

Despite its apparent successes, the Millaud family found themselves in financial difficulties and, in 1873, sold their interests in the company to a group headed by Émile de Girardin. In 1882, Marinoni took control of the Journal, succeeding Girardin. In 1884, he introduced the Supplément illustré, a weekly Sunday supplement that was the first to feature color illustrations. This became so popular that, in 1889, Marinoni developed a color rotary press that could print 20,000 sheets per hour. By 1895, one million copies of the supplement were being produced every week and the Journal had a press run of two million copies, 80% of which went to the provinces, making it France's predominant newspaper.

By 1900, the paper's growth was slowing considerably. Many of its readers had gone over to Le Petit Parisien because that paper had avoided taking sides in the Dreyfus Affair, whereas Ernest Judet [fr], the Journal's editor, was staunchly Anti-Dreyfus. Soon after, Le Petit Parisien became France's best-selling newspaper. By 1914, the Journal's printing run had decreased to 850,000. By 1919, it had fallen to 400,000.

In 1936, the Journal became the official organ of the French Social Party, with the motto, "Travail, Famille, Patrie", which was borrowed from the "Croix-de-Feu" league and later became the motto of the Vichy régime. Despite receiving support from many notable figures, including the press magnate Raymond Patenôtre, its decline continued and, by 1937, the typical press run was only 150,000.

During the Second World War, its headquarters was moved to Clermont-Ferrand in 1940. It received a monthly grant from the government, and François de La Rocque became chairman of its board of directors, but the paper could not be saved, and the final issue was published in August 1944.

Part of the Journal's attraction was its low price. Because in the beginning it officially (if not actually) did not cover politics, it avoided paying the 10 centimes newspaper tax, and therefore could be sold for only 5 centimes, as opposed to 15 centimes for the typical daily. It came in a convenient format of 43×30 cm (17×12 ins.), did not require a subscription and, in addition to the news, offered feature stories, serials (including the popular detective stories of Émile Gaboriau), horoscopes and opinion pieces. Also, it was distributed in the evening, so it could be hawked to workers leaving their shops and factories.

One of the Journal's major innovations, that made a substantial contribution to its popularity, was the publishing of detailed minutes from sensational trials, beginning with the Troppmann Affair in 1869. The exploitation of this affair enabled the Journal to almost double its readership. It was also one of the earliest instances of a publication's journalistic ethics being called to serious account.