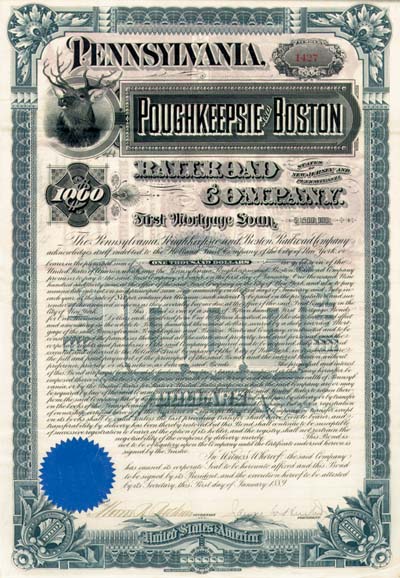 The Pennsylvania, Slatington and New England Railroad was sold at foreclosure to William W. Gibbs, president of the Poughkeepsie Bridge Company, on July 12, 1887, and was reorganized as the Pennsylvania, Poughkeepsie and Boston Railroad (also known as the "Pickles, Pork, and Beans" Line). Construction was begun, but the company again went bankrupt, and was sold at foreclosure December 14, 1894.

Around that time, various other companies were chartered to build the line over the Poughkeepsie Bridge, and in 1889, the Central New England and Western Railroad was completed. That part would be combined with the PS&NE in 1892 by the Philadelphia and Reading Railway, but in 1893 the two parts were split. The eastern section later became part of the New York, New Haven and Hartford Railroad, and the western section stayed independent to the end.

The Campbell Hall Connecting Railroad was chartered April 3, 1889 to obtain the right to operate the section in New York. It was originally planned to extend beyond Pine Island to Campbell Hall, the west end of the existing Poughkeepsie Bridge line.

The Philadelphia and Reading Railway gained control of the Central New England and Western Railroad in early 1892, and the PP&B soon after, giving it a route from Reading via the Schuylkill and Lehigh Railroad to Slatington, and then to New England along its new acquisitions. The Reading's bankruptcy in 1893 ended this control, and led to the PP&B's bankruptcy.