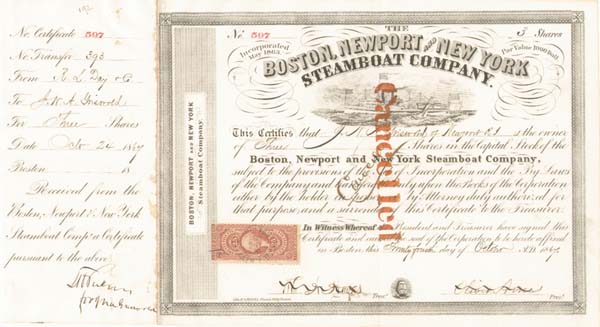 Oliver Ames (1831-1895), Capitalist, Philanthropist. Son of Oakes Ames. Became dominant figure in Oliver Ames and Sons on the death of his uncle (Oliver Ames, 1807-77). A fortunate and far-seeing financier, he was director of many banks, railroads and land companies. Served ably as Republican Governor of Massachusetts, 1886-90. This 1860's Steamboat company stock is signed by Oliver Ames as President. The signature is neatly pen cancelled but clear. Stock is stamp cancelled and the stub is attached at left. Excellent Condition.
Condition: Excellent