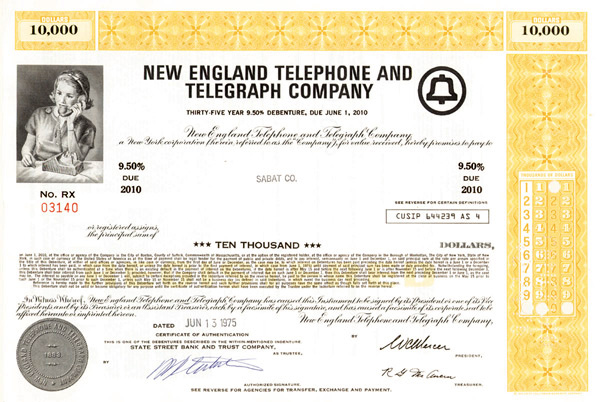 The New England Telephone and Telegraph Company was a very early company set up to develop the then-new telephone.

New England Telephone and Telegraph lasted only a year as a separate entity, from 1878 to 1879, and had no direct relationship with the later company of the same name, which after the breakup of the Bell System in 1984 became part of the NYNEX Corporation, now part of Verizon.

The New England Telephone and Telegraph Company was formed February 12, 1878, by investors in the states of Massachusetts and Rhode Island at the behest of an agent of Gardiner Greene Hubbard, the father-in-law of telephone inventor Alexander Graham Bell.

The American Bell Telephone Company was later purchased by its own subsidiary, American Telephone & Telegraph (AT&T) on December 30, 1899. Thus share ownership of New England Telephone and Telegraph evolved into ownership of AT&T. AT&T would later undergo mergers with SBC Communications and BellSouth to become The New AT&T.