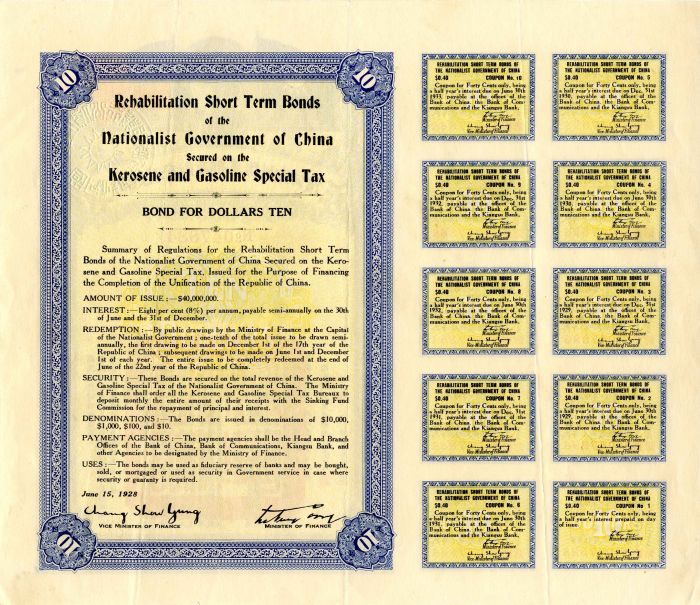 Bond for Dollars Ten, 8% on the Kerosene and Gasoline Special Tax.

After the outbreak of the Xinhai Revolution on 10 October 1911, revolutionary leader Sun Yat-sen was elected Provisional President and founded the Provisional Government of the Republic of China. To preserve national unity, Sun ceded the presidency to military strongman Yuan Shikai, who established the Beiyang government. After a failed attempt to install himself as Emperor of China, Yuan died in 1916, leaving a power vacuum which resulted in China being divided into several warlord fiefdoms and rival governments. They were nominally reunified in 1928 by the Nanjing-based government led by Generalissimo Chiang Kai-shek, which after the Northern Expedition governed the country as a one-party state under the Kuomintang, and was subsequently given international recognition as the legitimate representative of China. The Nationalist government would then experience many challenges such as the Second Sino-Japanese War, the Chinese Civil War and World War II. The government was in place until it was replaced by the current Government of the Republic of China in the newly promulgated Constitution of the Republic of China of 1948.

The oldest surviving republic in East Asia, the Republic of China was formally established on 1 January 1912 in mainland China following the Xinhai Revolution, which itself began with the Wuchang Uprising on 10 October 1911, replacing the Qing dynasty and ending nearly three thousand years of imperial rule in China. Central authority waxed and waned in response to warlordism (191528), Japanese invasion (193745), and the Chinese Civil War (192749), with central authority strongest during the Nanjing Decade (192737), when most of China came under the control of the Kuomintang (KMT) under an authoritarian one-party state.

At the end of World War II in 1945, the Empire of Japan surrendered control of Taiwan and its island groups to the Allies, and Taiwan was placed under the Republic of China's administrative control. The legitimacy of this transfer is disputed and is another aspect of the disputed political status of Taiwan.

After Sun's death on 12 March 1925, four months later on 1 July 1925, the National Government of the Republic of China was established in Guangzhou.

The following year, Chiang Kai-shek became the de facto leader of the Kuomintang (KMT), or Chinese Nationalist Party. Chiang led the Northern Expedition through China with the intention of defeating the warlords and unifying the country. Chiang received the help of the Soviet Union and the Chinese Communist Party; however, he soon dismissed his Soviet advisors. He was convinced, not without reason, that they wanted to get rid of the KMT and take over.

Chiang decided to strike first and purged the Communists, killing thousands of them. At the same time, other violent conflicts took place in the south of China where the Communist Party fielded superior numbers and were massacring Nationalist supporters. These events eventually led to the Chinese Civil War between the Nationalist Party and the Communist Party. Chiang Kai-shek pushed the Communist Party into the interior as he sought to destroy them, and moved the Nationalist Government to Nanjing in 1927. Leftists within the KMT still allied to the communists, led by Wang Jingwei, had established a rival Nationalist Government in Wuhan two months earlier, but soon joined Chiang in Nanjing in August 1927. By the following year, Chiang's army had captured Beijing after overthrowing the Beiyang government and unified the entire nation, at least nominally, marking the beginning the Nanjing Decade.

According to Sun Yat-sen's "Three Stages of Revolution" theory, the KMT was to rebuild China in three phases: the first stage was military unification, which was carried out with the Northern Expedition; the second was "political tutelage" which was a provisional government led by the KMT to educate people about their political and civil rights, and the third stage was the constitutional government. By 1928, the Nationalists, having taken over power militarily and reunified China, started the second phase, promulgating a provisional constitution and beginning the period of so-called "tutelage". The KMT was criticized for instituting authoritarianism, but claimed it was attempting to establish a modern democratic society.

Among other institutions, they created at that time the Academia Sinica, the Central Bank of China, and other agencies. In 1932, China sent a team for the first time to the Olympic Games. Historians, such as Edmund Fung, argue that establishing a democracy in China at that time was not possible. The nation was at war and divided between Communists and Nationalists. Corruption within the government and lack of direction also prevented any significant reform from taking place. Chiang realized the lack of real work being done within his administration and told the State Council: "Our organization becomes worse and worse ... many staff members just sit at their desks and gaze into space, others read newspapers and still others sleep." The Nationalist government wrote a draft constitution on 5 May 1936. Mass killing under the nationalists were common with millions of people killed. Notable mass killings include deaths from forced army conscription and the White Terror.

The Nationalists faced a new challenge with the Japanese invasion of Manchuria in 1931, with hostilities continuing through the Second Sino-Japanese War, part of World War II, from 1937 to 1945. The government of the Republic of China retreated from Nanjing to Chongqing. In 1945, after the war of eight years, Japan surrendered and the Republic of China, under the name "China", became one of the founding members of the United Nations. The government returned to Nanjing in 1946.

After the defeat of Japan during World War II, Taiwan was surrendered to the Allies, with ROC troops accepting the surrender of the Japanese garrison. The government of the ROC proclaimed the "retrocession" of Taiwan to the Republic of China and established a provincial government on the island. The military administration of the ROC extended over Taiwan, which led to widespread unrest and increasing tensions between local Taiwanese and mainlanders. The shooting of a civilian on 28 February 1947 triggered an island-wide unrest, which was brutally suppressed with military force in what is now known as the February 28 Incident. Mainstream estimates of casualties range from 18,000 to 30,000, mainly Taiwanese elites. The 28 February Incident has had far-reaching effects on subsequent Taiwanese history.

From 1945 to 1947, under United States mediation, especially through the Marshall Mission, the Nationalists and Communists agreed to start a series of peace talks aiming at establishing a coalition government. The two parties agreed to open multiparty talks on post-World War II political reforms via a Political Consultative Conference. This was included in the Double Tenth Agreement. This agreement was implemented by the Nationalist Government, who organized the first Political Consultative Assembly from 10 to 31 January 1946. Representatives of the Kuomintang, Communist Party of China, Chinese Youth Party, and China Democratic League, as well as independent delegates, attended the conference in Chongqing. However, shortly afterward, the two parties failed to reach an agreement and the civil war resumed. In the context of political and military animosity, the National Assembly was summoned by the Nationalists without the participation of the Communists and promulgated the Constitution of the Republic of China. The constitution was criticized by the Communists, and led to the final break between the two sides. The full-scale civil war resumed from early 1947.