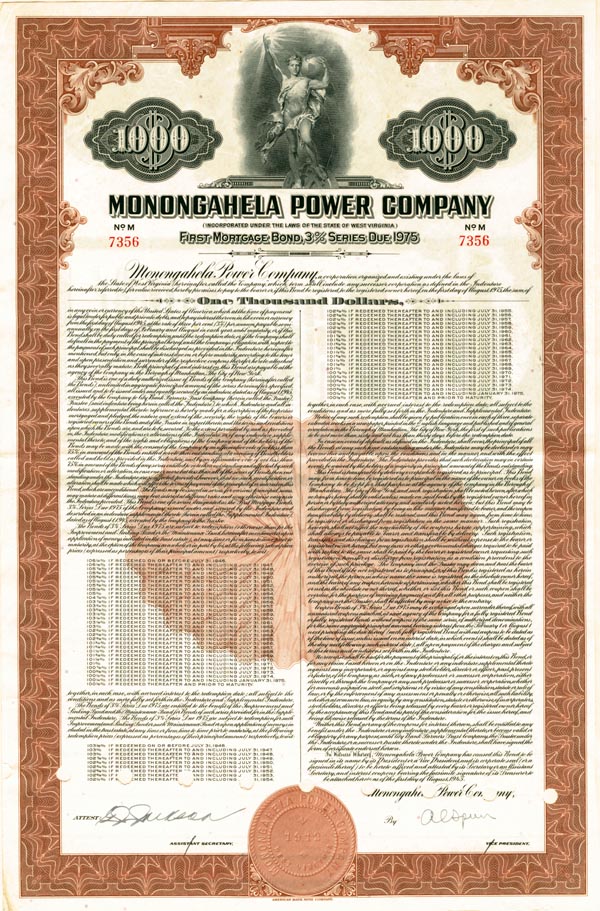 Years: 1945
$1,000 3% Bond printed by American Bank Note Co. The Monongahela Railway (AAR reporting marks MGA) was a coal-hauling short line railroad in Pennsylvania and West Virginia in the United States. It was jointly controlled by the Pennsylvania Railroad, New York Central subsidiary Pittsburgh and Lake Erie Railroad, and the Baltimore and Ohio Railroad, and subsequently by their joint successor Penn Central Transportation. The company operated its own line until it was merged into Conrail on May 1, 1993. The primary connection to both controlling systems was at Brownsville, Pennsylvania - with the south end of the P&LE's Pittsburgh, McKeesport and Youghiogheny Railroad and with the PRR's ex-Brownsville Railway. The PRR also interchanged traffic at Hoover, Pennsylvania, the end of its Coal Lick Run Branch. The B&O Railroad interchanged at Leckrone, Pennsylvania, and Rivesville, West Virginia.
Condition: Excellent

Item ordered may not be exact piece shown. All original and authentic.
Email this to a friend
Request Info
Previous Item (Wichita Falls and Northwestern Railway - Bond)    (Village of Bradford - Bond) Next Item