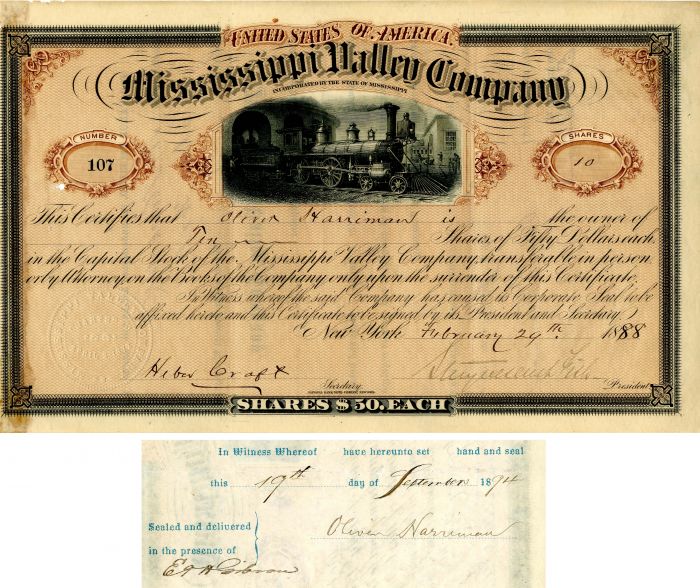 Stock signed by Stuyvesant Fish as president. Issued to Oliver Harriman of Brown, Harriman fame and signed at back.

Oliver Harriman (September 16, 1829  March 12, 1904) was an American businessman and member of the wealthy Harriman family. His parents were Orlando Harriman (17901867) and Anne Ingland (17951853). His brother, Orlando Harriman, was the father of railroad tycoon Edward H. Harriman and grandfather of New York Governor W. Averell Harriman. His grandfather, William Harriman, emigrated from England in 1795 and engaged successfully in trading and commercial pursuits. Harriman began his career in the dry goods commission house of McCurdy, Aldrich & Spencer. Later, with James Low, his father-in-law, Harriman co-founded Low, Harriman & Co., "one of the best known and wealthiest" dry goods firms in New York City. Harriman served on the Boards of Directors of Bank of America, the Guaranty Trust Company of New York (which later merged with J.P. Morgan & Co.), and the Mutual Life Insurance Company of New York (later known as Mutual of New York).

Item ordered may not be exact piece shown. All original and authentic.
Email this to a friend
Request Info
Previous Item (Minnesota Mining and Manufacturing Company signed by John. T. Michaud)    (Missouri, Kansas and Texas Railway Company Issued to and Signed by Jay Gould) Next Item