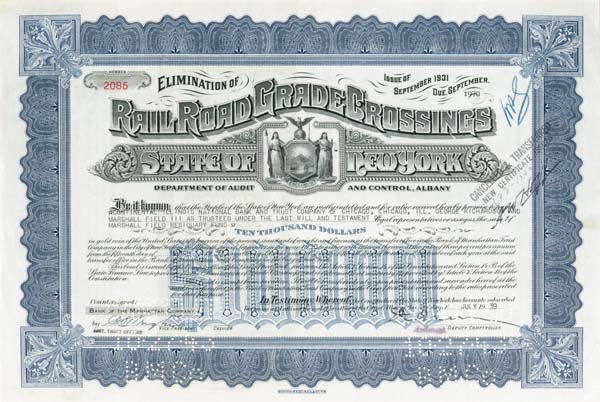 Marshall Field (1834-1906), Merchant. Began his career as a clerk in a dry goods store in Pittsfield, MA in 1851. By 1881 he was head of Marshall Field & Co., the largest wholesale and retail dry-goods establishment in the world. He was considered an able manager, a master of detail and a diplomat in employee relations. State of New York-Elimination of Railroad Grade Crossings Bond, 1939-40, issued to the Marshall Field Estate. Engraved by Quayle & Son, NY. Nice!!

Marshall Field (August 18, 1834  January 16, 1906) was an American entrepreneur and the founder of Marshall Field and Company, the Chicago-based department stores. His business was renowned for its then-exceptional level of quality and customer service. Field is also known for some of his philanthropic donations, providing funding for the Field Museum of Natural History and donating land for the campus of the University of Chicago. Marshall Field was born on a farm in Conway, Franklin County, Massachusetts, the son of John Field IV and wife Fidelia Nash. His family was descended from Puritans who had come to America as early as 1650. At the age of 17, he moved to Pittsfield, Berkshire County, Massachusetts, where he first worked in a dry goods store. He left Massachusetts at the age of 18 for new opportunities in the rapidly expanding West. In 1856, at age 21, he went to live with his brother in Chicago, Illinois, and obtained employment at leading dry goods merchant Cooley, Wadsworth & Co., which was to become Cooley, Farwell & Co. in 1857. In 1862, Field purchased a partnership with the reorganized firm of Farwell, Field & Co. In January 1865, Field and a partner, Levi Leiter, accepted an offer to become senior partners at the dry goods establishment of Potter Palmer. The new firm became known as "Field, Palmer, Leiter & Co." In 1867, after Field and Leiter could afford to buy him out, Palmer withdrew from the firm, and it was renamed "Field, Leiter & Company." Like many Chicago businessmen, Field's company was badly affected by the Great Chicago Fire of 1871, but reopened relatively quickly. The company also survived the Panic of 1873 because of their relatively low levels of debt. By 1881 Field had forced Leiter to sell his share of the business, and changed the store's name to "Marshall Field and Company". Field took an early 19th-century consumer landscape that was centered around the principle of caveat emptor, or "buyer beware", and transformed it into a plush shopping experience fit for the Gilded Age. Unconditional refunds, consistent pricing and international imports are among the Field innovations that became standards in quality retailing. Field's employees were also instructed not to push products on uninterested customers as was common practice in stores of the period. The quotes "Give the lady what she wants" and "The customer is always right" are attributed to Field, though the latter may also be an invention of Harry Gordon Selfridge while employed by Field. Though most famous today for his retail business, during his lifetime his wholesale business made far more money. During the 1880s, Field's wholesale business generated 5 times more revenue than retail annually. The wholesale business even had its own landmark building, the Marshall Field's Wholesale Store, erected in 1887. Revenue from the Marshall Field's retail business did not surpass the company's wholesale business until after Field's death. Field was highly suspicious of organized labor throughout his career, and prohibited unionization among his employees. During the time of the Haymarket Riot, the wives of the defendants initiated an appeal, to which all of the local businessmen agreed except for Field. Journalist and reformer Henry Demarest Lloyd led a national campaign to grant clemency. Even bankers like Lyman J. Gage favored clemency, believing that moderation would lead to improved relations between capital and labor. Potter Palmer and Charles Hutchinson were inclined to agree, but Marshall Field was not. A number of other men confided to Gage that they were not willing to publicly disagree with Field, the wealthiest and most powerful businessman in Chicago. Field would also oppose organized labor during the Teamster's Strike in 1905.