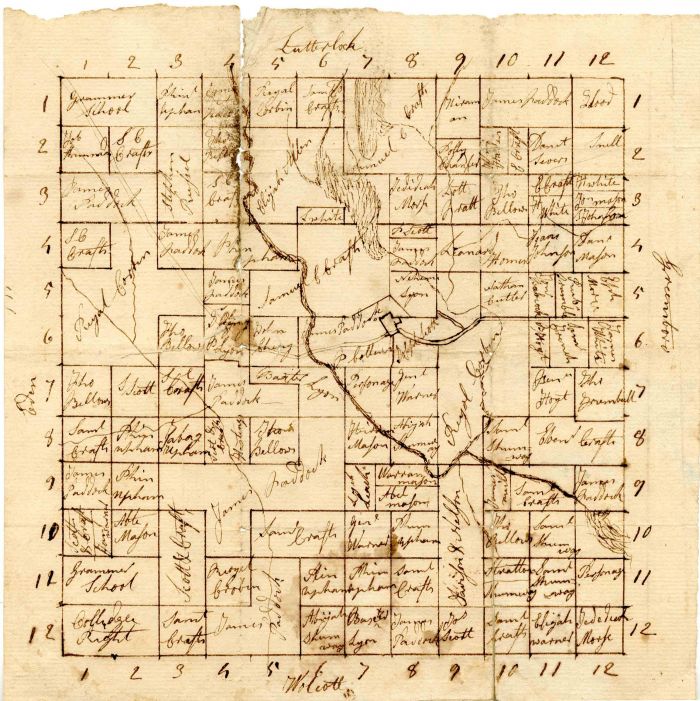 Estate of Governor Erastus Fairbanks of Vermont. Found with papers of the Governor. Some paper loss at folds.

Fairbanks was born in Brimfield, Massachusetts to Phebe (Paddock) Fairbanks (17601853) and Joseph Fairbanks (17631846). Ephraim Paddock, the brother of Phebe Paddock, was his uncle. He studied law but abandoned it for mercantile pursuits, and operated a store in Wheelock, Vermont. He married Lois Crossman (17921866) on May 30, 1815. The couple had nine children. Finally settling in St. Johnsbury, Vermont, in 1824, Fairbanks formed a partnership, E. & T. Fairbanks & Co., with his brother Thaddeus for the manufacture of scales, stoves and plows. Thaddeus Fairbanks later invented the first platform scale, which made it possible to calculate the weight of farm products and other goods shipped by wagon and railroad car; the device proved so successful that the renamed Fairbanks Scales company became the largest employer in the state. The Fairbanks family was involved in numerous charitable and civic endeavors throughout St. Johnsbury and the surrounding towns, including the 1842 founding of St. Johnsbury Academy. Fairbanks was a member of the Vermont House of Representatives from 1836 to 1838. He was President of the Passumpsic Railroad, which completed a line from White River to St. Johnsbury in 1850. He was a Presidential Elector for Vermont in 1844 and 1848. Fairbanks was elected the 21st Governor of Vermont in 1851 and served from 1852 to 1853. During this term, a law was passed forbidding the sale or traffic of intoxicating beverages. The law was not repealed until 1902. Fairbanks was one of the founders of the Republican Party, and a delegate from Vermont to the first Republican National Convention in 1856. He was 26th Governor of Vermont from 1860 to 1861. During his second term he rendered valuable aid in the equipment and dispatch of troops in the early days of the American Civil War.

Condition: Excellent
Item ordered may not be exact piece shown. All original and authentic.
OUT OF STOCK
Request re-stock notice?
Email this to a friend
Request Info
Previous Item (Sample Calendar of the "Conquering Hero")    (Letter from the International Stock Food Company) Next Item