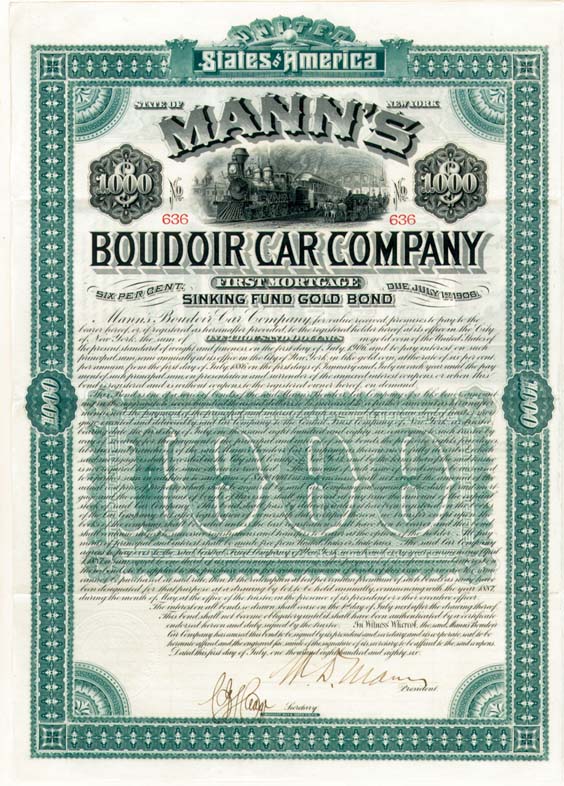 William D'Alton Mann (1839-1920), Important Civil War Officer, Editor, Inventor. Captain 1st Michigan Cavalry, organized 1st Mounted Rifles, afterwards 5th Mich. Cavalry, and Daniel's Horse Battery, 1862; organized 7th Mich. Cavalry and Gunther's Horse Battery (these troops composing Mich. Cavalry Brigade); Colonel 1862; devised improvements in accoutrements of troops, used in the US and Austrian Armies. He was a pioneer manufacturer of cotton-seed oil; several years proprietor of the Mobile Register, invented and patented the boudoir car in 1871, and introduced it throughout Europe; organized the Mann Boudoir Car Co.-NY in 1883 which was later bought out by Pullman Co. This gorgeous $1,000 Gold Bond dated 1886 is engraved by Franklin Bank Note Co.-NY and is signed at front by Mann as President. The decent number of coupons are equally attractive. Even the back of the bond has an attractive Female vignette. Particularly Exciting in many ways!!!
Condition: Excellent

Item ordered may not be exact piece shown. All original and authentic.
Email this to a friend
Request Info
Previous Item (Maine Beet Sugar Company, of Portland Maine - SOLD)    (Marconi Wireless Telegraph Company Issued to and signed by Alfonso Marconi) Next Item