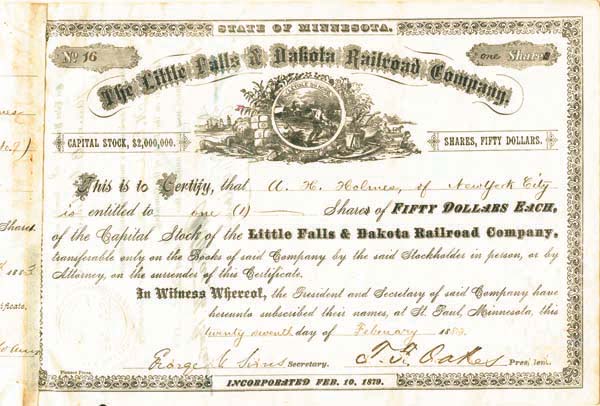 Years: 1881-98
Eastwest rail lines had been laid across Minnesota by the early 1870's, but they did not cross Pope County and settlement remained low. In 1879 local entrepreneurs incorporated the Little Falls and Dakota Railroad to build a new east-west branch line from Little Falls, Minnesota, to the Dakota border. The Northern Pacific Railway and Great Northern Railway, locked in a rivalry for national dominance, each took an interest in the new region and the lucrative land rights that would come with it. The Great Northern hurriedly built tracks for the St. Cloud and Lake Traverse Railway from Browns Valley Junction, about one and a half miles south of Morris, Minnesota, and south of the Little Falls and Dakota Line; building the line east towards Starbuck, MN. However the Little Falls and Dakota, secretly backed by Northern Pacific, reached Starbuck first, securing the critical mail franchise for the town, and then continuing on to Morris, MN. Great Northern traffic was light so the Morris, MN to Starbuck, MN section of the St. Cloud and Lake Traverse was abandoned not long after the line was completed. Upon completion in 1882 the Little Falls and Dakota line was immediately leased by the Northern Pacific and purchased outright in 1900. (Wikipedia). Also available unissued at a lesser price. Please inquire if interested.