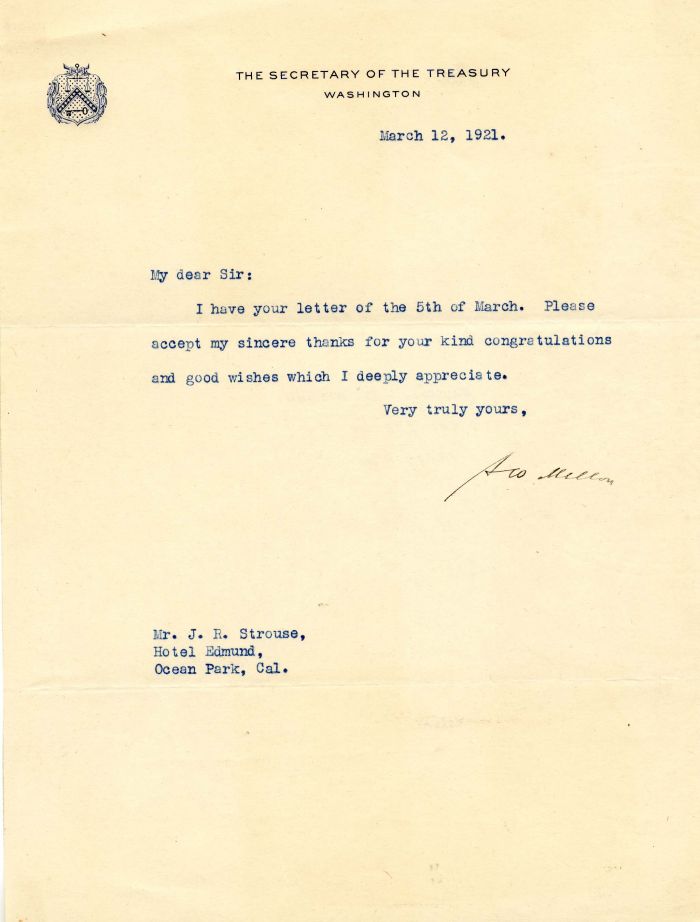 Andrew William Mellon ( March 24, 1855  August 26, 1937) was an American banker, businessman, industrialist, philanthropist, art collector, U.S. Ambassador to the United Kingdom and U.S. Secretary of the Treasury from March 4, 1921 to February 12, 1932. He and his brother Richard Beatty Mellon and (independently) Andrew Carnegie founded two institutes of higher education that would eventually merge to form Carnegie Mellon University. Mellon demonstrated financial ability early. In 1872 his father set him up in a lumber and coal business, which he soon turned into a profitable enterprise. He joined his father's banking firm, T. Mellon & Sons, in 1880 and two years later had ownership of the bank transferred to him. In 1889, Mellon helped organize the Union Trust Company and Union Savings Bank of Pittsburgh. He also branched into industrial activities: oil, steel, shipbuilding, and construction. Areas where Mellon's backing created giant enterprises included aluminum, industrial abrasives ("carborundum"), and coke. Mellon financed Charles Martin Hall, whose refinery grew into the Aluminum Company of America (Alcoa). He became the partner of Edward Goodrich Acheson in manufacturing silicon carbide, a revolutionary abrasive, in the Carborundum Company. He created an entire industry through his help to Heinrich Koppers, inventor of coke ovens which transformed industrial waste into usable products such as coal-gas, coal-tar, and sulfur. He also became an early investor in the New York Shipbuilding Corporation. Mellon was one of the wealthiest people in the United States, the third-highest income-tax payer in the mid-1920s, behind John D. Rockefeller and Henry Ford. While he served as Secretary of the U.S. Treasury Department his wealth peaked at around $300$400 million in 19291930. Mellon was a member of the South Fork Fishing and Hunting Club (whose earthen dam failed in May, 1889, causing the Johnstown Flood), and he belonged to the Duquesne Club in Pittsburgh. Along with his closest friends Henry Clay Frick and Philander Knox (also South Fork Fishing and Hunting Club members), Mellon served as a director of the Pittsburgh National Bank of Commerce. In 1900, Mellon, then 45 years old, married Nora Mary McMullen, a 20-year-old Englishwoman who was the daughter of Alexander P. McMullen, a major shareholder of the Guinness Brewing Co. They had 2 children, Ailsa, born in 1901, and Paul, born in 1907. Their marriage ended in a bitter divorce in 1912, which was granted on grounds of Nora Mellon's desertion and her adultery with Capt. George Alfred Curphey, an English soldier, and other men. Mellon did not remarry. Two years after the Lees' divorce in 1928, Nora Lee resumed the surname Mellon, at the request of her son, Paul. Andrew Mellon was made a Freemason in 1928, and raised in 1931. During his retirement years, as he had done in earlier years, Mellon was an active philanthropist, and gave generously of his private fortune to support art and research causes. In 1937, he donated his substantial art collection, collected at a cost of $25 million and valued at $40 million, plus $10 million for construction, to establish the National Gallery of Art on the National Mall in Washington, D.C. The Gallery was authorized in 1937 by Congress. The administration of President Franklin D. Roosevelt subjected Mellon to intense investigation of his personal income tax returns. The US Justice Department empaneled a grand jury, which declined to issue an indictment. Roosevelt hated Mellon, as the embodiment of everything he thought was bad about the 1920s; Mellon vehemently denied the charges. A two-year civil action beginning in 1935, dubbed the "Mellon Tax Trial", eventually exonerated Mellon, albeit several months after his death.

Condition: Excellent
Item ordered may not be exact piece shown. All original and authentic.
Email this to a friend
Request Info
Previous Item (Autographed Letter signed by Philo Remington)    (Memoir of General Lyon) Next Item