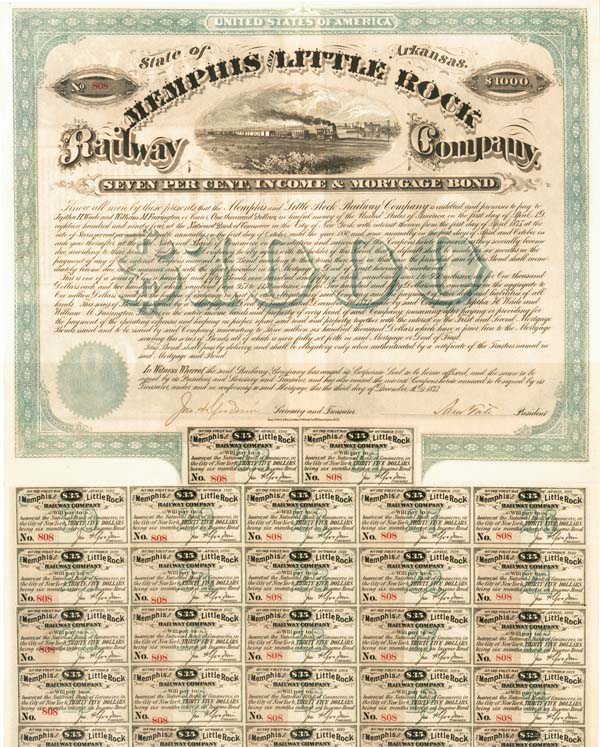 $1000 7% Uncanceled Bond. All 32 coupons present. Printer-Henry Seibert & Bros, NY. A great autograph on a great bond!!!
Jeptha H. Wade (1811-1890), Financier. Wade was one of the founders of the American commercial telegraph system. He started as an itinerant painter of portraits and branched out into photography when he learned of the invention of the daguerreotype and purchased a camera to widen his field of portraiture. The news of the success of the telegraph in 1844 led him to study the possibilities of the invention of Morse and in 1847 he contracted to build a telegraph line from Detroit to Jackson "a frail, one wire affair." Other lines, known as the Wade Lines, followed in rapid succession. In 1856, most of these lines were combined in the Western Union Telegraph Co. Wade became general agent. Western expansion put the pony express out of business and prepared the way for the transcontinental railroad and the daily mail. Later in 1866, he became President of the enlarged Western Union. He moved to Cleveland and was involved in banking, railroad building and management. Great Southern Bond signed by Jeptha H. Wade at back as a Trustee. A great autograph on a great bond!!!

The Memphis and Little Rock Railroad was chartered in the U.S. state of Arkansas in 1853. The line ran from Hopefield (now West Memphis, Arkansas) on the east to Huntersville (now North Little Rock, Arkansas) on the west. The eastern third was completed in 1858 and the western third was built by 1862. During the American Civil War, the Union Army seized control of the line and used the western section to supply its occupation force in Little Rock. The center section was finally completed in 1871. The railroad was subjected to frequent damage from floods and suffered from financial problems. It was sold in 1873, 1877, 1887, 1898, and 1900 before eventually becoming part of the Chicago, Rock Island and Pacific Railroad.

The Memphis and Little Rock Railroad (M&LR) was chartered by the State of Arkansas on January 10, 1853. Construction of the 5 ft 6 in (1.676 m) gauge railroad was estimated to cost $3.2 million. John H. Bradley & Company won the contract to build the line. The survey work began in 1854, but the first track was only laid in 1856 at Hopefield, across the Mississippi River from Memphis, Tennessee. By November 1858, the eastern third of the line was completed from Hopefield to Madison, Arkansas on the St. Francis River. Construction on the western section began in 1861 at Huntersville, across the Arkansas River from Little Rock. By 1862, the western third was completed as far as DeValls Bluff on the White River. The railroad, though incomplete in its central section, allowed travelers to go from Little Rock to Memphis an entire day faster than by steamboat alone.

Once Steele's Union forces were in occupation of Little Rock, the M&LR became a key link to keep them supplied. Federal steamboats brought supplies up the White River to DeValls Bluff where there was an important depot. From DeValls Bluff the supplies were transported via the M&LR to Little Rock. Confederates launched raids to block the vital railroad, but these were unable to interrupt the supply route for long periods. On July 6, 1864, Confederate partisans managed to derail a train at Hick's Station, while on August 24, 1864, Brigadier General Joseph O. Shelby's raiders succeeded in damaging the railroad at Ashley's Station.

On November 1, 1865, control of the M&LR was returned to the railroad company and construction of the central section was undertaken. Much of the existing track had to be relaid and the Hopefield shops rebuilt. In 1868, the state of Arkansas provided $1.2 million to finish its construction. Engineering problems proved especially difficult to overcome in the lowlands between the Cache and L'Anguille Rivers. In 1871, the drawbridge at DeValls Bluff was finished and on April 11, 1871 the last track was completed. A newspaper reporter from New York City who made the trip from Memphis to Little Rock wrote that, "It was the roughest trip you ever saw in your life", and that the train derailed twice. The central and eastern sections were plagued by floods, so that in some places the track was anchored to trees on the upstream side of the roadbed. In the winter and spring, the eastern section was often closed down as impassible.

The railroad defaulted after running into financial trouble, and it was sold to the Memphis and Little Rock Railway in December 1873. Subsequent failures resulted in sale to the Memphis and Little Rock Railroad in 1877 and the Little Rock and Memphis Railroad in 1887. A Mississippi River flood in April 1897 wiped out 40 miles of track in the eastern section. In October 1898, the railroad was sold at foreclosure for only $325,000 to the Choctaw and Memphis Railroad. In 1900, another sale was made to the Choctaw, Oklahoma and Gulf Railroad before it finally ended up as part of the Chicago, Rock Island and Pacific Railroad.