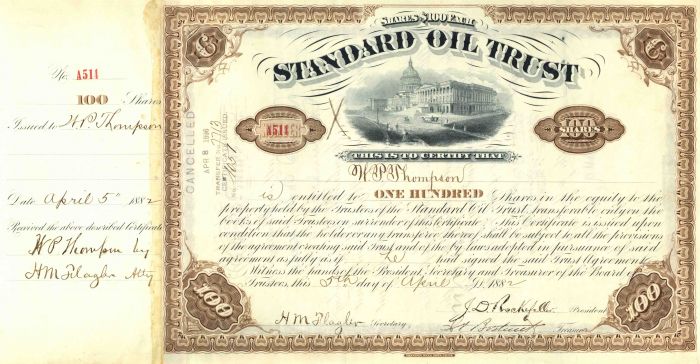 STANDARD OIL TRUST. 100 share stock, personally signed by John D. Rockefeller and Henry M. Flagler. Standard Oil Trust is considered to be the most significant in American financial history. Includes portraits. The Standard Oil generated wealth of John D. Rockefeller was estimated at $900 million in 1913, equivalent to $189.6 Billion today. This is more than the riches of Bill Gates, Warren Buffett, and the Walton family combined! In contrast, Rockefellers first job, in the 1850s, earned him a wage of just $3.57 per week. Rockefeller developed a reputation over his lifetime of ruthlessness. Tales of men who had been ruined by him were accompanied by stories of bribed lawmakers, of railroad corruption, and of unfair discriminations. Some of the old headlines read Rockefeller Indicted Again, Standard Oil Before the Bar, Standard Oil Magnates Dodge Subpoenas, Rockefeller Faces Justice, Later headlines changed dramatically in tone including Rockefeller Gives Another Million to Unemployment Fund, Rockefeller Foundation Fights Pellagra in Georgia, and John D. Gives Dimes to Children. Some speculate that his habit of giving dimes to people he met was based on the advice of Ivy Ledbetter Lee in 1914 who was hired to help manage the Rockefeller Empires image. Lee is considered the leading pioneer of todays public relations industry, working first for J.P. Morgan, then for Rockefeller. John D. Rockefeller soon engaged in the practice of carrying around a bag of dimes, handing one to everyone he met. Many people feel that this was John D Rockefellers way of getting closer to the public. It is said that he used to do it with relish, and so when someone approached him he would hand him a shiny dime in order to start a conversation. Late in life Rockefeller became known as "The Man Who Gave Away Shiny New Dimes". He reportedly gave away about $10,000 worth of dimes before his death, 100,000 Mercury dimes! A quote from Golf Digest-2002 By 1920 Rockefeller already had become famous for handing out dimes to street urchins whom he thought deserving of spiritual encouragement or moral reward, and in Florida one winter he bestowed a dime on Harvey Firestone, president of the tire and rubber company, for having made a long and treacherous downhill putt. An additional quote from the biography John D. Rockefeller by Barnie F. Winkelman states The shiny dimes that the aging Rockefeller handed out were a symbol and a sermon. The symbol was frequently misunderstood and the moral of the sermon quite generally distorted. The little gift was a token and a good-luck piece. In a broad sense it emphasized thrift, but not as a sure road to wealth, rather as a way and a habit of life. Winkelman further offers a quote by Rockefeller It is the duty of a man to get all the money he honestly can and to give all he can. This is the basis of progress. In this way morality and religion move forward and civilization is advanced.