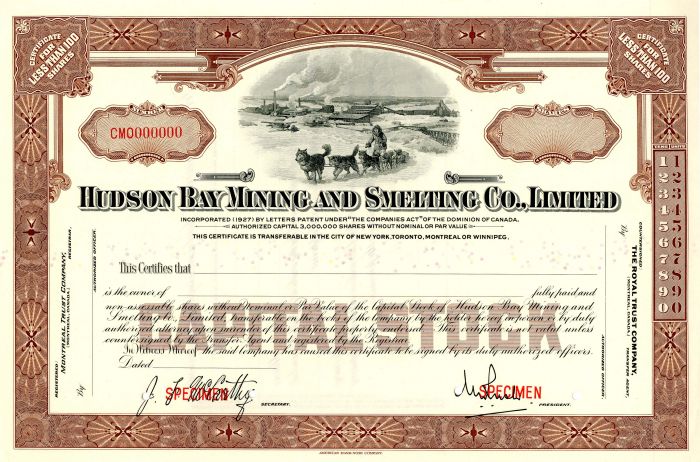 Hudbay Minerals Inc. is a Canadian mining corporation. Tracing its history to the Hudson Bay Mining and Smelting Co., Limited (HBMS), the company has been exploring and mining in Manitoba for over 80 years. Much of its history has centered on Flin Flon, Manitoba. HudBay now has operations in Manitoba, Peru, and Yukon and is currently building a copper mine in southern Arizona.

The Flin Flon orebody was discovered by David Collins, a local trapper, and shown to prospector Tom Creighton in 1914. The first claim was registered in 1915. It took more than a dozen years to bring the mine into production because the huge, high grade ore body required large amounts of hydro energy, was isolated, and copper production required a smelter.

In 1927, Cornelius Vanderbilt Whitney (a member of the Whitney family of New York) founded Hudson Bay Mining & Smelting (HBM&S), which took over controlling interest in the Flin Flon property. By 1930, the mine, smelter, hydroelectric dam and railroad were in full operation.

On December 21, 2004, OntZinc Corporation acquired HBM&S for C$316 million from Anglo American plc. The purchase was financed by a public offering of C$143.8 million of equity and the issue of US$175 million of debt. The company then changed its name to Hudbay Minerals Inc.

The corporate head office was located in Winnipeg, Manitoba, but moved to Toronto in 2008.

Founded as Pan American Resources Inc., the company first went public on the Montreal Exchange under the symbol PAN in the 3rd quarter of 1996.

In November 2008, Hudbay Minerals and Lundin Mining announced an agreement to merge. However, in February 2009, after a ruling by the Ontario Securities Commission that Hudbay must allow its shareholders to vote on the plan, the companies announced that the deal had been terminated after realizing it was unlikely to win shareholder support.

On January 9, 2009, Hudbay Minerals suspended operations (and continue on care and maintenance) at Chisel North Mine in Snow Lake, Manitoba. The mine stopped producing in late February 2009, due to falling zinc metal prices and increased costs, and restarted operations in 2010.

Currently, the original 1930 Island Falls hydroelectric facility is owned and operated by SaskPower.

The Fenix ferro-nickel project in Guatemala is owned by Compañía Guatemalteca de Niquel (CGN), which was 98.2% owned by HudBay Minerals from August 2008 to September 2011. The Fenix Project in eastern Guatemala is a substantial brownfield nickel laterite mine and process plant that has been on care and maintenance since 1980.

HudBay Minerals and two of its subsidiaries are subject to an ongoing $12 million lawsuit in Canada over the killing of a prominent Mayan community leader at the Fenix Mining Project. The lawsuit alleges that on September 27, 2009, security personnel employed at the Fenix mine surrounded, beat and hacked at Adolfo Ich Chamán with machetes before shooting him in the head at close range in an unprovoked attack. An arrest warrant was issued for the Head of Security at the Fenix mine, Mynor Ronaldo Padilla Gonzáles. A non-governmental organization has referred to the murder as the "targeted killing of a well-known community leader." Amnesty International has stated with respect to the murder allegation "[t]he allegations are very serious, and Amnesty International calls for a swift, full and impartial investigation into the death of Adolfo Ich Chamán and other incidents of violence, to make the results public and to bring those responsible to justice".

HudBay states that it and CGN have cooperated fully with all investigations conducted by Guatemalan authorities in connection with the incidents which occurred on September 27, 2009, in El Estor. CGN carried out an internal investigation and determined that none of its employees or security personnel were involved in the death of Chamán.

In June 2013, the Ontario Superior Court of Justice ruled that the Canadian company could be held legally responsible for crimes committed in Guatemala, including the alleged murder of Adolfo Ich Chamán and the alleged sexual assault of 11 women from Lote Ocho. A jury notice was filed in December 2013. As of February 2018, the court action was ongoing.

The Fenix mining project is also subject to ongoing land claims by local Mayan communities. In 2006, the International Labour Organization, an agency of the United Nations, ruled that Guatemala had breached international law by granting the Fenix mining concession without first consulting with local Mayan people. The ILO released a report discussing the violation in 2007.

In late 2006 and early 2007, Skye Resources (acquired by HudBay Minerals in 2008, renamed HMI Nickel and subsequently sold by HudBay in 2011) sought forced evictions of Mayan communities located on contested mine land. Homes were burned to the ground during these evictions.