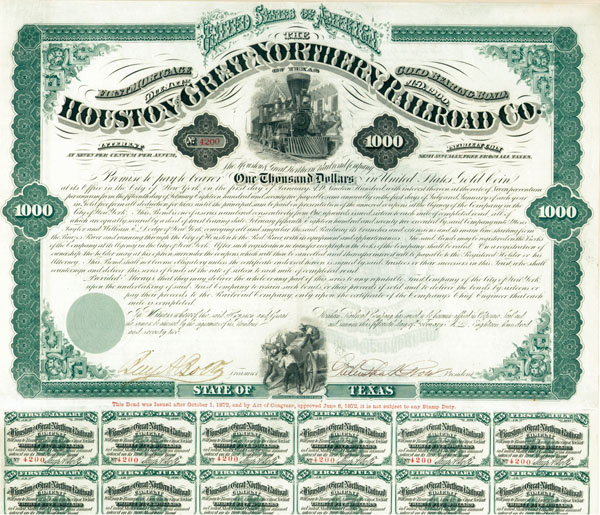 The I&GN, like other railroads of its time, had many financial troubles and went into receivership on several occasions. Jay Gould acquired control of the I&GN in December 1880. Due to his control of the Missouri Pacific (Mopac) and the Texas and Pacific Railroad, the three were operated as one system, although they each retained their separate corporate identities and seniority districts.

In a bit of planned corporate maneuvering to keep the I-GN within the Mopac fold, the Gulf Coast Lines subsidiary, New Orleans, Texas and Mexico Railway, bought the I-GN on June 30, 1924; subsequently, the Gulf Coast Lines were bought by the Missouri Pacific on January 1, 1925. Finally, on March 1, 1956, all of the GCL subsidiaries were merged into the parent Missouri Pacific Railroad Company, and the I-GN ceased its corporate existence.

In the 1960s, many of the redundant out-of-the-way lines were abandoned, including Waco to Marlin and Bryan to Navasota. The latter route was subsequently traversed via trackage rights over the Southern Pacific Railroad between the same two points. The Missouri Pacific was merged into the Union Pacific Railroad in 1997.

Item ordered may not be exact piece shown. All original and authentic.
Email this to a friend
Request Info
Previous Item (Territory of Dakota, County of Lawrence Bond)    (United States Second Liberty Loan of 1917 - Federal Subscribers Certificate) Next Item