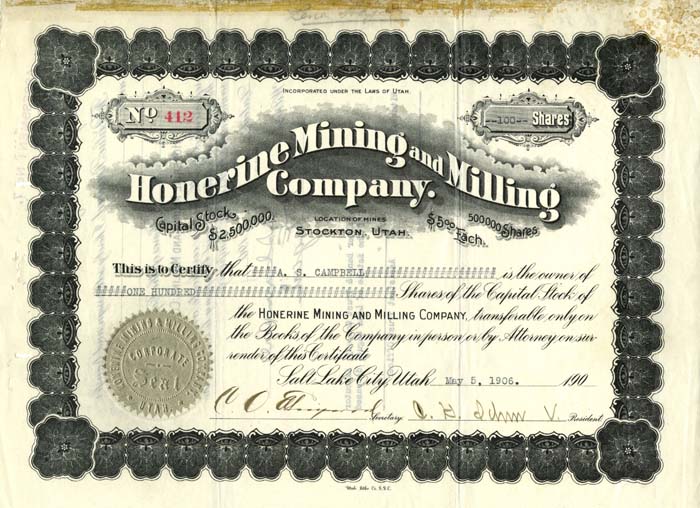 Stockton is a town in Tooele County, Utah, United States. It is part of the Salt Lake City, Utah Metropolitan Statistical Area. The population was 616 at the 2010 census.

Stockton was born of the first mining boom in the Utah Territory. The mining industry began in the early 1860s with the arrival of Col. Patrick E. Connor, commander of the Third California Volunteers, who had been sent to the territory in 1862 to keep an eye on the overland mail routes during the Civil War. Connor wanted to counterbalance his perceived dominance of Mormon leaders in the area by exploring and developing the territory's mineral wealth. He posited that if precious metals could be discovered in Utah, the resulting flood of miners into the territory would overwhelm the Mormons, and outsiders would balance the Church's power. So he sent the men under his command out to prospect, and they almost singlehandedly opened the precious metals industry in Utah in 1863 by locating deposits, staking claims, and establishing mining districts. Mines were dug on the western slopes of the Oquirrh Mountains, and Stockton became a base camp for some these operations.

The small town was first settled in 1863. Under the growing influence of the mining industry, the population swelled to 4,000 residents. It was the first town in the Utah Territories to have its streets surveyed and named, and it later gained the distinction of being the first to get electric lights, and the first to get a telephone. A town cemetery (northwest of the settlement) was created shortly into the twentieth century. Other amenities were slowly addressed, and they now include a ball diamond, a city park, a city hall, a fire station, a municipal water system, and a centralized wastewater collection/disposal system.

A sesquicentennial commemoration was held on April 27, 2013, to mark the town's founding. Part of the ceremony was the unveiling of a welcome sign, mounted on the north end town and visible from the main highway through the town's business district, SR-36.

Condition: Fine but with stains