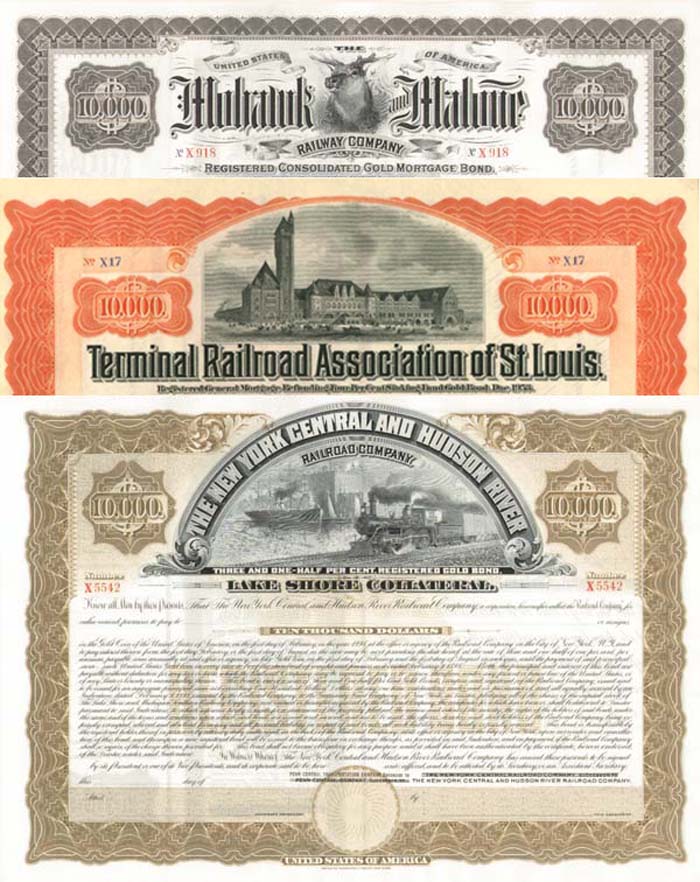 Years: 1920's or so
1920's or so, New York Central & Hudson River RR, Terminal Railroad Association of St. Louis, and Mohawk and Malone Railway. All Unissued with Superb graphics by American Bank Note and in Choice Mint Condition. High denomination bonds have become quite popular especially considering that a $10,000 US piece of Currency is $60,000 and up as a collectible! Imagine, 3 $10,000 Bonds!!! Scarce so nice. The Set of 3. Dr. William Seward Webb's Mohawk and Malone Railway crossed the northern Adirondacks at Tupper Lake Junction, just north of Tupper Lake. Webb was president of the Wagner Palace Car Company. He began by purchasing the narrow gauge Herkimer, Newport and Poland Railroad, which ran 16 miles from Herkimer to Poland, converting its trackage to standard gauge and straightening it to avoid multiple crossings of the West Canada Creek. He then had track built from Tupper Lake to Moira and thence to Montreal. This was called variously the Adirondack and St. Lawrence Railroad and the Mohawk and Malone. After 1893, it was controlled by the New York Central and Hudson River Railroad. It opened in 1892 from Malone Junction to Childwold Station with a branch from Lake Clear Junction to Saranac Lake. In 1913, it merged with the New York Central and Hudson River Railroad as the "Adirondack Division".