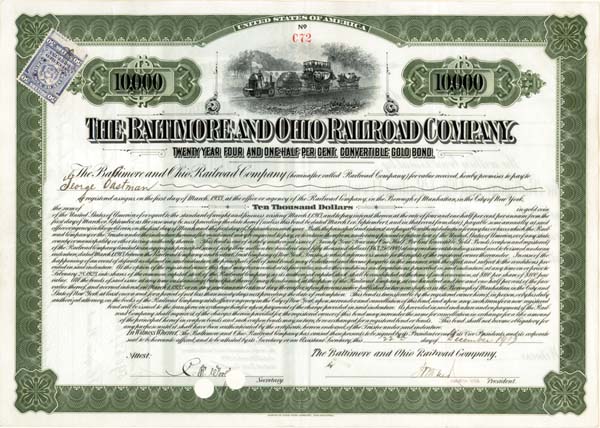 George Eastman (1854-1932), Eastman Kodak founder, Philanthropist. Known for his pioneering work in photography, he introduced the Kodak camera in 1888 with the slogan You press the button, we do the rest. High denomination $10,000, 1913 Bond issued to Eastman, not signed. Tom Thumb graphics by American Bank Note, Philadelphia. Very Rare! Great!!! The Baltimore and Ohio Railroad (reporting marks B&O, BO) was the first common carrier railroad and the oldest railroad in the United States, with its first section opening in 1830. It came into being mostly because the city of Baltimore wanted to compete with the newly constructed Erie Canal (which served New York City) and another canal being proposed by Pennsylvania, which would have connected Philadelphia and Pittsburgh. At first this railroad was located entirely in the state of Maryland, with an original line built from the port of Baltimore west to Sandy Hook. At this point to continue westward, it had to cross into Virginia (now West Virginia) over the Potomac River, adjacent to the confluence of the Potomac and Shenandoah rivers. From there it passed through Virginia from Harpers Ferry to a point just west of the junction of Patterson Creek and the North Branch Potomac River, where it crossed back into Maryland to reach Cumberland. From there it was extended to the Ohio River at Wheeling and a few years later also to Parkersburg, West Virginia. It continued to construct lines into Ohio, including a junction at Portsmouth. In later years, B&O advertising carried the motto: "Linking 13 Great States with the Nation." As part of a series of mergers, the B&O is now part of the CSX Transportation (CSX) network. The B&O also included the Leiper Railroad, the first permanent horse-drawn railroad in the U.S. At the end of 1970, the B&O operated 5,552 miles of road and 10,449 miles of track, not including the Staten Island Rapid Transit (SIRT) or the Reading and its subsidiaries. It includes the oldest operational railroad bridge in the United States. When CSX established the B&O Railroad Museum as a separate entity from the corporation, it donated some of the former B&O Mount Clare Shops in Baltimore, including the Mt. Clare roundhouse, to the museum, while selling the rest of the property. The B&O Warehouse at the Camden Yards rail junction in Baltimore now dominates the view over the right-field wall at the Baltimore Orioles' current home, Oriole Park at Camden Yards. Part of the B&O Railroad's immortality has come from being one of the four featured railroads on the U.S. version of the board game Monopoly. It is the only railroad on the board that did not directly serve Atlantic City, New Jersey. (Wikipedia) SOLD