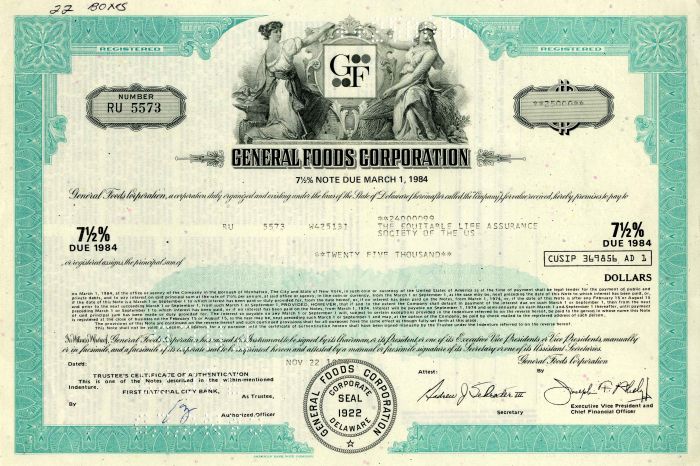 General Foods Corporation was a company whose direct predecessor was established in the United States by Charles William Post as the Postum Cereal Company in 1895. The name "General Foods" was adopted in 1929, after several corporate acquisitions, by Marjorie Post after she inherited the established cereal business from her father C. W. Post. In November 1985, General Foods was acquired by Philip Morris Companies (now Altria Group, Inc.) for $5.6 billion, the largest non-oil acquisition to that time. In December 1988, Philip Morris acquired Kraft Foods Inc., and, in 1990, combined the two food companies as Kraft Foods. "General Foods" was dropped from the corporate name in 1995; a line of caffeinated hot beverage mixes continued to carry the General Foods International name until 2010.

Roots of General Foods can be traced to the Post Cereal Company, founded by C. W. Post in 1895 in Battle Creek, Michigan. Post was a patient at the Battle Creek Sanitarium (run by John Harvey Kellogg, brother of Kellogg Company founder Will Keith Kellogg), and was inspired by the diet there to start his food company (and become a rival to the Kellogg brothers, who sold their own breakfast cereals). Post invested $78 in his initial equipment and supplies and set up manufacturing in a barn on what was known as the 'Old Beardsley Farm'. His first product was Postum, a "cereal beverage" alternative to coffee made from wheat and molasses. The first cereal, Grape-Nuts, was developed in 1897 followed by Elijah's Manna in 1904 which was renamed Post Toasties in 1908.

After C.W. Post died in 1914, his daughter Marjorie Merriweather Post took over the company. The Postum Cereals company, which went on with some acquisitions such as Jell-O (gelatin dessert) in 1925, Walter Baker & Company (chocolate) in 1927, Maxwell House (coffee) in 1928, and other food brands.

By far the most important acquisition of 1929 was of the frozen-food company owned by Clarence Birdseye, called "General Seafood Corporation". Birdseye (December 9, 1886 - October 7, 1956) was one of the most important entrepreneurs in the history of the food industry. Born in New York City, he became interested in the frozen preservation of food during the course of working as a fur trader in Labrador between 1912 and 1916. By 1923, he had developed a commercially viable process for quick-freezing foods using a belt mechanism, which he patented. In 1924, with backing from three investors, he formed the "General Seafoods Company", in Gloucester, Massachusetts, to produce frozen haddock fillets packed in plain cardboard boxes.

The founder's daughter, Marjorie Merriweather Post, was first to become excited about the prospects for the frozen foods business. In 1926, she had put into port at Gloucester on her yacht, Sea Cloud, and was served a luncheon meal which, she learned to her amazement, had been frozen six months before. Despite her enthusiasm, it took Post three years to convince Postum's management to acquire the company. Postum paid $10.75 million for a 51% interest and its partner, Goldman Sachs, paid $12.5 million for the other 49%. Following this acquisition, Postum, Inc changed its name to General Foods Corporation. Goldman sold its share back to General Foods in 1932, apparently at a slight loss.

Shortly after the acquisition, General Foods began test-marketing an expanded line of frozen foods, but the company quickly realized that a packaging process alone would not be sufficient to market frozen products in stores. To be sold, the packages had to be kept frozen while on display, so Birdseye engineers began development of a freezer cabinet designed specifically to hold frozen foods. The cabinet, which first appeared in 1934, required a great deal of space and electricity, which were not readily available in most grocery stores of the period. For those stores which could accommodate them, the payback was immediate. Housewives quickly realized that keeping packages of frozen food in the icebox could mean fresher meals and fewer trips to the market.

The company published a cook book in 1932, the General Foods Cook Book, dedicated "To the American homemaker". Five editions were published between 1932 and 1937. The book includes photographs (among which is "General Foods offers over twenty famous products for your well-stocked pantry shelf") and a subject index.

Item ordered may not be exact piece shown. All original and authentic.
Email this to a friend
Request Info
Previous Item (Marysville Union High School District - $1,000 Bond)    (Corporation of the City of Baltimore - $200 Bond) Next Item