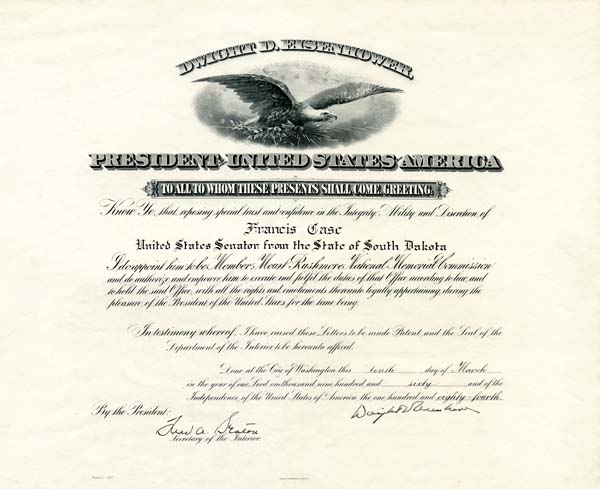 Dwight David "Ike" Eisenhower (October 14, 1890  March 28, 1969) was a five-star general in the United States Army and the 34th President of the United States, from 1953 until 1961, and the last to be born in the 19th century. During World War II, he served as Supreme Commander of the Allied forces in Europe, with responsibility for planning and supervising the successful invasion of France and Germany in 194445, from the Western Front. In 1951, he became the first supreme commander of NATO. A Republican, Eisenhower entered the 1952 presidential race to counter the non-interventionism of Sen. Robert A. Taft, and to crusade against "Communism, Korea and corruption". He won by a landslide, defeating Democrat Adlai Stevenson and ending two decades of the New Deal Coalition holding the White House. As President, Eisenhower concluded negotiations with China to end the Korean War. His New Look, a policy of nuclear deterrence, gave priority to inexpensive nuclear weapons while reducing the funding for the other military forces to keep pressure on the Soviet Union and reduce federal deficits at the same time. He began NASA to compete against the Soviet Union in the space race. His intervention during the Suez Crisis was later acknowledged by Eisenhower himself as his greatest foreign policy mistake. Near the end of his term, the Eisenhower Administration was embarrassed by the U-2 incident and was planning the Bay of Pigs invasion. On the domestic front, he covertly helped remove Joseph McCarthy from power but otherwise left most political actions to his Vice President, Richard Nixon. He was a moderate conservative who continued the New Deal policies, and in fact enlarged the scope of Social Security, and signed the Federal-Aid Highway Act of 1956. Though passive on civil rights at first, he sent federal troops to enforce the Supreme Court's ruling to desegregate schools. He was the first term-limited president in accordance with the 22nd Amendment. Eisenhower's two terms were mainly peaceful, and generally prosperous except for a sharp economic recession in 195859. Although public approval for his administration was comparatively low by the end of his term, his reputation improved over time and in recent surveys of historians, Eisenhower is often ranked as one of the top ten U.S. Presidents.
Dwight D. Eisenhower, President of the United States, signs this appointment for Francis Case to be "Member, Mount Rushmore National Memorial Commission". Meaures 19 1/2" x 16".