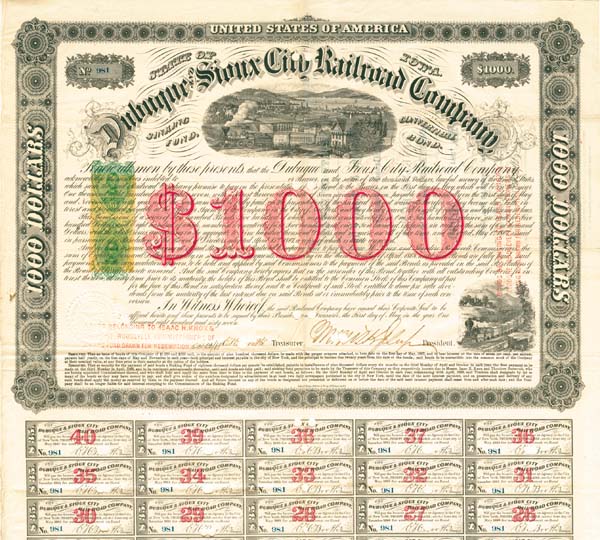 The Dubuque and Sioux City Railroad was incorporated on August 1, 1860 after Morris K. Jesup forced the DUBUQUE AND PACIFIC RAILROAD into receivership. Jesup held many of the railroad's defaulted bonds and wanted to put the line on a firm financial basis. Jesup controlled the company for twenty-seven years and held the presidency from 1866 to 1887.

The railroad reached Cedar Falls, Iowa in 1861 where the celebration included the placing of a cedar lei or crown around the balloon stack of the locomotive. The construction was made possible by pledging the company's most valuable land in the Des Moines River valley for two dollars an acre. The CIVIL WAR ended all further construction except for a feeder line called the Cedar Falls and Minnesota Railroad. This line had been incorporated on April 16, 1858 by Platt SMITH and others who were also involved with the Dubuque and Sioux City Railroad.

In 1863 the Dubuque and Sioux City constructed Dubuque's first major passenger railroad station. Located at Iowa and Jones STREETS, the 32' by 275' passenger shelter on the west side of the tracks contained passenger and baggage rooms, ticket office and two additional offices. Located on either side of the entrance to the passenger room were rose windows. Freight and passenger cars were stored in the south end. The company also sold 107,000 acres along the Des Moines River in November 1863.

The railroad's freight depot by 1864 was too small to handle the volume of business. A contractor was hired to build an addition 250 feet long, forty feet wider, and ten feet higher on the southern end of the present building. Work was to start during early March.

On April 16, 1866 the first train reached Iowa Falls from Dubuque. A large crowd of people met the train at its arrival and a three-day celebration was held with a special excursion train running between the two cities. Both the Dubuque Herald and Dubuque Times carried stories of the celebration including evening entertainment, dinner and dancing were held at Sayer's Hall. The following day the excursion returned to Dubuque where another grand celebration was held.

Despite the celebration, the fact remained that the Dubuque and Sioux City was only half way across the state. Other lines were making much greater progress. Concerned that the ILLINOIS CENTRAL RAILROAD would lose interest in the Dubuque and Sioux City line, Platt Smith suggested to John Douglas, the first president of the Illinois Central, a way of increasing their joint traffic in livestock to Chicago.