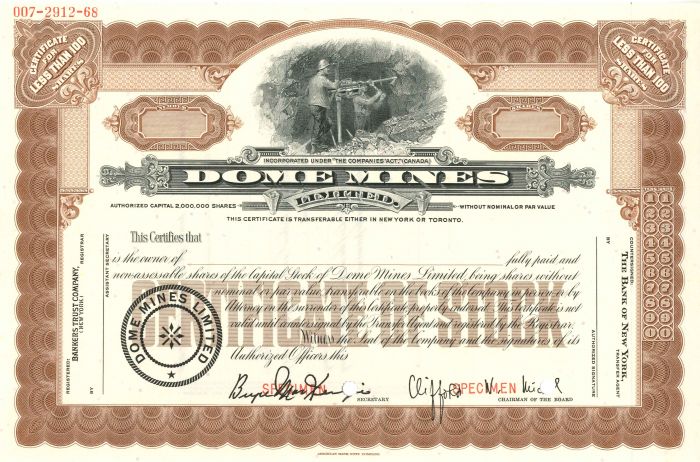 The Dome Mine in Canada, on which Dome Mines Limited was built, is still producing gold after more than 80 years, and the Campbell Mine of Campbell Red Lake Mines Limited is one of the highest-grade gold mines in the world, producing continuously since 1949. Placer Development Limited's first earnings came from dredging gold from the Bulolo River in New Guinea in the South Pacific during the 1930s. In order to image_1_small.jpg (6017 bytes)accomplish this project, the disassembled dredges were flown from the coast over the mountains to the interior of the country because there were no roads, in what was then the greatest peacetime airlift ever undertaken. On this side of the Pacific, Dome Mines grew with the startup of Sigma Mines in Val d'Or, Quebec.

In 1946, Campbell Red Lake Mines in northwestern Ontario was added, and later, the Kiena Mine in Val d'Or. Dome Mines also developed two more mines in northern Ontario, Detour Lake and Dona Lake. Since then, Placer Dome has continued to develop mines in Canada and throughout the world. Today, Vancouver based Placer Dome operates 16 mines in Canada, the United States, Chile, Australia and Papua New Guinea and is actively exploring for gold in more than 20 countries on five Continents. For Placer Dome, the 21st century looks just as bright as its first century in Canada.

Dome Mine is situated in the City of Timmins, Ontario, Canada; and was developed during the Porcupine Gold Rush.

It is now known as part of GoldCorp - Porcupine Gold Mines. The original Dome Mine (Tisdale Township) was discovered by Jack Wilson of the Harry Preston crew in 1909, was still operating as of April 2016. Its life is slowly coming to an end this year as the ore is dwindling and quickly becoming exhausted. An enormous discontinued open pit (Super Pit), huge man-made mountain of waste rock and working mill are now in place at the location. At one time a community of approximately 60 houses owned by Dome Mines and leased to miners with families existed. This was the community of Dome.

The vein Preston discovered dripped with gold and was referred to as the Golden Staircase. The property was developed using open-pit mining for the first 200 feet, then resorted to hard rock mining. The company was capitalized in 1910 and produced 247 tons of high-grade ore its first year.

After the Porcupine Fire of 1911, the mine was rebuilt such that by March 1912, a 40-stamp mill was processing 400 tons a day. The mine was incorporated in 1912 and acquired Dome Extension in 1916. Ambrose Monell, Joseph Delamar, and Jules Bache served as presidents. A rich ore body was discovered at the 23-level of the Dome Extension in 1933.