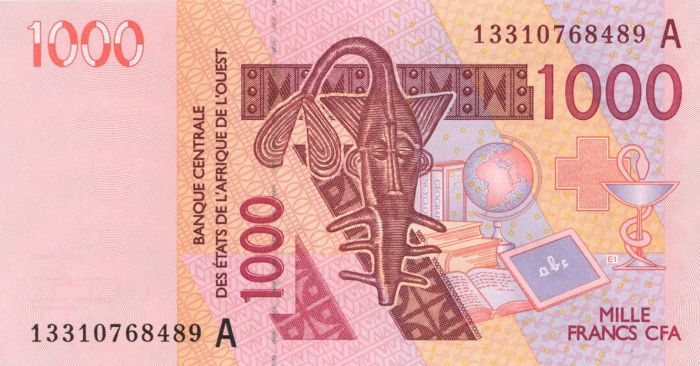 The CFA franc was created on 26 December 1945, along with the CFP franc. The reason for their creation was the weakness of the French franc immediately after World War II. When France ratified the Bretton Woods Agreement in December 1945, the French franc was devalued in order to set a fixed exchange rate with the US dollar. New currencies were created in the French colonies to spare them the strong devaluation, thereby making it easier for them to import goods from France (and simultaneously making it harder for them to export goods to France). French officials presented the decision as an act of generosity. René Pleven, the French Minister of Finance, was quoted as saying -

In a show of her generosity and selflessness, metropolitan France, wishing not to impose on her far-away daughters the consequences of her own poverty, is setting different exchange rates for their currency.

Ivory Coast, also known as Côte d'Ivoire, officially the Republic of Côte d'Ivoire, is a country on the southern coast of West Africa. Its political capital is Yamoussoukro, in the centre of the country; while its largest city and economic centre is the port city of Abidjan. It borders Guinea to the northwest, Liberia to the west, Mali to the northwest, Burkina Faso to the northeast, Ghana to the east, and the Gulf of Guinea (Atlantic Ocean) to the south. Its official language is French, and indigenous languages are also widely used, including Bété, Baoulé, Dioula, Dan, Anyin, and Cebaara Senufo. In total, there are around 78 different languages spoken in Ivory Coast. The country has a religiously diverse population, including numerous followers of Christianity, Islam, and indigenous faiths.

Before its colonization by Europeans, Ivory Coast was home to several states, including Gyaaman, the Kong Empire, and Baoulé. The area became a protectorate of France in 1843 and was consolidated as a French colony in 1893 amid the European scramble for Africa. It achieved independence in 1960, led by Félix Houphouët-Boigny, who ruled the country until 1993. Relatively stable by regional standards, Ivory Coast established close political-economic ties with its West African neighbours while maintaining close relations with the West, especially France. Its stability was diminished by a coup d'état in 1999, then two civil warsfirst between 2002 and 2007 and again during 20102011. It adopted a new constitution in 2000.

Ivory Coast is a republic with strong executive power vested in its president. Through the production of coffee and cocoa, it was an economic powerhouse in West Africa during the 1960s and 1970s, then experienced an economic crisis in the 1980s, contributing to a period of political and social turmoil. It was not until around 2014 that it's gross domestic product again reached the level of its peak in the 1970s. In 2020, Ivory Coast was the world's largest exporter of cocoa beans and had high levels of income for its region. In the 21st century, the Ivorian economy has been largely market-based; it still relies heavily on agriculture, with smallholder cash-crop production predominating.