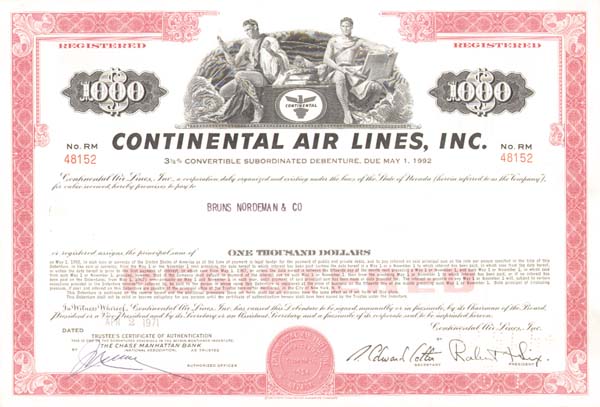 Continental Airlines was a major United States airline founded in 1934 and eventually headquartered in Houston, Texas. It had ownership interests and brand partnerships with several carriers.

Continental started out as one of the smaller carriers in the United States, known for its limited operations under the regulated era that provided very fine, almost fancy, service against the larger majors in important point-to-point markets, the largest of which was Chicago/Los Angeles. However, deregulation in 1978 changed the competitive landscape and realities, as noted by Smithsonian Airline Historian R.E.G. Davies, "Unfortunately, the policies that had been successful for more than forty years under (Robert) Six's cavalier style of management were suddenly laid bare as the cold winds of airline deregulation changed all the rules -- specifically, the balance between revenues and expenditures."

In 1981, Texas International Airlines acquired a controlling interest in Continental. The companies were merged in 1982, moved to Houston, and grew into one of the country's largest carriers despite facing financial and labor issues, eventually becoming one of the more successful airlines in the United States.

The airline was acquired by UAL Corporation, the parent company of United Airlines, in an all-stock transaction on October 1, 2010. Continental's shareholders received 1.05 per share in United stock for each Continental share they owned. Upon completion of the acquisition, UAL Corporation changed their name to United Continental Holdings. During the integration period, each airline ran a separate operation under the direction of a combined leadership team, based in Chicago. The integration was completed on March 3, 2012. Although the merged airline retained the United name, it uses Continental's operating certificate and livery. On June 27, 2019, United changed its parent company name from United Continental Holdings to United Airlines Holdings.

Item ordered may not be exact piece shown. All original and authentic.
OUT OF STOCK
Request re-stock notice?
Email this to a friend
Request Info
Previous Item (City of Fort Wayne - $1,000 - Bond)    (Douglas Aircraft Co., Inc. - Bond) Next Item