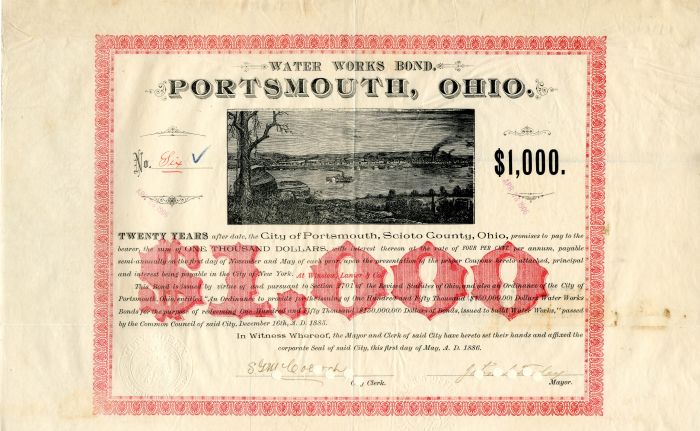 Portsmouth is a city in and the county seat of Scioto County, Ohio, United States. Located in southern Ohio 41 miles (66 km) south of Chillicothe, it lies on the north bank of the Ohio River, across from Kentucky, just east of the mouth of the Scioto River. The population was 20,226 at the 2010 census. Portsmouth also stands as the state's 88th most populated city.

The area was occupied by Native Americans as early as 100 BC, as indicated by the Portsmouth Earthworks, a ceremonial center built by the Ohio Hopewell culture between 100 and 500 AD.

According to early 20th-century historian Charles Augustus Hanna, a Shawnee village was founded at the site of modern-day Portsmouth in late 1758, following the destruction of Lower Shawneetown by floods.

European-Americans began to settle in the 1790s after the American Revolutionary War, and the small town of Alexandria was founded. Located at the confluence, Alexandria was flooded numerous times by the Ohio and the Scioto rivers.

In 1796, Emanuel Traxler became the first person to permanently occupy land in what would later be known as Portsmouth, after the United States gained its independence.

In 1803, Henry Massie found a better location slightly east and somewhat removed from the flood plains. He began to plot the new city by mapping the streets and distributing the land. Portsmouth was founded in 1803 and was established as a city in 1815. It was designated as the county seat. Settlers left Alexandria, and it soon disappeared. Massie named Portsmouth after the town of Portsmouth in New Hampshire.

The Ohio state legislature passed "Black Laws" in 1804 that restricted movement of free blacks and required persons to carry papers, in an effort to dissuade blacks from settling in the state. These provisions were intermittently enforced by local governments and law enforcement, and sometimes used as an excuse to force African Americans out of settlements. In 1831, Portsmouth drove out African Americans from the city under this pretext. Many settled several miles north in what became known as Huston's Hollow, along the Scioto River. Its residents, especially Joseph Love and Dan Lucas, provided aid to refugee slaves in the following years and assisted them in moving north.

Although southern Ohio was dominated in number by anti-abolitionist settlers from the South, some whites also worked to improve conditions for blacks and aid refugee slaves. Portsmouth became important in the antebellum years as part of the Underground Railroad. Fugitive slaves from Kentucky and other parts of the South crossed the Ohio River here. Some found their future in Portsmouth; others moved north along the Scioto River to reach Detroit, Michigan, and get further away from slave catchers. Many continued into Canada to secure their freedom. A historical marker near the Grant Bridge commemorates this period of Portsmouth's history. James Ashley of Portsmouth continued his activism and pursued a political career. After being elected to Congress, he wrote the Thirteenth Amendment, which abolished slavery in 1865 after the American Civil War.

Portsmouth quickly developed an industrial base due to its location at the confluence of the Ohio and Scioto rivers. Early industrial growth included having meat packing and shipping facilities for Thomas Worthington's Chillicothe farm, located north of Portsmouth on the Scioto River. The city's growth was stimulated by completion of the Ohio and Erie Canal in the 1820s and 1830s, which provided access to the Great Lakes, opening up northern markets.

But the construction of the Norfolk and Western (N&W) railyards beginning in 1838 and the completion of the Baltimore and Ohio Railroad (B&O) junction at the city in the late 1850s quickly surpassed the canal in stimulating growth. The railroads soon carried more freight than the canal, with the B&O connecting the city to the Baltimore and Washington, DC markets. By the end of the 19th century, Portsmouth became one of the most important industrial cities on the Ohio River between Pittsburgh, Pennsylvania and Cincinnati, Ohio. It became an iron and steel factory town with new companies like the Portsmouth Steel Company.

The city's growth continued. By 1916, during World War I, Portsmouth was listed as being a major industrial and jobbing center, the fourth-largest shoe manufacturing center in the country, and the largest manufacturer of fire and paving bricks in the United States. Wheeling-Pittsburgh Steel (later called Empire-Detroit Steel) employed over one thousand people. There were 100 other manufacturing companies producing goods from furniture to engines.

Such industrial and shipping growth greatly benefited Boneyfiddle (a west-end neighborhood in Portsmouth), where grand buildings were constructed with the wealth from the commerce. As time passed, much of the commerce began to move toward Chillicothe Street, which has continued as the main thoroughfare of Portsmouth. While Boneyfiddle is receiving new life, it is a shadow of its former self.

The city population peaked at just over 42,000 in 1930 (see "Demographics", below). In 1931, the Norfolk Southern Corporation built a grand, art deco passenger station in Portsmouth, that provided a substantial entry to the city. It was located at 16th and Findlay streets. Passengers used the station for access to both interstate and intrastate train lines, which provided basic transportation for many. The widespread availability of affordable automobiles and changing patterns resulted in reduction in rail passenger traffic here and nationally. The station was later used for offices and its keys were turned over to Scioto County in 2003, and the building was demolished in 2004.

Suburbanization also affected the city. By the 1950 census, the population had begun to decline, falling below 40,000. Some of this change was due to the effects of highway construction, which stimulated suburban residential development in the postwar years. But during the late 20th century, foreign competition and industrial restructuring resulted in the loss of most of the industrial jobs on which Portsmouth's economy had been based; the jobs were moved out of the area, with many going overseas.

Further decline occurred in 1980, following the suspension of operations at Empire Detroit Steel's Portsmouth Works, which took place after the sale of the steel plant to Armco Steel. Armco Steel closed the plant because they did not want to replace the obsolete, Open Hearth Furnaces with the more efficient basic oxygen steel furnaces. The plant also needed a continuous caster to replace the obsolete soaking pits and blooming mill in 1995. When the steel mill was closed, 1,300 steelworkers were laid off.