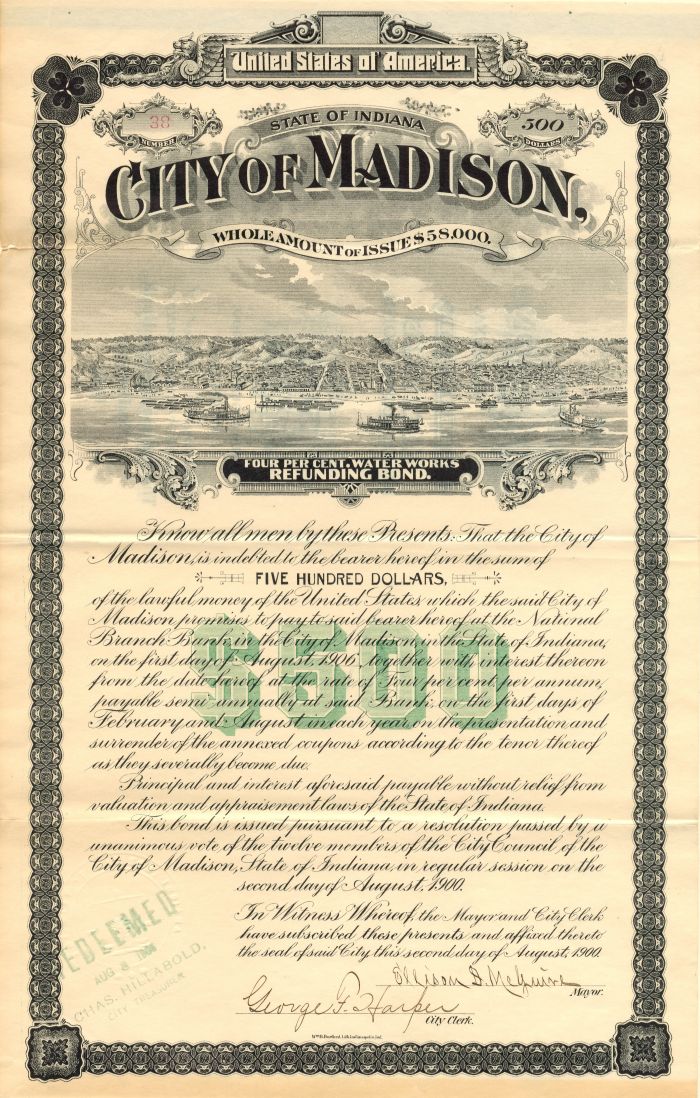 Madison is a city in and the county seat of Jefferson County, Indiana, United States, along the Ohio River. As of the 2010 United States Census its population was 11,967. Over 55,000 people live within 15 miles (24 km) of downtown Madison. Madison is the largest city along the Ohio River between Louisville and Cincinnati. Madison is one of the core cities of the Louisville-Elizabethtown-Madison metroplex, an area with a population of approximately 1.5 million. In 2006, the majority of Madison's downtown area was designated the largest contiguous National Historic Landmark in the United States133 blocks of the downtown area is known as the Madison Historic Landmark District.

Madison was laid out and platted in 1810, and the first lots were sold in 1811 by John Paul. It had busy early years due to heavy river traffic and its position as an entry point into the Indiana Territory along the historic Old Michigan Road. Madison's location across the Ohio River from Kentucky, a slave state, made it an important location on the Underground Railroad, which worked to free fugitive slaves. George DeBaptiste's barbershop in town became a nerve center of the local group. By 1850, Madison was the third-largest city in Indiana (after New Albany and Indianapolis), and among the 100 largest cities in the U.S.

Indiana's first railroad, the Madison & Indianapolis Railroad, was built there from 1836 to 1847. Chartered in 1832 by the Indiana State Legislature as the Madison Indianapolis & Lafayette Railroad, and construction begun September 16, 1836, the railroad was transferred to private ownership on January 31, 1843, as the Madison & Indianapolis Railroad. Successful for more than a decade, the railroad went into decline and was sold at foreclosure in 1862, renamed the Indianapolis & Madison Railroad, and after a series of corporate transfers, became part of the massive Pennsylvania Railroad system in 1921. In March 1924, the Madison Area Chamber of Commerce was founded to aid area business growth and development. Conrail much later bought Pennsylvania Railroad, but the deal left out a 26-mile (42 km) stretch of track from North Vernon to Madison. Madison Port Authority purchased this, forming Madison Railroad in 1975.

Madison's days as a leading Indiana city were numbered, however, when river traffic declined and new railroads built between Louisville, Indianapolis, and Cincinnati tapped into Madison's trade network. As a result, Madison's growth did not continue at the same pace it had experienced before the Civil War. During the late nineteenth century, many new buildings were still being built, but in many cases older structures were modernized by adding cast-iron storefronts and ornamental sheet metal cornices. Some earlier buildings survived without major alterations, and the Madison National Landmark Historic District today contains examples of all the major architectural styles of the nineteenth and early twentieth centuries, from Federal to Art Moderne.

On January 11, 1992, Shanda Sharer was murdered in the city by four teenage girls.

Downtown Madison was granted National Historic Landmark District status in early 2006. On August 25, 2006, just months after the designation, a blaze severely damaged two historic downtown buildings, the Madison Elks Lodge and a former city hall building that was occupied by an insurance company.

On May 20, 2009, the newly painted dome of the Jefferson County Courthouse caught fire. The blaze started around 6:15 pm. Smoke billowed hundreds of feet into the air and flames rose out of the clock tower. The fire continued to burn for hours. Fire officials reported that the fire was tentatively under control just before 9:45 pm. No major injuries were reported. The dome of the courthouse was being painted in celebration of Madison's bicentennial. On May 28, 2009, the ruined dome was removed from the top of the courthouse in two pieces. Authorities stated that the cause of the fire was a contractor using an open-flame propane torch to solder two pieces of copper together in one of the built-in gutters on the north side of the roof.

The 1974 Super Outbreak is the second-largest tornado outbreak on record for a single 24-hour period. From April 3 to April 4, 1974, there were 148 tornadoes confirmed in 13 states, including Illinois, Indiana, Michigan, Ohio, Kentucky, Tennessee, Alabama, Mississippi, Georgia, North Carolina, Virginia, West Virginia, and New York; and the Canadian province of Ontario. It extensively damaged approximately 900 square miles (2,300 km2) along a total combined path length of 2,600 miles (4,200 km). The 1974 Super Outbreak remains the most outstanding severe convective weather episode of record in the continental United States. The outbreak far surpassed previous and succeeding events in severity, longevity and extent.

Shortly after an F-5 tornado struck Depauw, northwest of Louisville, the Hanover/Madison F4 twister formed near Henryville and traveled through Jefferson County, leveling many structures in the town of Hanover and in Madison. Eleven were killed in this storm, while an additional 300 were injured. According to WHAS-TV in Louisville, 90% of Hanover was destroyed or severely damaged, including the Hanover College campus. Despite the fact that no one was killed or seriously injured at the college, all but one of the college's 33 buildings were damaged, including two that were completely destroyed and six that sustained major structural damage. Hundreds of trees were downed, completely blocking every campus road. All utilities were knocked out and communication with those off campus was nearly impossible. Damage to the campus alone was estimated at about $10 million. In Madison, seven fatalities took place, and about 300 homes were destroyed; the tornado also brushed the community of China, causing additional fatalities.

The same storm would later strike the Cincinnati area, producing multiple tornadoes including another F5.