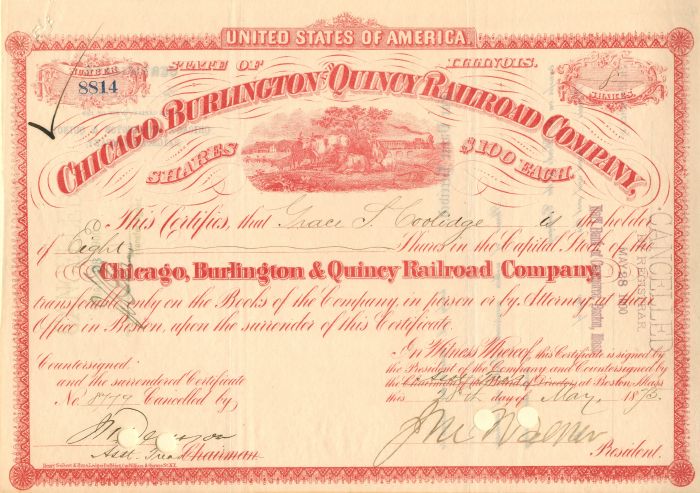 The Chicago, Burlington and Quincy Railroad (reporting mark CBQ) was a railroad that operated in the Midwestern United States. Commonly referred to as the Burlington Route, the Burlington, or as the Q, it operated extensive trackage in the states of Colorado, Illinois, Iowa, Missouri,Nebraska, Wisconsin, Wyoming, and also i Texas through subsidiaries Colorado and Southern Railway, Fort Worth and Denver Railway, and Burlington-Rock Island Railroad. Its primary connections included Chicago, MinneapolisSaint Paul, St. Louis, Kansas City, and Denver. Because of this extensive trackage in the midwest and mountain states, the railroad used the advertising slogans "Everywhere West", "Way of the Zephyrs", and "The Way West".

In 1967, it reported 19,565 million net ton-miles of revenue freight and 723 million passenger miles; corresponding totals for C&S were 1,100 and 10 and for FW&D were 1,466 and 13. At the end of the year, CB&Q operated 8,538 route-miles, C&S operated 708, and FW&D operated 1362 (these totals may or may not include the former Burlington-Rock Island Railroad). In 1970, it merged with the Northern Pacific Railway and the Great Northern Railway to form the Burlington Northern Railroad.

The earliest predecessor of the Chicago, Burlington and Quincy, the Aurora Branch Railroad, was chartered by act of the Illinois General Assembly on October 2, 1848. The charter was obtained by citizens of Aurora and Batavia, Illinois, who were concerned that the Galena and Chicago Union Railroad would bypass their towns in favor of West Chicago on its route; at the time, that was the only line running west from Chicago. The Aurora Branch was built from Aurora, through Batavia, to Turner Junction in what is now West Chicago. The line was built with old strap rail and minimal, if any, grading. Using a leased locomotive and cars, the Aurora Branch ran passenger and freight trains from Aurora to Chicago via its own line from Aurora to Turner Junction and one of the G&CU's two tracks east from there to Chicago. The G&CU required the Aurora Branch to turn over 70 percent of their revenue per ton-mile handled on that railroad; as a result, in the mid-1850s, surveys were ordered to determine the best route for a railroad line to Chicago.

The line from Aurora to Chicago was built through the fledgling towns of Naperville, Lisle, Downers Grove, Hinsdale, Berwyn, and the west side of Chicago. It was opened in 1864, and passenger and freight service began. Regular commuter train service started in 1864 and remains operational to this day, making it the oldest surviving regular passenger service in Chicago. Both the original Chicago line, and to a much lesser extent, the old Aurora Branch right of way, are still in regular use today by the Burlington's present successor BNSF Railway.

The company was renamed Chicago and Aurora Railroad on June 22, 1852, and given expanded powers to extend from Aurora to a point north of LaSalle; this extension, to Mendota, was completed on October 20, 1853. Another amendment, passed February 28, 1854, authorized the company to build east from Aurora to Chicago via Naperville, and changed its name to Chicago and Southwestern Railroad. The latter provision was never acted upon, and was repealed by an act of February 14, 1855, which instead reorganized the line as the Chicago, Burlington and Quincy Railroad.

With a steady acquisition of locomotives, cars, equipment, and trackage, the Burlington Route was able to enter the trade markets in 1862. From that year to date, the railroad and its successors have paid dividends continuously, and never run into debt or defaulted on a loanthe only Class I U.S. railroad for which this is true.

After extensive trackwork was planned, the Aurora Branch changed its name to the Chicago and Aurora Railroad in June 1852, and to Chicago, Burlington, and Quincy Railroad in 1856, and shortly reached its two other namesake cities, Burlington, Iowa and Quincy, Illinois. In 1868 CB&Q completed bridges over the Mississippi River both at Burlington, Iowa, and Quincy, Illinois giving the railroad through connections with the Burlington and Missouri River Railroad (B&MR) in Iowa and the Hannibal & St. Joseph Railroad (H&StJ) in Missouri. In 1860 the H&SJ carried the mail to the Pony Express upon reaching the Missouri River at St. Joseph, Missouri. In 1862 The first Railway Post Office was inaugurated on the H&StJ to sort mail on the trains way across Missouri.

The B&MR continued building west into Nebraska as a separate company, the Burlington & Missouri River Rail Road, founded in 1869. During the summer of 1870 it reached Lincoln, the newly designated capital of Nebraska and by 1872 it reached Kearney, Nebraska. That same year the B&MR across Iowa was absorbed by the CB&Q. By the time the Missouri River bridge at Plattsmouth, Nebraska was completed the B&MR in Nebraska was well on its way to the Mile High city of Denver, Colorado. That same year, the Nebraska B&MR was purchased by the CB&Q, which completed the line to Denver by 1882.

Burlington's rapid expansion after the American Civil War was based upon sound financial management, dominated by John Murray Forbes of Boston and assisted by Charles Elliott Perkins. Perkins was a powerful administrator who eventually forged a system out of previously loosely held affiliates, virtually tripling Burlington's size during his presidency from 1881 to 1901.

Ultimately, Perkins believed the Burlington Railroad must be included into a powerful transcontinental system. Though the railroad stretched as far west as Denver and Billings, Montana, it had failed to reach the Pacific Coast during the 1880s and 1890s, when construction was less expensive. Though approached by E. H. Harriman of the Union Pacific Railroad, Perkins felt his railroad was a more natural fit with James J. Hill's Great Northern Railway. With its river line to the Twin Cities, the Burlington Route formed a natural connection between Hill's home town (and headquarters) of St. Paul, Minnesota, and the railroad hub of Chicago. Moreover, Hill was willing to meet Perkins' $200-a-share asking price for the Burlington's stock. By 1900, Hill's Great Northern, in conjunction with the Northern Pacific Railway, held nearly 100 percent of Burlington's stock.

The only major strike in the line's history came in 1888, the Burlington railway strike of 1888. Unlike most strikes, which were based on unskilled workers, this one was based on the highly skilled well-paid engineers and firemen, a challenge to management prerogatives. A settlement would have been much cheaper, but President Perkins was determined to assert ownership rights and destroy the union threat. The fight dragged on 10 months before the financially and emotionally exhausted strikers finally gave up, and Perkins declared a total victory. However, he had spent heavily on strikebreakers, lawsuits, and police protection, hurting the balance sheets and putting the railroad in a poor position to face the nationwide depression of the Panic of 1893.

Following the purchase of the Burlington by GN and NP, expansion continued. In 1908, the CB&Q purchased both the Colorado & Southern and Fort Worth & Denver Railways, giving it access south to Dallas and the Gulf of Mexico ports in Houston and Galveston. It also extended its reach south in the Mississippi Valley region by opening up a new line from Concord, Illinois south to Paducah, Kentucky. It was during this period that the Burlington was at its largest, exceeding just over 12,000 route miles in 14 states by the 1920s. With the First World War having the same effect on the railroad as on all other railroads, during the 1920s, the Burlington Route had an increasingly heavy amount of equipment flooding the yards. With the advent of the Great Depression, the CB&Q held a good portion of this for scrap. Despite the decrease of passengers, it was during this time that the railroad introduced the famed Zephyrs.

As early as 1897, the railroad had been interested in alternatives to steam power, namely, internal-combustion engines. The railroad's shops in Aurora had built an unreliable three-horsepower distillate motor in that year, but it was hugely impractical (requiring a massive 6,000-pound flywheel) and had issues with overheating (even with the best metals of the day, its cylinder heads and liners would warp and melt in a matter of minutes) and was therefore impractical. Diesel engines of that era were obese, stationary monsters and were best suited for low-speed, continuous operation. None of that would do in a railroad locomotive; however, there was no diesel engine suitable for that purpose then.

Always innovating, the railroad both purchased "doodlebug" gas-electric combine cars from Electro-Motive Corporation and built their own, sending them out to do the jobs of a steam locomotive and a single car. With good success in that field, and after having purchased and tried a pair of General Electric steeple-cab switchers powered by distillate engines, Burlington president Ralph Budd requested of the Winton Engine Company a light, powerful diesel engine that could stand the rigors of continuous, unattended daily service.

The experiences of developing these engines can be summed up shortly by General Motors Research vice-president Charles Kettering: "I do not recall any trouble with the dip stick." Ralph Budd, accused of gambling on diesel power, chirped that "I knew that the GM people were going to see the program through to the very end. Actually, I wasn't taking a gamble at all." The manifestation of this gamble was the eight-cylinder Winton 8-201A diesel, a creature no larger than a small Dumpster, that powered the Burlington Zephyr (built 1934) on its record run and opened the door for developing the long line of diesel engines that has powered Electro-Motive locomotives for the past seventy years.

After the Second World War, the CB&Q had overworked steam locomotives in a fleet which it was beginning to convert to diesel engines. The company rapidly expanded its diesel program and slowly took steam locomotives out of service. On September 28, 1959, the last steam-powered commuter train from Chicago rolled to a stop in Downers Grove, marking the end of steam passenger operations on the railroad. The last steam in regular revenue service was CB&Q Subsidiary C&S, which operated locomotive 641 until 1962 to serve the Climax Mine near Leadville, Colorado (internal combustion engines were not as effective as steam locomotives due to the high altitude of the mine.)

As the financial situation of American railroading continued to decline through the 1960s, forcing restructuring across the country, the Burlington Railroad merged with the Great Northern, Northern Pacific, and the Spokane, Portland and Seattle railroads on March 2, 1970 to form the Burlington Northern (26 years later, the BN and Santa Fe Railroads merged to become BNSF). Passenger service was markedly reduced, as people had shifted to using private automobiles for many trips.

The railroad operated a number of streamlined passenger trains known as the Zephyrs which were one of the most famous and largest fleets of streamliners in the United States. The Burlington Zephyr, the first American diesel-electric powered streamlined passenger train, made its noted "dawn-to-dusk" run from Denver, Colorado, to Chicago, Illinois, on May 26, 1934. On November 11, 1934, the train was put into regularly scheduled service between Lincoln, Nebraska, and Kansas City, Missouri. Although the distinctive, articulated stainless steel trains were well known, and the railroad adopted the "Way of the Zephyrs" advertising slogan, they did not attract passengers back to the rails en masse, and the last one was retired from revenue service with the advent of Amtrak.

Other named passenger trains which operated on the Burlington included:

The California Zephyr is still operated daily today by Amtrak as trains Five (westbound) and Six (eastbound). Another Amtrak train, the Illinois Zephyr, is a modern descendant of the Kansas City Zephyr and the American Royal Zephyr services.

The railroad had one of the first hump classification yards at its Cicero Avenue Yard in Chicago, allowing an operator in a tower to line switches remotely and allowing around-the-clock classification.