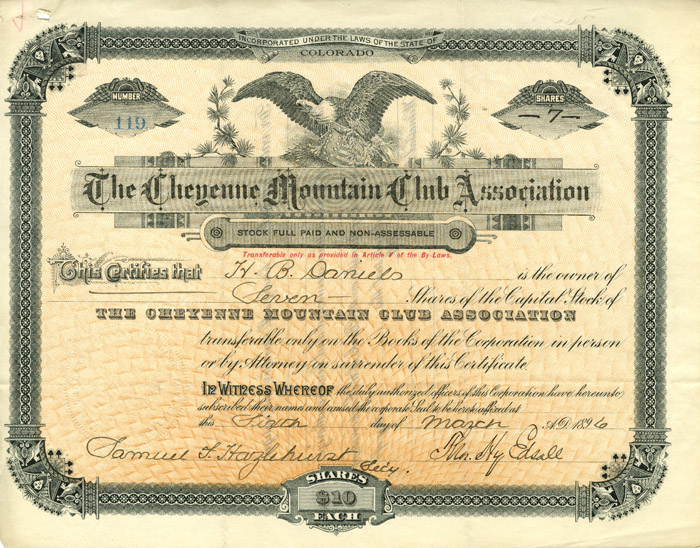 Cheyenne Mountain is a triple-peaked mountain in El Paso County, Colorado, southwest of downtown Colorado Springs. The mountain serves as a host for military, communications, recreational, and residential functions. The underground operations center for the North American Aerospace Defense Command (NORAD) was built during the Cold War to monitor North American airspace for missile launches and Soviet military aircraft. Built deep within granite, it was designed to withstand the impact and fallout from a nuclear bomb. Its function broadened with the end of the Cold War, and then many of its functions were transferred to Peterson Air Force Base in 2006.

Cheyenne Mountain has three peaks. The southern peak is Cheyenne Mountain's summit at 9,200 feet (2,800 m) in elevation. It was formerly called Mount Albrecht. The antenna farm sits on the middle peak. The northern peak, The Horns, may look to some like the head of a dragon or horns. The peak is 9,200 feet (2,800 m) in elevation.

The mountain's boundaries are Rock Creek, which flows from Mount Big Chief through Cheyenne Mountain to the town of Fountain, to the south and Cheyenne Cañon to the north. The western side of Cheyenne Mountain is in Pike National Forest, within the Pikes Peak Ranger District. Colorado Springs' skyline features Cheyenne Mountain and Pikes Peak. Other mountain peaks are Mount Arthur, Mount Baldy, Mount Rosa, Cameron's Cone, and Mount Garfield.

William Dixon, a rancher, claimed a homestead in the Cheyenne Mountain foothills in 1867. He built a tavern along a trail up Cheyenne Mountain and turned the trail into a toll road, now called Old Stage Road, to Cripple Creek. The road begins as a paved road and is then a dirt road through Pike National Forest. His homestead ultimately became part of The Broadmoor resort.

Grace Lutheran Church built a retreat in Emerald Valley in 1904. It is now The Broadmoor's Ranch at Emerald Valley. In 1905, Dr. August McKay homesteaded on 120 acres on the east slope of Cheyenne Mountain. He developed a series of trails and rest houses that led to The Sunshine Inn that he built as a health resort above Old Stage Road. The property was purchased by Spencer Penrose, who had the inn torn down.

The Overlook Colony was started in 1911 by a group of Colorado College professors. It first started as a summer retreat for the educators, and grew to include musicians, doctors, artists, generals, oilmen, and an ambassador to India. The Cheyenne Mountain Zoo was built just below and the Will Rogers Shrine built just above this community. Residents manage the Overlook Colony Mutual Water Company that governs water conservation, maintenance, and testing of the water supply from deep within the former Little Susie gold mine.

In the 1950s, during the Cold War, the interior of the mountain became a site for the operations center for the North American Aerospace Defense Command (NORAD). The center, deep within Cheyenne Mountain, was completed in 1966 after spending $142 million and using 500 tons of explosives. The result was an underground city operated by the Air Force. Popular Science wrote in 1965, before the dedication of the facility, that Cheyenne Mountain would be the only mountain to have buildings constructed within its interior. It was built to withstand being bombed: eleven multiple-story buildings stand on coil springs to absorb the shock of a blast, and care was taken to make sure that up to 800 people could survive a nuclear exchange. The buildings are encased in steel, surrounded by granite, and the facility is behind blast-proof doors. It was designed to be the "nerve center" for NORAD.

The NORAD center has been staffed by Canadian and United States military personnel to monitor North American air space for intercontinental ballistic missiles and incoming Soviet military aircraft. Locally, this military boom during the Cold War included the establishment of the United States Air Force Academy, Peterson Air Force Base, and Fort Carson. After the Cold War, NORAD monitored objects orbiting the earth and aircraft without flight plans. It is also known for monitoring the Christmas Eve orbit of Santa Claus.

NORAD used to offer public tours, but due to security concerns they were suspended in 1999. The off-ramp on NORAD road has been staffed by Air Force Security Police since September 11, 2001. Most of the center's operations were moved to Peterson Air Force Base in Colorado Springs in 2006, then in April 2015, the Pentagon reported that a few operations would be moving back in.

During the 1950s, an antenna farm was built on the middle peak of the mountain when Bert Swisher deeded ten acres to Bud Edmonds and several backers and Swisher signed a non-compete agreement. Edmonds, John Browne, and Buck Ingersoll agreed to replace the trails to the area with a real road, which was opened in 1960 by the Cheyenne Propagation Company. There are 700 cell phone, television, radio, and law enforcement transmitters on the antenna farm. The Cheyenne Mountain radio site 145.160 repeater covers south central and southeast Colorado along the Interstate 25 corridor from Monument nearly to the New Mexico border. In 2002, it was operated by the Cheyenne Propagation Company.

The City of Colorado Springs and Colorado State Parks purchased 1,680 acres of land to preserve the "southeastern flank" of the mountain and its wildlife habitat in 2000. The land, originally the JL Ranch, was slated for development of 2,500 houses. The land was purchased to create the Cheyenne Mountain State Park, which is the only state park in El Paso County. An additional 1,021 acres at the top and east side of Cheyenne Mountain were acquired from 2007 to 2009. The park is now a total of 2,701 acres, part of which is at the base of the mountain and part of which is on Cheyenne Mountain. It has 20 miles of trails.

North Cheyenne Cañon Park was started when the city of Colorado Springs bought 640 acres in North Cheyenne Cañon from Colorado College in 1885. An additional 480 acres was donated by General William Jackson Palmer. That land included High Drive, Silver Cascade Falls, and Helen Hunt Falls. In 1909 the Park Commission called it "by far the grandest and most popular of all the beautiful cañons near the city" for its evergreen trees, waterfalls, Cheyenne Creek, and rock formations. Moderate hikes in the canon include Mount Cutler and Columbine trails.

Two historic trails, only shown on the Pikes Peak Atlas, lead to the summit top of Cheyenne Mountain: the unofficial and faintly visible Swisher and the McNeil trails. At the top of the Swisher trail is a meadow and ruins of an old cabin.