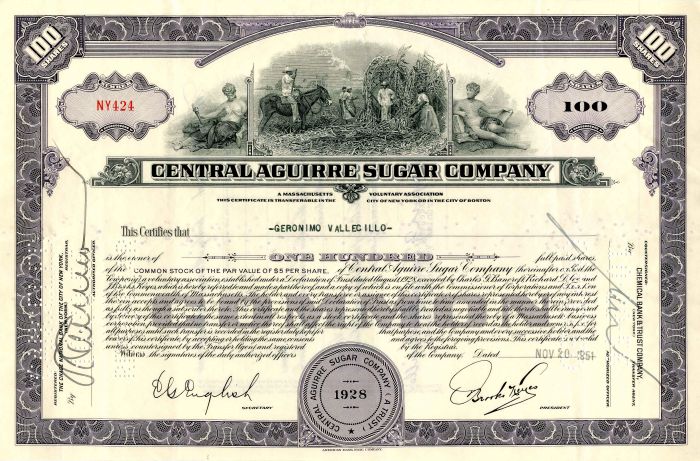 Central Aguirre was the first US owned sugar factory established on the island after the US occupation in 1898.  Before entering into specifics about Central Aguirre, it is in order to briefly explain the US capitalists interest in establishing central sugar factories in Puerto Rico at that time.  Until the Serrallés family established a sugar refining operation in 1926, there were no sugar refineries in Puerto Rico, raw sugar produced on the island was sold to sugar brokers who sold it to sugar refineries mainly in New York, where by 1870 sugar refining had become its most important industry and where in 1887 68% of the sugar consumed in the US was refined.

In 1887, falling price margins between raw and refined sugar and excessive competition prompted the failure of many of the smaller sugar refineries in the US and the consolidation of fifteen of the remaining ones into the Sugar Trust.   The Trust was organized by sugar refiner Henry O. Havemeyer and banker John Searles to achieve pretty much what John D. Rockefeller had achieved in the petroleum industry.  The Sherman Antitrust Act of 1890 put and end to the Trust form of industrial consolidation, as a result, in 1891 the American Sugar Refining Co. reorganized as a New Jersey corporation due to the legal advantages offered by that State which allowed a corporation to own stock in either in or out of State corporations.  Immediately after its creation, the Trust raised the price of refined sugar and reduced the price of raw sugar.

The Sugar Trust was successful in consolidating the industry on the East coast, in 1888 it then looked at the West to do the same when it acquired the American Sugar Refinery of California.  However, they encountered the opposition of Claus Spreckels of the California Sugar Refining Co. whose raw sugar was produced in Hawaii and entered the US duty free since 1875.  A price war promptly ensued which was finally resolved by the merger of the Havemeyer and Spreckels interests in terms favorable to both, even though Havemeyer's financial resources were about ten times greater than Spreckels'.  Spreckels capacity to resist Havemeyer's attack was due to the structure of his organization which was vertically integrated.  When Havemeyer tried to corner the market for Hawaiian sugar to leave Spreckels without raw material, he found out that it was already cornered by Spreckels who had built irrigation systems, owned sugar plantations and railroads, had a steamship line and had formed a sugar factors company on which the independent Hawaiian planters were dependent on for financing.

The Sugar Trust learned the advantages of vertical integration from the experience with Spreckels.  The lessons learned prompted the Trust's ownership in sugar factories in Puerto Rico which took a big leap forward after the Spanish-American War of 1898, as a result of which sugar from Puerto Rico had an advantage over sugar from Cuba as it entered the US duty free.

Central Aguirre and Central San Cristobal started to get organized before the Foraker Act of 1900 and the free entry of Puerto Rican products into the US market.  Because San Cristobal took a few more years to be built, Aguirre was the first sugar mill established by US investors after Puerto Rico became a US possession as a result of the Spanish American war of 1898.

The mill was originally owned by De Ford & Co., a Boston corporation founded in 1898 by a group of adventurous capitalists unrelated to the sugar refining industry, composed by William Sturgis Hooper Lothrop (1870-1905), John Dandrige Henley Luce (1855-1921), Henry DeFord and Francis Dumaresque (1854-1902).  It was established on what was then known as the 2,250 acre Hacienda Aguirre.  DeFord and Dumaresque had been sugar brokers in Boston since 1886, Luce and Lothrop had worked in the foreign banking department of Kidder, Peabody & Co.  De Ford was brother-in-law of US Senator from Massachusetts Henry Cabot Lodge, who had intervened with President William McKinley to allow De Ford & Co. to be fiscal agent of the US military government in Puerto Rico, therefor making it a formal banking entity, the first one to establish on the island after the US occupation.

Hacienda Aguirre was established in the mid 1850s by Antonio José Vazquez and his wife Enriqueta Aguilar on land granted him by the Spanish Crown.  By 1850 Hacienda Aguirre had a sugar mill and consisted of approximately 193 acres, by 1880 it had a steam driven mill and consisted of approximately 1,500 acres making the Vazquez Aguilar family the largest landowners in the area.  Upon the death of Antonio José Vazquez in the 1880s, Hacienda Aguirre was inherited by his daughter Antonia Vaquez Aguilar (1854-1894) and her husband, Spanish immigrant from Valladolid and attorney Ignacio Rodriguez Lafuente.  Besides buying Hacienda Aguirre in January 1899 for $100,000, DeFord & Co. leased with option to buy the 937 acre Hacienda Carmen, the 1,300 acre Hacienda Josefa and the 231acre Hacienda Amadeo.  They also signed contracts with other land owners or colonos to process the sugarcane grown in their lands and were 100% owners of the Ponce & Guayama Railroad Co. which they acquired for $150,000 in 1903 from the French railroad company Cía. Ferrocarrilera de Puerto Rico.

As part of its expansion, in 1909 Central Aguirre Sugar Co. acquired Central Cortada for $1,200,000 and in 1920 a 72.5% interest in the outstanding stock of Central Machete was acquired by Luce & Co. S en C, a limited partnership.  A company analysis of Central Aguirre Sugar Company in the 1921 Moody's Manual of Investments states that one of the Board members was James H. Post.  At the time, Post was also President of the National Sugar Refining Company and a member of the Board of Directors of The First National City Bank of NY, today Citibank.  The report includes Central Machete Co. (purchased January, 1920) and Luce & Co. S en C a Limited Partnership whose members were all Directors of Central Aguirre Sugar Co. as subsidiaries.

Per the report, Central Aguirre Sugar Company's return on investment (net profit/paid in capital) for the years between 1916 and 1921 was: 58%, 68%, 44%, 24%, 30% and 50%.  Total sales for the period ranged from $4.5 to $6.2 million except for 1920 when sales were an astonishing $17.5 million.  The period between 1916 and 1920 was a period of high sugar prices later known as 'the dance of the millions", created by high demand and the devastation of the European beet fields during WWI.  The extremely high annual sales in 1920 could very well have been the result of the unprecedented high price of sugar that year reaching in excess of 21¢ lb.

The sugar mill's location on the southern coast of the island with its own deep water dock on Jobos Bay, allowed for easy loading of the ships that transported sugar and molasses from Aguirre to the mainland USA, its main market.  In 1969 a Cuban conglomerate acquired Central Aguirre and its subsidiaries and began selling its lands, in 1970 the Government of Puerto acquired all the assets from the Cuban company and continued to operate Central Aguirre until 1990 when it ceased to operate for good.

A community town which still exists today, was created around the sugar mill during the first half of the 20th Century.  The hotel building is very similar to the one at ​​Guanica Centrale which, as can be seen from the pictures on that page, has been well kept and is currently in use.  Also pictured are houses where the administrators and middle management lived, still occupied and in good condition.

The sugar mill and company town which comprise The Central Aguirre Historic District, were added to the National Register of Historic Places in 2002.  The document submitting the property is a lengthy and very interesting document with substantial information regarding the beginning and history of Central Aguirre and the sugar industry in Puerto Rico as well. (From jaimemontilla.com)